Can We Get A Refund On These Lies? 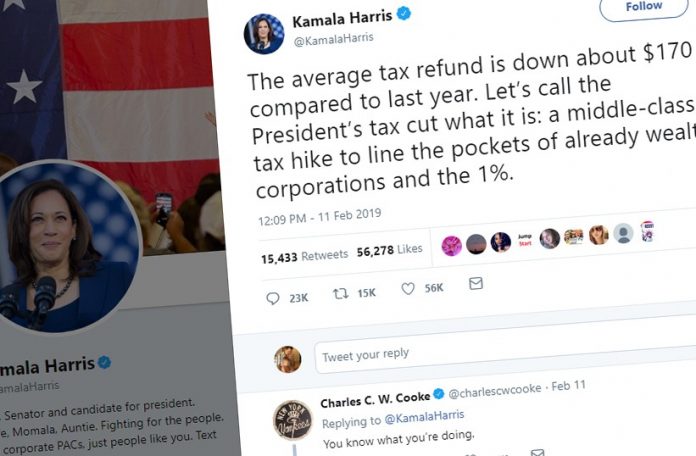 I spent an inordinate amount of time creating charts and graphics today to show just how misleading and really underhanded liberal politicians and their media can be. This is because sadly, the liberal media apparently spent about as much time creating lies and phony graphs in order to underhandedly mislead you.

Here are the facts: After the so-called “Trump tax cuts” last year, in which nearly everyone paid less tax, the tax refund amounts that U.S. citizens are receiving from the government are a tiny bit lower this year. This gave an opening for liberal politicians and media to lie about the Trump tax cuts not resulting in lower taxes when in fact they did.

So why did their graph visually present a drop of, like, 60%? Because they were misleading you.

Clearly, the bar on the right should be just 9% lower than the bar on the left — not like 60% lower. So they over-dramatized the difference. Why would they do that?

Here’s how it should look (with my editorial inserted right in it!):

When you create a chart and use the wrong base for comparison purposes, you can show whatever the hell you want. They used a base of $1,850. I can do that too. Look, I’ll show you how Excel presents the data when you use a bogus base of $1,850:

As you can see, that’s looks like the bogus CNBC chart. It it misleading. It does not demonstrate a correct comparison. Here’s the correct version, using $0.00 as the base, as it should be:

This correctly compares the two years. This is honest reporting. Theirs is misleading, at best.

Their second lie was the insinuation that that the reduction in refunds indicates people are paying more taxes rather than less. Otherwise they wouldn’t even have done this story. This is also a lie, and it’s one which tons of liberals and media everywhere are lying about. As even the Washington Post reports:

When both the Joint Tax Committee and the [left-wing –ed.] Tax Policy Center looked at the impact of the tax bill, they concluded that in 2018, most people would see an overall reduction in taxes. The Tax Policy Center found that 80.4 percent of all tax payers would have a tax cut, compared with about 5 percent experiencing a tax increase.

Refunds are not an indication of how much tax you paid. Refunds are smaller because for the first time in 30 years, as a result of the change in tax rates (lower!), the IRS, employers and payroll companies have had to (or have finally been able to) rejig the tax charts they use to calculate how much to withhold. As CNBC previously reported themselves, “Earlier this year, the Treasury Department and the IRS released updated withholding tables to reflect the new Tax Cuts and Jobs Act. “

So a smaller refund is a non-story, unless they wanted to illuminate the fact that the Trump tax cuts made paychecks bigger. And they wouldn’t want to do that.

Lots of liberals and their media are trying to deceive you on this. Democratic darling and presidential candidate Kamala Harris did CNBC one better and outright lied about it.

Let’s call a liar what she is: a liar. Even though she’s a liberal and this hardly ever happens, the Washington Post gave her — one of their darlings — four Pinocchios for this one (ignoring all her others, and ignoring the myriad lies in the rest of the media, including in the WaPo itself).

These people are taxing our patience. Alas, no refunds.