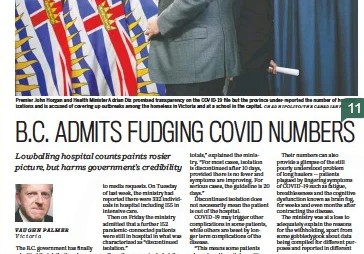 In BC it’s an NDP government, and the “news” media in BC is almost totally on-side… which is why we are only finding this out now, a year and a half after the Wuhan Virus started. And it’s why, after reading the rather breathtaking article, we find that the term “NDP” appears zero times in the whole article, even though it’s an article about the NDP government. 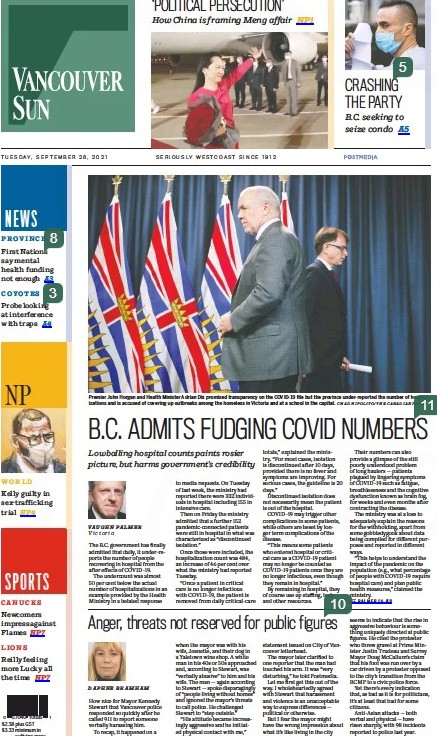 The printed front page looks Watergate bad. The governor of New York State was facing serious legal investigations and impeachment for this very thing — coincidentally for fudging in that same “50%” range. But don’t worry, the NDP’s editors — sorry the Vancouver Sun’s editors — have already softened it up in the online version of that same story with the headline “Mixed message on COVID-19 patients a blow to credibility of John Horgan’s government.”  Phew. Now it’s merely a “mixed message.” No crime there.

Columnist Vaugh Palmer wrote in uncharacteristic harshness about the messaging of the liars (liars being my word, as Palmer fails to mention either “NDP” or “lie” or “liars” in his piece because he is not as blunt as I, and he normally massages the NDP gov’s messaging, as most other BC “reporters” also dutifully do):

…The ministry was at a loss to adequately explain the reasons for the withholding, apart from some gobbledygook about data being compiled for different purposes and reported in different ways.

“This helps to understand the impact of the pandemic on the population (e.g., what percentage of people with COVID-19 require hospital care) and plan public-health measures,” claimed the ministry.

One shudders to think how long it took for the government’s vast communications apparatus to come up with a statement as worthless, as insulting, as misleading as that. …

Palmer credits reporter Penny Daflos of CTV for breaking the story, as well he should since it wasn’t him, or any other of the myriad “reporters” who bothered to show us the truth. And Penny Daflos’s story is here — written up several days ago at the CTV website. But she started on September 22 (and earlier) with this:

VANCOUVER – Just how many British Columbians are actually in hospital with COVID-19 is a tightly-held secret, with few privy to the true number as health officials keep two sets of numbers: one public, the other internal.

In any other province not led by an NDP or left-wing hack, this would be huge, national news. And Daflos goes there:

While British Columbians are kept in the dark when it comes to the true number of hospitalizations, Manitobans get the full picture daily.

…And does a little bit of a fact check:

Premier John Horgan has said his province is “as transparent as any jurisdiction in North America,” but that claim is hard to square with health officials’ repeated withholding of information.

When a reporter writes this up…

CTV News has asked the Ministry of Health for the number of patients admitted to hospital for COVID-19 but not counted in the public figures, but has not received a response.

…you’d think it would generate a massive DING DING! and a whole whack of news media reporting — a race to report it first — about what appears to be an obvious coverup or Big Lie. But this did not occur.

In another story on September 23 Daflos quotes a university professor, Damien Contandriopoulos, a public health researcher and professor at the University of Victoria, saying,

We all know too well how much the “news” media count on reliably left-wing university professors for their expert pronouncements on absolutely everything, from climate change to gender pronouns, upon which they draw their definitive science-is-settled-type “news” stories. Why not now? If it’s undemocratic (and it is), as declared by a university professor, then it should be a massive news story. But it has not been. Check the Globe and Mail for this story. It’s not there. The National Post (a sister publication of the Sun): Nothing. The state-owned CBC? If it’s there I couldn’t find it (I did find this: “B.C. backtracks on 99% vaccination claim for adults under 30 in Vancouver Coastal Health“.) It’s written up nowhere but in BC as if it’s merely a local-interest story about “mixed messages.” Aside from Palmer’s much-belated and softened piece, it’s only written up by Penny Daflos of CTV at the CTV website.

“If you look at it in the long run, when you have a government that provides numbers that people are not convinced are true, what you’ll get is people will just stop believing information that comes from that government,” [Contandriopoulos] said.

Trust the government? Yeah, that ship has long sailed (and then it sunk, and then it caused a greasy oil spill). But here we have to acknowledge at least some small segment of the news media is doing their job and earning some trust back, and, as that UVic prof said, this serves no less than democracy itself. So credit where credit is due. “Democracy dies in darkness,” as the Watergate story-breaking Washington Post darkly intones in its banner motto today.

Previous articleHey has China relaxed its restrictions on tourists from the west yet? Asking for literally nobody.
Next articleCanadians love their cheap Chinese trinkets despite the moral question