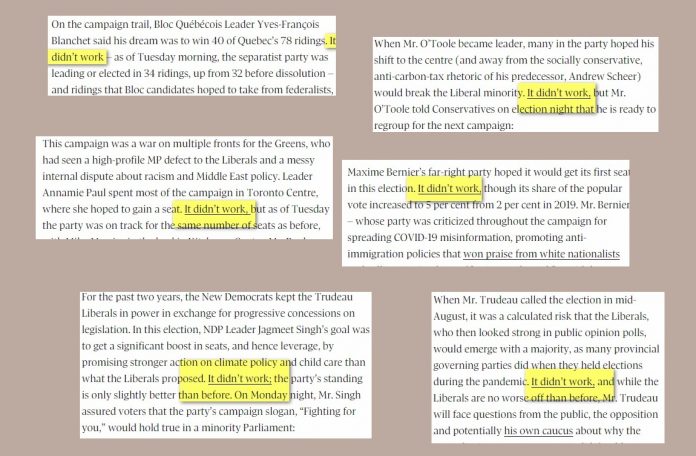 When this tawdry election was called by the liar, I actually thought about launching a campaign telling people to NOT VOTE. Nobody should vote, I thought — I still think — in a crass political power-grab election, at a time like this. This wasn’t “democracy in action,” it was a pure, crass power-grab, and that’s all it was, period. I celebrate democracy and freedom, for sure. I don’t celebrate a narcissist’s fever dream of power over you and your family.

This futile exercise was destined to serve not democracy, not freedom, not our national interests, and most certainly not unity; it was destined to serve the selfish egomaniacal dreams of only one man (if he doesn’t mind me using the term “man” — and I don’t mind saying I hesitate to use the term in his case), and his elitist, identitarian, left-wing, corrupt, wrong-headed party. And everybody knew it, and nobody cared.

Not voting is the only signal, I thought and still do, that would sink into the thick heads of these ego-driven self-satisfied jerks. Maybe next time nobody will vote.

Trudeau “won” but clearly he failed again. And it cost the country dearly. Another $600 MILLION thrown out the taxpayers’ window is not the least of it. It caused still more division when divisions in the country are threatening to further tear it apart along a least a couple of growing cracks now; it distracted us just when we needed a particularly hard focus; and it wasted our valuable time — at a time in our history and our lives when we do not have the luxury of running around the country wasting it on the frivolity of power-plays and egos and pure narcissism of those who we employ to get stuff done. And it cost us more loathing, as Justin Trudeau turned from merely condescending, trite, smug, and arrogant, into all of that plus nasty, deceptive, angry, more narcissistic than he already was, and just plain wicked to boot. He looks uglier today than he did a month ago, and that’s saying a lot.

The NDP and its leader look as ridiculous as they always have. Forget the vote — they — that whole racket — and make no mistake it’s a racket — is literally another waste of our nations’ time and money and attention.

The Conservatives? What “conservatives”, you should well ask. “Liberal Party Too” is clearly a better moniker for them, as has been now tiresomely pointed out over and over to the point where I even registered the domain name a few years ago. But the Liberal Party is hardly “liberal” these days either, what with their clearly illiberal attacks on freedom of speech, and on the rights to defend ourselves, and notable on the right to life, and also on our freedom of conscience, and our freedom from increasingly intrusive government authoritarian and totalitarian control over our lives, and so on.

The Liberals’ Globe and Mail division had a similar view of mass failure although I’m sure they could barely contain their glee at the outcome. Explaining each party’s goals and reviewing the outcome of each, even for their Liberals, they repeatedly wrote the same words, “It didn’t work.” 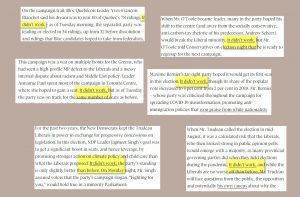 Pace the G&M’s assessment, the only person or party that did better this election was Maxime Bernier and the People’s Party of Canada, despite the “news media” (an institution which shares, with other institutions, the root cause of much of this country’s difficulties) trying to pretend he and they didn’t exist, or when they had to mention them, portraying them as evil fascists and “far right-wing” — often conflating those terms and other now-familiar derogatory fake “right-wing” terms too (like “white nationalist”). I can at least take comfort in the “news media” thus having also failed miserably in their attempt to quash Bernier and the PPC. It didn’t work, G&M, et al! But even Bernier and the PPC could be described as having ultimately failed since alas, they didn’t win one seat. And after all, the “news media” did get their guy elected, if just barely and without a solid mandate.

My own failures? I purposely didn’t spend the lead-up to this election writing about the election campaign this year, as I have over the past twenty-plus years, because I thought it was a criminally stupid, fake election. Maybe that’s a failure, and maybe that didn’t work, but I didn’t waste any time or money on it (aside from the tax dollars already wasted on it on my behalf), and I maintained my focus on my health and well-being instead of listening to those blowhards. So if that’s failing, give me more of that.

So it’s pretty bad all around. And I don’t feel particularly proud to be Canadian at this moment. I am only too well aware of all the ink that has been spilled lecturing citizens, over the centuries, on the notion that no matter what happens in a free democratic election, you should accept — nay be proud and supportive — of the outcome, as, we are told, we have succeeded in completing another important democratic exercise, the likes of which some in the world can only dream of. But as I’ve said, this was no exercise in democracy.