Trim the Fat Off The Big Fat-Ass Labor Union Morass 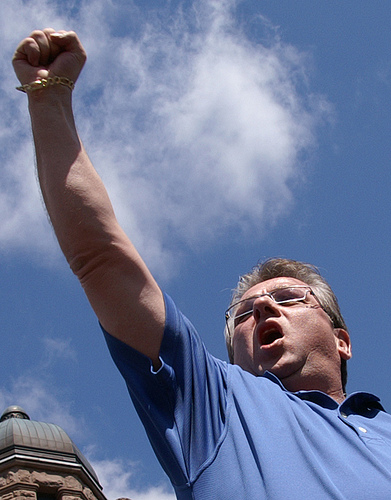 Now here’s the tired old requisite qualifier that we seem to have to include lest we be branded as right-wing radical fundamentalists, etc: I’ve been a union member, some of my best friends are union members, I respect most of the union members, on their own.

But those big labor unions they are forced to belong to, too often against their will, are a giant ass holus-bolus. I think they’re fat and corrupt. And not just because they’re political far-left progressives, political special interests and cronies, and pseudo-corporations bent on lobbying and advancing their greedy self-interests at the expense of others while also advocating the left-wing and far-left politics that further advances their rear ends. (But yeah, that all makes them bad.) It’s also the fact that despite the cheeky smile they put on for the naive of the world, they are not focused squarely on fairness and worker safety in workplaces, anymore. They do pretend to be  —  much as the liberal news media pretend to be objective. But they have posterior -sorry ulterior- motives.

And there’s a word for that: perfidy.

And the fact that people buy into it and accept it irks me.

While the liberal news media has been dropping all pretense of objectivity over the past few years (certainly since their overt obsession with getting Obama and liberals elected in the U.S. in 2008 and again this time around; and fighting Harper’s Conservative elections here), and are more and more carelessly betraying themselves as shills for the progressive left, the big labor unions have been somewhat more covert; they’ve cowered, and still hold themselves out to be that old-fashioned goodwill guardian of, well actually the whole country now.

They’ve actually always been fairly obvious to me about their real motives, even as they continue to make this tired, threadbare effort to cast themselves as the (yawn) protector of the worker, and of families, and of all of us poor souls who work for da man (yawn yawn).

Big labor unions like the CAW and the various government public sector unions and the likes of teachers’ unions are directly and rather unabashedly aligned with political parties. They own and control much of the socialist NDP in Canada and the provinces. They are bagmen for them, and carry their water (and their protest signs and election campaign signs). They even outright sponsor militant left-wing protest groups (“Occupy,” anti-Israel/pro-Palestinian, the over-entitled Quebec students, and many others; all left-wing).

They cutely pretend  —  and people buy  —  that it’s really all about “caring for the workers” and “our children,” or “patients” or “fairness” (and more recently, the word du jour: “justice,” whether it’s “economic justice” or “worker justice”, or any other kind, which all really mean “I want to work less, make more money, and get more free entitlements from government.” Oh and make “the rich” pay.). They hold up every tired, contrived canard, and pretend to be earnest representatives of the downtrodden.

Socialists? Progressives? Some seem downright Marxist to me. They’re certainly nearly all left-wing and extreme left-wing politicos  —  particularly in the public sector unions  —  and I think they consider their members to be little more than useful idiots. And many are.

I think they know  —  I think we all know  —  workers now have all the laws and regulations and entitlements and fairness and equality and wages and benefits anybody could hope for, and more, and so now, well-funded and well-endowed with power bought from politicians, unions have moved right into the core of the politics they always espoused. So they can get more.

I actually feel for the regular Joe and Jane who belong to big labor unions today, many through no choice of their own, and have basically lost lost much of the public goodwill and high esteem their jobs should normally bring them; but also lost their self-esteem, and control of their lives, and their careers, and at least their political independence if not more. They’ve also lost a good chunk of their cash to their big, far-left labor union political goons. And that’s to say nothing of the anxiety and out-of-pocket cost to families for their unions’ strikes, threats of strikes, and all that militant action of various sorts, which includes the political sort. And in some cases, they’ve priced themselves right out of a job  —  or allowed their union to make that happen. How ridiculous.

The fact that unlike in the United States, Canada has no right-to-work laws and jurisdictions, and people are instead forced by idiotic undemocratic laws agreed to by bought politicians (guess who’s buying!) to join unions and set up union shops against our will and consent, and without the freedom to make a choice on our own, makes it all the more egregious for workers and businesses. Where’s the freedom in that? This is a free country, right? Right?

…In Canada, workers can be forced to join and financially support unions with full dues payment as a condition of employment. Canadians do not enjoy the types of freedoms that workers enjoy in the 22 American RTW states [23 now with Indiana joining  –Joel]. Since labour legislation is a matter of provincial jurisdiction, my analysis shows that if provinces want to attract workers, lower unemployment, increase incomes, and attract more capital, they should move towards implementing a right-to-work law. …

We are at least still free to act against progressive idiocy. We can move to change laws protecting the big labor unions, and change the undemocratic laws forcing people to join them as a condition of getting a job. And allow people and entrepreneurial companies the freedom to live and work and set up shop in a free (and free-market) environment, like they can in any one of the 23 pro-freedom, right-to-work states in the U.S., where they can and do prosper. And we can properly counter the unions’ left-wing and extreme left-wing advocacy.  And as this video points out, we can end the special treatment unions receive from their bought-off governments.

Challenge governments to turn their backsides on those cronies; those special interests and the labor union morass. The last thing we need today is more ass.