Newsquips daily news brief— Newsquips are added to, throughout the day… much like demands from weak industries and poorly run businesses and (moreover) the liberal-left and their labor unions, for “stimulus packages” from their nanny-state government and taxpayers.  So come back often and refresh the page!  …  Free-market enterprises work in a free democracy without government intervention because citizens get to freely vote as they wish—with their dollars—every second of every day for the products and services that they like. So a special PTBC shout-out to “Don-t Want To”, from BC, who did, even if she didn’t.  Huh, you ask?  She (I know she’s a she) who constantly sends PTBC news tips AND automatic monthly cash, convinced herself to also send a stimulating PTBC life-sustaining contribution of $100 last night even though I didn’t demand any stimulus from her or her government.  Capitalism works fine.

2.    The state-owned CBC is like the marketing wing of the liberal-left, example 9,083—  Here’s a typical “hard-hitting question” from CBC Newsworld anchor to a leftist government bailout-demanding mayor of a Detroit-area town where his voters are all union auto-workers:
“Tell us, you know, HOW crucial this [government bailout] money is to the people of your city and state because it’s obviously not just the auto sector jobs, it a WHOLE BUNCH of peripheral industries as well.”
No, there is no question mark there—because it wasn’t a question— she was TELLING HIM. 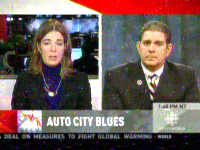 That’s some critical news analysis and digging, there, folks, and not at all kowtowing and leading.  Push that propaganda!  …  Then it was over to the live news conference from the head of the Canadian Auto Workers Union … where we quickly learned this interesting tidbit from the hothead, angry, yelling, perhaps even hateful, finger-pointing left-wing political and union boss:  Problems in the auto industry are not—even one iota—the fault of the dinosaur labor unions and their hideously rich union contracts—it’s the Republicans’ fault!  And I quote:  “There are Republicans from the south who want the auto industry to fail, on the false hope that they’ll get more jobs.  That is false! … It’s finger pointing!”   Well yeah, it’s false, alright—by which I mean the CAW boss’s preposterously stupid political analysis and ideological conclusion is false. In fact, it’s retarded.  … By the way, since when did Chapter 11 “bankruptcy” mean the complete and absolute closure and the final end of any business or indeed whole industries?  What a load of, well, crappy car parts built by rich workers.  It actually breathes new life into failing businesses. But whatever.  That’s not the leftist meme.  So I should just behave and leave it to the CBC to explain the leftist meme to Canadians.  Vote liberal. 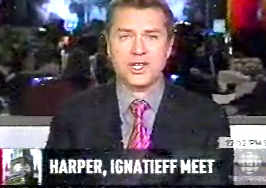 3.    CBC REVISING HISTORY AGAIN— to suck up—promote—aggrandize—LIBERALS.  Again.  Only three days ago, the state-owned liberal-left-luvin CBC broadcast an interview on its own network with Prime Minister Harper during which he said (December 9, on CBC!):  “I’m optimistic that the next leader of the opposition may want to look at different kinds of arrangements in the best interests of the country, and I can assure you that it is in the interests of the government to find a consensus, certainly among the federalist parties and certainly among the two major parties, to find things we can agree on in the short term, to do what we can to keep people working, keep us from sliding deeper into the morass that we’re seeing around the world. … For now, I think the big national parties should be willing to work together to fix the national economy, and we are more than willing to do that. … I hope the next Liberal leader will be willing to sit down with me to have that kind of discussion.”  (see my Newsquip item #7 here for Liberal MP reaction to that OLIVE BRANCH FROM PM HARPER).  In so saying, Prime Minister Harper clearly opened the lines of communication.  Therefore, biased CBC History Revision and “News” anchor Andrew Nichols informed Canadians just now, that following an Ignatieff/Harper meeting this morning, “The newly minted leader of the Liberal Party is opening the lines of communication with the Prime Minister.  Michael Ignatieff met with Stephen Harper today in Ottawa…”    Oh thank God for that wonderful Liberal Ignatieff opening the lines of communication.  Vote liberal.

CTV Newsnet anchor Jacqueline Milczarek:  “So I mean, uh, I believe it was CAW President Ken Lewenza who’s saying look, you know, our workers could work for ZERO—and it wouldn’t make a difference, it’s not about further concessions it’s about how the companies have managed themselves so far and further restructuring.  Do you agree with that view—that, you know, one should not attempt to blame the auto workers for not uh conceding more here?”

Oh what’s with the hardball questioning of the poor man?!  Cut the guy some slack!  Doesn’t this line of questioning from the CBC (further above) and CTV constitute torture according to the Geneva Conventions or the U.N.?  Stop the waterboarding!

His shocking answer to her hellacious questioning:

But how about this:  What if cars cost 16 or 18 thousand dollars instead of 26,000.  Would that help sell cars?  Nah.  That kind of radical thinking doesn’t belong on the airwaves.  It’s critical thinking!

But of course given the leading question, and free advertising and PR time, he ran with it, at length:

Brian Masse—NDP MP:  “…But also take it to the next level!  When you look at an economic stimulus package it protects Canadian families … and [if union workers give concessions] also too is you’d have the United Way and other charitable organizations uh lose money as well too so it defeats the overall purpose of a package that supposed to stabilize the economy and peoples’ lives right now! … [ad infinitum]… ”

By golly it’s for the kids …and the charities.  Hey Mr. Masse, totally O.T., how about my favorite charity, the Christian charity World Vision, or a favorite private school?  Mr. Masse?  Hey where’d that little fella run off to?

5.   Rasmussen Reports survey:  “By 2-to-1 Margin, Politicians Seen As More Corrupt Than Corporate CEO’s”.  And that’s assuming people aren’t totally brainwashed as they are here in Canada, wherein Fabian socialist governments routinely, purposefully, blur the line between governments and corporations, such that Canadians no longer know what in tarnation is what anymore.  Like their calling their state-owned media the Canadian Broadcasting “Corporation” and BC calling its state-owned insurance monopoly (with optional towing package!) the Insurance “Corporation” of BC and their state-owned lottery behemoth the Lottery “Corporation”;  such that aggrieved citizens feel compelled to proclaim (as one fella did in his lawsuit against the Lottery “Corporation”), as reported in the unquestioning and un-correcting liberal-left media, “It’s about keeping corporations honest, that’s really what it’s about.”   …  Corruption extends much further than we know, doesn’t it, liberal media?

6.   Harper’s Conservative administration and the McGuinty Ontario Liberals have joined forces to announce that they’ll jointly bail out the Canadian branch plant of the American auto industry, soon to be run by the American Congress under Democratic leaders Nancy Pelosi and Harry Reid, auto business experts.  Harper and his Conservative government somehow managed to do this without the help of —or even a “coalition” with— the extreme fringe left in Canada, the socialists of Layton’s you’ve got to be kidding party;  nor even the tacit support of any Canada-wrecking socialist/separatists like Gilles Duceppe.  I don’t know how that could have happened, since “Harper can’t be trusted”.

7.   I love how the fact that a major poll shows, yet again, that the Conservatives would win a majority if an election were held today, is cast as an “Oh yeah, the poll ALSO shows that they would win a [the word MASSIVE is missing] majority”.  Nonetheless, a new poll, currently being hidden under the desks of most of the media has been released (on Friday night!  Wow!  That’s when all media and all politicians know you release the VERY WORST NEWS so as to get the very least attention from the public.  Great planning, liberals and media!) saying that the vast majority of Canadians want Harper and the Conservatives to be the Prime Minister and lead the nation, and for Liberal leader Michael Ignatieff to figure out a way of working with the person and party Canadians elected in our last democratic election.  Oh yeah and that if an election were held today, the Conservatives would wipe the floor with the opposition and enjoy a massive majority.  But don’t tell anybody.  That wouldn’t be liberal!

Results of the poll, conducted exclusively for Canwest News Service and Global National, showed 65% of those surveyed said they believe Mr. Ignatieff should try to find a compromise with Mr. Harper, compared with 27% who said he should “stick with the Liberal-NDP coalition.” Eight per cent said they didn’t know how Mr. Ignatieff should proceed.

The only place the coalition had majority support was in Quebec, were 62% gave the idea approval. Opposition was strongest in Alberta where 80% were opposed.

Poll results also suggest Canadians are so uncomfortable at the prospect of a Liberal-NDP coalition government, backed by the Bloc, that a majority—56%—would prefer going to the polls again early in 2009 if Gov. Gen. Michaëlle Jean is forced to choose between the two options. That number is unchanged from a similar poll conducted last week, prior to Mr. Ignatieff’s promotion to the Liberal leadership.

The poll also said the Conservative party would garner 45% of the vote and score a majority victory if an election were held today.