Today the Editor-at-Large of the Financial Post, Diane Francis, wrote a good editorial summary of the rather mindless socialist hypocrisy of

NDP leader Thomas Mulcair, and in so doing found another good opportunity to mess with his name a little, as I did a couple weeks ago.

It’s what the unwashed plebeians like us do when we’re bored with our subject (in this case, champagne socialist “leaders” like the great Doctor Thomas Mulcair, whose doctoral certificate apparently licenses him to diagnose something called “Dutch Disease,” and pronounce that our nation is infected with it. In case you didn’t know, the Doctor’s antidote is socialism. Like I had to tell you.)

“Thomas Mulcair is neither appropriate nor smart. He is very Mul-cairless,” Francis wrote in her editorial. She laid out the reasons why, in a three-point calculus that even the Doctor could understand, if he weren’t so arrogant as to avert his eyes from the sharp diagnosis of a mere disagreeable citizen (or shall I say “subject?”).

1. On living in a mansion

Mulcair is the latest incarnation of what the British dubbed the “champagne socialist”. Stornaway is another symbol of inherited privilege, like the Monarchy, where status and perquisites are given away to the duly “crowned”.

Mulcair, if consistent with his ideology, should have declined the grand housing perq and diverted the excessive cost of his upkeep to some worthy cause.

He opted instead to live like Royalty even though he backed statements by fellow NDPer Pat Martin that the cost of Royal visits alone was sufficient to abolish the Crown as head of state. He also signed a petition to have The Queen’s portrait removed from the Foreign Affairs building a few months ago.

(To square the circle, the NDP leader cannot criticize the “cake” and eat it too. But he is.) …

The very fact that Mulcair, who aspires to take control of Canada and fundamentally transform it into a socialist state, is actually a French citizen  —  yes I mean he has a French passport  —  from France  —  is galling enough in and of itself; but especially so when you consider Francis’ rather British regal point #1, above. And sacré bleu, Francis, being named Francis, should have picked-up on that bon mot.

But Mulcair’s crass, careless hypocrisy doesn’t stop there, of course.

My own article on Thomas Mulcair (actually, he apparently calls himself “Tom” now, which may be to avoid the formal-sounding trappings of anything “elite,” or “royal,” or not a part of that NDP claptrap class-division term “working family,” even while he apparently considers himself above all that) could have provided her with one more point. But anyway, the main point is that I beat Francis to the Cair/don’t care punch, see. I wrote it up two weeks ago, and made this cool “Don’tcare” graphic, providing you, the consumer, with added value at no real cost to you (which I mention because I thought Francis might care, given her position at the Financial Post, the FP being all financial and what not): 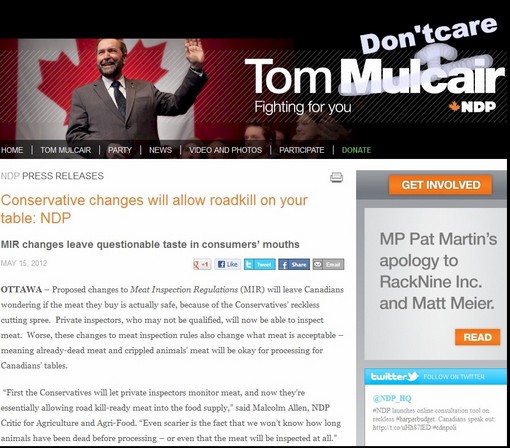 But anyway, if Diane Francis can call herself Editor-at-Large of Financial Post, and Thomas Mulcair is “Leader of Her Majesty’s Loyal Opposition,” I have decided to raise my stature in life too, arbitrarily, and henceforth bestow upon myself the title of Leader and Editor-at-Large of ProudToBeCanadian.ca. If the readers don’t like it, let them eat cake.

Can’t make this up: tax ‘n spend NDP MPs caught not paying their own FAIR SHARE of taxes. 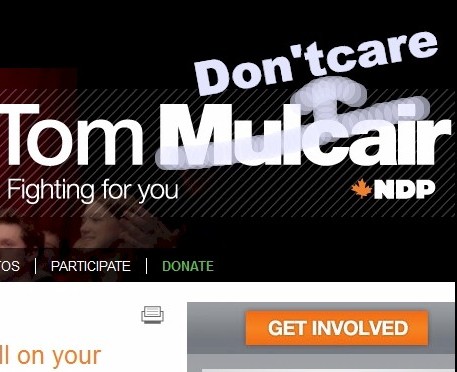