And behind closet door number two we have an enviro-baddie SUV!

First I brought you this picture set:

This is a Subaru Forester SUV.  It’s what the Leader of the Liberal Party, Stéphane (“Mr. Green”—or more appropriately, “Monsieur Vert”) Dion, who is also the former environment minister and a key preacher of the man-made global warming industry and Kyoto Godless cult religion—drives.  He even named his dog “Kyoto”.  No merde!  (Of course as we know, “Kyoto” spelled backwards is “Otoyk”!)

I looked at it a bit.  It gets roughly 22 miles per gallon.  That’s a new one of course—his is at least five years old, so it get worse mileage than that.

A Toyota Prius gets 52 miles per gallon or roughly twice the mileage that Monsieur Vert’s Subaru gets.

So that’s a fun fact if you’re not a liberal-leftist hoping for a Liberal victory in the next election.

I understand Monsieur Vert’s wife, who is known as Janine Krieber, is a little embarrassed about that now that they’re being pulled out of the closet and into the limelight (which doesn’t even use an energy efficient LED bulb!).  She and her grand greenie weenie were both fawned over in the Montreal Gazette (Canwest) this weekend:

For 2007, she and her husband also plan a change in their personal life: getting a less-polluting car. For the last five years they’ve driven a Subaru Forester SUV. Their next will be a diesel model or a hybrid, Krieber said.

Actually if they win the election, their transpo will be a ha-YUGE gas-guzzling armoured Chevrolet Tahoe SUV surrounded by about eight others that each get about one mile per gallon.  Maybe they could borrow former Liberal Bush-and-conservative-and-America-hater Carolyn Parrish’s “Smart car”, since her Mississauga municipal election campaign is over now! 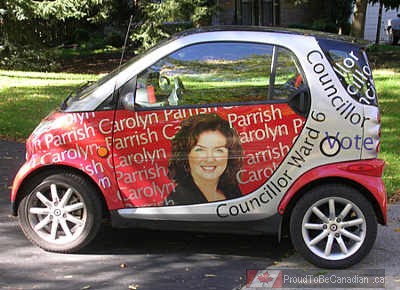 …“Stéphane and I are always like that – we go the farthest we can,” she said between drags on her Player’s Light cigarette….

You might want to not push so hard on the levers of credibility and hypocrisy, Mr. Dion and Mizzzz Krieber.  Puff puff.

EXTRA:
Hey I wonder if THIS detail had anything to do with his buying a Subaru!