Anybody who knows business and has a clue about our current economic situation would agree:  the financial crisis we’re in has deep roots within a banking and credit crisis.  So when as of today we’ve heard from most Canadian banks and they all report that they’re doing OK or better than OK—all making profits—that would definitely be the news of the day—or maybe even the most important news of the past few months.

But not on the CBC.  They’re still digging up whatever doom ‘n gloom, recession-promoting, economic trash-talking, and FEAR MONGERING dregs they can find, making the profitable banking news second or third or even no rate news.  These “RECESSION WOES”-style banners are just some of the banners I’ve seen on Newsworld this morning, and I’ve only been at my computer for less than an hour. 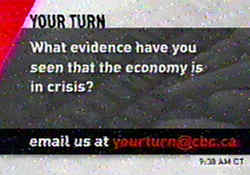 CBC pop reporter Nil Köksil (is she an unpaid intern?) even did a whole segment on how horribly the recession was affecting folks—including reading a choice email from a woman—a single mother—who says that as a result of this recession she will have to move into a shelter and simply hand all her children over to one government agency or another in order to survive, adding this hideously bullcrap statement:  “there is no help out there for anyone.”  Taxpayers who don’t think of Canada as a nanny-state communist country might beg to differ.

And then she hilariously (well only if only it weren’t so deadly serious) conceded that some people have written in saying they’re tired of the CBC’s horrible doom ‘n gloom news, and that they have lots of positive good news economic stories to tell, and then she said that she welcomes those stories too, into her CBC Inbox.  Right.  Welcomes them.  I guess it’s just that they never make it to the CBC “Outbox”, and rather, it seems, they get deposited directly to the CBC Junk Mail and Delete boxes.

Then it was on to a story about the fashion industry being in recession.

UPDATE: throughout this morning, up to the state-owned, socialism-reliant CBC’s 8:05 AM PT oxymoronic (emphasis on “moronic”) “YOUR BUSINESS” segment, which is the worst business news segment on any media, there was no mention at all whatsoever of the profitable Canadian banks, which as I said is absolutely the most important news of the past long while—not just business news, but general Canadian news.

Canada’s banks emerged from a turbulent start to the year with slow but relatively steady earnings despite an increase in bad loans and investment losses.

Scotiabank and BMO, Canada’s third- and fourth-largest banks respectively, on Tuesday both reported profits slightly ahead of forecasts as income fell less than expected in the first quarter.

The performance means all of Canada’s top five banks were able to produce positive results despite extreme market volatility which has seen stock indices plunge to fresh lows this week. …

UPDATE 2:  They did get around to reporting it at 8:30 AM PT, but as just another story, and surrounded by bad news stories on both sides.  Bu hey:  thanks for reading my blog, CBC.

Try to keep up:

• TAKING BETS Part VI:  Will CBC report it? Pension fund to invest half a billion in energy projects

• TAKING BETS Part II:  Will CBC report it? McDonald’s sales up 7% in January, along with Wal-Mart

• TAKING BETS Part I: Will CBC report this?—Wal-Mart sales up—even ahead of their own expectations