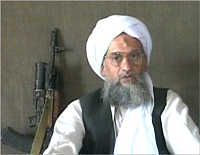 Al-Qaeda’s second-in-command, Ayman al-Zawahri, today raised the level of “civilized debate” by calling President Bush an “alcoholic and lying gambler”, in a 45-minute lecture to, well, the world, I guess.

President Bush, not wanting to sink down to his level, reportedly simply called him “a big fat poopoo-head”.  And then he carried on with his day protecting the civilized world like a sane and civilized adult.

For his part, I understand from “sources” that General Jack Layton, genius Canadian socialist pacifist war expert (in the French cheese-eating surrender-monkey mold) and his you’ve got to be kidding party minions, fully agreed with al-Zawahri, and continue to insist that the likes of Iran’s Mahmoud Ahmadinejad, Hezbollah’s Sayyed Hassan Nasrallah, and sundry Islamofacist terrorists are still worthy of sitting down for a good chin wag over tea and buns.  He continues to believe in legalizing pot smoking too, naturally.

Previous articleCanada’s fabulous contribution to dictatorships
Next articleThought for the day, February 13 2007