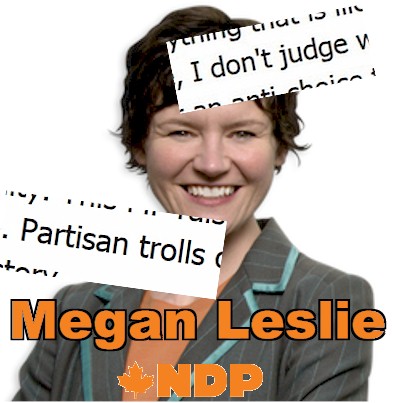 You know how they say it’s the coverup, rather than the crime, that get politicians into trouble? Here’s a twist on that.

NDP MP Megan Leslie allowed her official NDP web page’s events calendar to be used for a promotion for a 9/11 truther event. If you can stomach it, cast aside the repugnance of the 9/11 truther conspiracy idiocy, and even the fact that a sitting MP would allow that kind of promotion on her official NDP web site. And even try to tolerate the fact that she has decided to keep that promotion in place, even after she’s been made aware of it. Try to forget all the 9/11 victims and their families, and all the soldiers who fought terrorists in Afghanistan and were killed or maimed (and to that last point, I still wear red on Fridays). 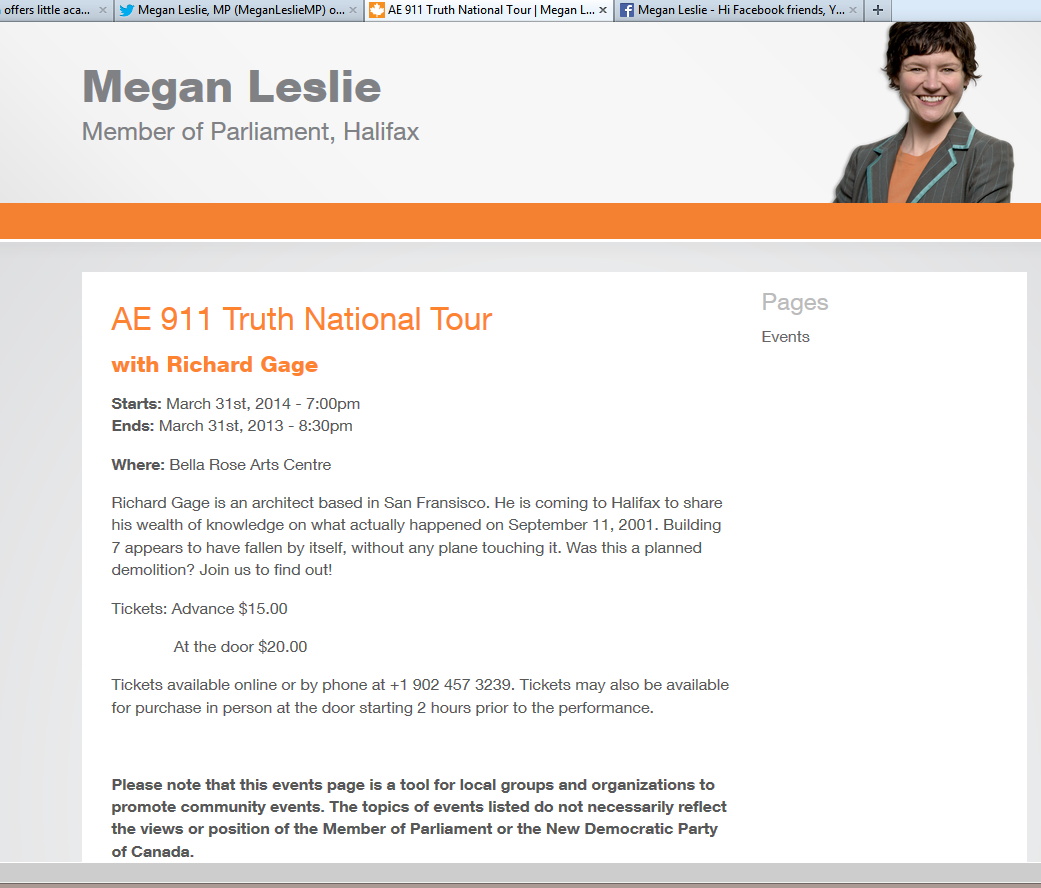 In this case, it’s not the crime  —  I don’t have a clue if Megan Leslie is a 9/11 truther or not  —  nor her making the patently stupid mistake of allowing 9/11 truthers to promote that disgracefully insulting and insensitive nonsense on her official NDP web site; and then leaving it there seemingly to prove her arrogance and stupidity.  It’s her response that irks me.

Here’s a Canadian NDP MP’s defense of herself after allowing her taxpayer-subsidized NDP web site’s events calendar be used to drum-up support for a 9/11 truther event, and being called on it (with my highlighting): 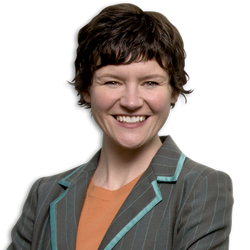 Yesterday I got attacked by a Conservative MP for my events calendar on my website. If you’ve seen it, you’ll know that it is full of all kinds of events from the community. This MP raised the fact that there is a 9/11 Truther event on the site. Partisan trolls on Twitter got all excited, and all of a sudden, it was a story.

I keep this aspect of my site as a service to the community. I’m proud of how many people use it, and the way it supports our community. I won’t post anything that is illegal, and I won’t post events about hate, but otherwise, I don’t judge what goes up. If there were a climate denier rally or an anti-choice talk, I would post them. I have a process for dealing with complaints from the community. There is also a disclaimer on the site saying they events may not reflect my views or the views of the NDP.

What do you think? Where is the line? I’ve been accused of showing poor judgement, and damaging my good name by associating with groups like this. But I don’t just represent people I agree with. Would you judge the posts? Would you not post at all? I’d be interested in hearing what you would do.

First, if you are concerned by this and call her on it, you’re “attacking” her and you are a “partisan troll.” But you gotta love how Megan Leslie, MP, puts “climate deniers” and “anti-choice” people (using purposely derogatory terms) in with the same lot as

9/11 truthers. She will now also put me in the “attacker” camp along with the other “trolls,” as she calls people who criticize her, in addition to the “climate denier” camp, and the “anti-choice” slot.

She has quite the mentality for a Member of Parliament. People who don’t agree with her free abortion stance, and her “man-made global

warming” theories, are cast as the ills of society akin to the disgraceful 9/11 truthers, and marked by her with her derogatory, bromidic labels. Yet she “represents” you and all, she says.

You and all definitely pay her salary. This is a Canadian MP calling other Canadians who pay her exorbitant $160,200.00++ salary, “trolls,” and who attempts to reduce earnest ideological opponents into tendentious categories of supposed shame: “climate deniers,” and “anti-choice.”

She makes the passive-aggressive claim that in order to be absolutely fair, and balanced, and open, and “I don’t judge,” she allows event postings by radicals like 9/11 truthers  —  because she also represents people she doesn’t agree with.  Like “deniers” and those “anti-choice” dictators, I presume.

This is all emblematic of the inconsistent application of principles, and the peculiar hypocritical style of “tolerance” that is the left and far-left, particularly the far-left NDP.

She as an MP thinks a 9/11 truther event is a “service to the community?” Apparently she’s utterly tone-deaf and incapable of perspective. Or she really advocates it. I cannot begin to explain how someone who pretends to be full of compassion has absolutely no comprehension of how insulting and disrespectful that kind of thing is, to so many people, particularly those involved  —  which include many Canadians. And there is no rationalizing how she thinks it is appropriate to lump those 9/11 truthers in with good, honest people who have studied the climate science and simply don’t agree with the failing theories of “man-made global warming;” and lump those 9/11 nutters in with those who are simply pro-life and against free, limitless abortions.

Previous article
Since when does a mortgage rate war “loom,” or concern government?
Next article
Grand display of decorum and respect: Liberal Justin Trudeau drops F-bomb at cancer charity event.