Just when the Canadian Liberal leadership circus was getting exciting with a lady named Fry leaving the race, the notably uncooked sushi is on the outs for the libbers.  It’s back to granola and beans.  At least Liberal Party-appointed state-run CBC executives will be happy for the increase in ease of defecating on Canada what with the higher fiber diet. 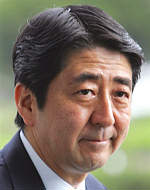 Japan, already a full U.S. ally in the war on terror (at the request of the U.S., they sent troops to Iraq to join the U.S., which was nonetheless acting totally “unilaterally” according to the liberal media), has elected a new, more conservative Prime Minister who campaigned on a promise to align Japan more closely with the United States (liberals, sorry but yes the U.S. is “American-style”), and to take a less pacifist, more aggressive stand in dealing with other global hotspots such as North Korea (liberals, that’s “sane”).

The liberals’ New York Times begins its coverage with this lament: