Here’s one of today’s “news” articles for examination:

…But for Arthur Schafer, director of the Centre for Professional and Applied Ethics at the University of Manitoba, the story of frugality among Conservative cabinet ministers is more about absent receipts than missed deadlines.

(Here’s part of Professor Schafer’s bio:  “Schafer has been a frequent guest on CBC—radio and television, including many appearances on CBC-radio’s Morningside and This Morning, As it Happens, Sunday Morning, and Cross Country Check Up; and CBC television The National, The Journal, The National Magazine, and Newsworld…”)

When a minister’s lone hospitality claim over three months is a $16.99 grocery bill for a party to celebrate the work of 15 ministerial staff, or $44.31 for “refreshments” for 14 people, the public has every right to be skeptical, according to Schafer.

“We have a government that was elected partly, perhaps in large measure, on a platform of integrity in government and openness and disclosure,” Schafer said in an interview.

“But in practice, not just with respect to expense accounts but in all sorts of ways, it appears to be earning the label ‘control freaks’ and ‘non-disclosure experts.’ ”

[…] What has raised Schafer’s ire are publicly posted accounts – called Proactive Disclosures and created in 2004 by the scandal-plagued Liberals – that show a number of Tory ministers claimed no hospitality expenses whatsoever in the most recent three-month reporting period.

[…] Schafer likens the most frugal reports to doctored scientific results.

“In the real world you could never get your data to be so perfectly in accord with your hypothesis (of Tory penny-pinching),” said the professor.

Of course buried within all the agitprop which they try to pass off as a legitimate “news” story are explanations—more of which could easily have been secured had they desired that—and which apparently neither the “news” article author (Bruce Cheadle, Canadian Press) nor their little “informant” genius liberal-left Professor Agitprop believes, and which they point to only to serve as another launching pad for liberal-left spin on it, such as:

Several Conservative ministers, when asked about their absent hospitality, say they simply pay for working breakfasts, lunches and dinners out of their own pocket.

Fisheries Minister Loyola Hearn is among a handful who had zero hospitality claims in the last quarter.

“Any time I’ve taken anybody out for lunch I pay the bill,” said Hearn – before adding with a grin, “or they pay the bill.”

Then that’s followed-up by the liberal response of course, because liberals MUST have the last word on everything, always…

“If the person paying is someone from the private sector who is seeking favours, then we’re approaching issues of corruption or conflict of interest,” he said. 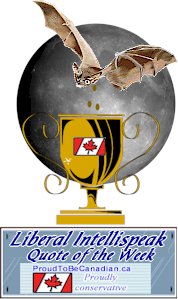 With that, Professor Idiot instantly wins our not-coveted ProudToBeCanadian Liberal Intellispeak of the Week Award (an award offered to liberals who feign intelligence, but are actually total moonbats).

Yes sir he’s got to be right.  Liberals never bought anyone off with Liberal government cash, not via brown paper bags or laundering taxpayer cash through all manner of liberal-left business ties or nuttin’.  Only when taxpayers themselves offer to pay —or the cabinet minister himself —or there are no payoffs—are “red flags” raised by liberals.

Here’s some applied ethics for you, Professor Misinformation and your liberal media amplifier:

When you don’t have the foggiest clue what you’re talking about, and you obviously suffer from a severe anti-conservative government hate-on disease and paranoia or mistrust of anything not overtly liberal-leftist, how about simply not insinuating that there’s “red flags” and that the Conservatives are ripping Canadians off and “hiding” things and are involved in covert nefarious activities such as allowing themselves to be “bought” by folks who pick up the tab for the Nuffy’s Donut rather than the taxpayer paying for it.

How about that for ethics?  How’s that for science, Professor Libby?

How about basing your statements on knowledge and on facts rather than on nothing—nothing —but clearly biased pure guesswork, or hopeful thinking, and pure nonsense conjecture, or outright misleading and hokum?  I know it’s a radical approach, but conservatives have relied on it effectively for years!  (I do realize your precious “Centre for Professional and Applied Ethics” at the University of Manitoba won’t covet that principle with you in charge, but one can hope for changes in the future).

What a sad but very revealing commentary this little story is.  Another story of abject liberal-left media bias and their perfidy, and the bonus of my ability to expose another state-funded academic as being nothing short of a shill for —a division of—the liberal-left and its liberal-left world view and ambitions for Canada.

“That doesn’t appear to be what’s going on here.”

Two weeks ago, Liberal MP Pat Martin complained that the Auditor General wanted to audit expense claims of MPs.  “No!” he said.  Another Liberal agreed.  “Bad idea!”  That didn’t raise any flags.

EXTRA:
In the liberal Vancouver Sun’s (Canwest Global) rendition of this story, they abreviated it, making it look even more bad for the Conservatives.  They edited out all of the remarks from Loyola Hearn in which he explained that he and others simply pay for things themselves or their guests pay.