Not all imitation is created equal.  Of course socialists aren’t interested in equal opportunity as much as equal outcome, so maybe they can adjust this thing like Obama is trying to do in America.  Yes we can.

Iranian nutbar extremist Mahmoud Ahmadinejad’s latest re-election campaign video material uses the Farsi phrase Ma Mitavanim (We Can) on a blackboard as a backdrop.  Cute.  I wonder if Oprah will sign on.  And will we get to see him shirtless walking out of the breakers in Hawaii?  Fingers crossed!

Meanwhile, the socialist/communist nutbar dictator way down south in Venezuela, Hugo Chavez, has explained to his people that Barack Obama is following his lead and taking America down the yummy Venezuelan-style socialist path.

Beauty. I imagine Jack Layton’s head must be on fire as he claims to have led the way.

(CNSNews.com) – Inspired by his meeting with U.S. President Barack Obama at the Americas Summit, Venezuelan President Hugo Chavez declared on Sunday that Venezuelan socialism has begun to reach the United States under the Obama administration.

“I am coming back from Trinidad and Tobago, from the Americas Summit where, without a doubt, the position that Venezuela and its government has always defended, especially starting 10 years ago, of resistance, dignity, sovereignty and independence has obtained in Port of Spain, one of the biggest victories of our history,” Chavez said.

“It would seem that the changes that started in Venezuela in the last decade of the 20th century have begun to reach North America,” he added.

Chavez made the comments Sunday to a crowd gathered for the 199th Commemoration of the Independence Declaration of Venezuela.

“Bolivarian socialism” is the term Chavez uses to refer to his 21st century Latin American form of socialism, which he claims originates from the revolution launched by Simon Bolivar, a Venezuelan and Latin American revolutionary leader of the 19th century.

“We have assumed the commitment to direct the Bolivarian Revolution towards socialism and to contribute to the socialist path, with a new socialism; a socialism of the 21st century which is based in solidarity, in fraternity, in love, in justice, in liberty and in equality,” Chavez said in a speech in mid-2006, according to the Venezuelan government’s official Web site.  … 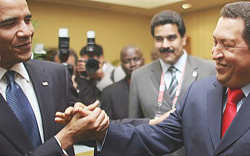