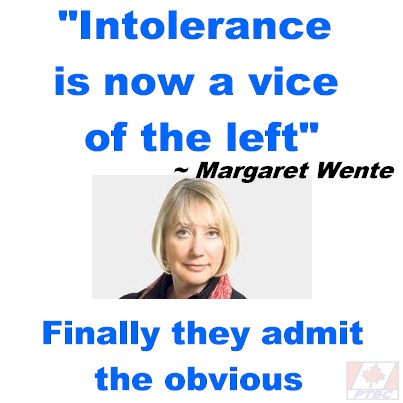 When it comes to catching up with the reality on the ground, and admitting their perfidy, it takes the liberal media approximately eight years to catch up. But let’s give credit where it’s due.

Margaret Wente, the Globe and Mail’s putative “conservative” columnist, writes up one that is sure to get her petitioned, rebuked, trolled, and possibly banished for life from the liberal-left’s cocktail circuit, and certainly added to the the gay industry’s hit list.  And for that, we applaud her.

Intolerance is now a vice of the left

What poses a bigger threat to Canada: A small Christian university that endorses traditional ideas about marriage? Or a large group of liberal activists who want to stomp all over them?

That’s easy. It’s the Christians. Progressive people across the land have been waging war against Trinity Western University and its plan to start a law school. Now that the school has been approved in B.C., they want to make sure the graduates are shunned, ostracized and never allowed to practise law anywhere in Canada.

They lost a big one last week, when the B.C. Law Society reluctantly voted to recognize the law school and its graduates. The West Coast Women’s Legal Education Action Fund expressed its disappointment, saying that “TWU’s discriminatory policy effectively excludes LGBTQ students from access to the benefits of a legal education at the university.”

Well, not really. The problem is the university’s conservative views on sex, which apply to everyone. It asks all students to sign a pledge saying they won’t have sex outside of marriage. And Christian tradition doesn’t recognize gay marriage. That’s it – it’s a conduct issue, not an issue of belief or identity. It doesn’t mean gay students aren’t welcome. Yet this simple request has been blown up into a case of monstrous discrimination against gay students. Never mind that if they don’t like the rules, there are umpteen other law schools they can apply to.