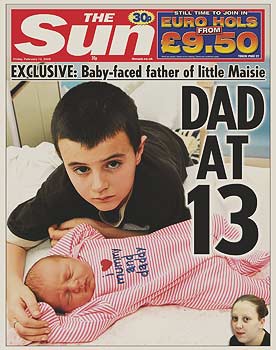 I’m pretty sure the boy and the girl haven’t quite decided what their politics are, yet, but I can assure you that they are the product of liberal-left, secular progressive thinking, policies, social engineering, government funding, schooling, mandates, brainwashing, and propaganda.

Turns out those “how to have sex” and “how put a condom on” classes (complete with free maps to the local abortion mill) that they teach in schools now haven’t quite gelled yet.  And while the little girl was on the pill at the ripe old age of 14, she forget to take them.

Baby-faced boy who became father at 13 ‘was allowed to share bed with girlfriend, 14’

…Former Tory leader Iain Duncan Smith, who runs the Centre for Social Justice think tank, said: ‘I don’t know about these particular families, but too many dysfunctional families in Britain today have children growing up where anything goes.

‘It’s utterly tragic. It exemplifies the point we have been making about broken Britain.

‘It’s not being accusative, it’s about pointing out the complete collapse in some parts of society of any sense of what’s right and wrong.

‘There is no opprobrium any more about behaviour and quite often children witness behaviour that’s aggressive, violent, rude and sexual.

‘It’s as if no one is saying this is wrong.’