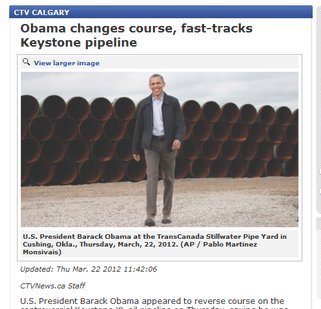 In case you’ve been away for the past four years, let me fill you in: most of the Canadian lamestream Obamamania media is still backing their man. Nothing’s changed their blinkered outlook. Not even Obama’s failed record and his increasingly obvious promise of an American ruination. It’s just getting funnier now.

The President took to the stage today in Oklahoma, where he mendaciously spoke in favor of “the Keystone Pipeline”  —  err… the bottom quarter of it  —  and promised to, well, git ‘er done, to use a decidedly southern conservative tone, which Obama adopts whenever he’s in the south. And he did it as if he had anything to do with that portion of it.

Of course being the brilliant Harvard-trained great speaker of all get out™ liberal media, he didn’t actually say “git ‘er done,” he actually said “The southern leg of (Keystone XL), we are going to make that a priority and go ahead and get that done.”

That portion requires no federal approval. And “get[ting] that done” is already well underway. Thanks anyway, Mr. President.

He says he’s instructing his regime to “fast-track” that portion through all the massive bureaucracy, and all those nasty regulatory hurdles, and that government “red tape” (his words!).

For those of you playing the home game, yes, that’s the same massive bureaucracy and nasty regulatory hurdles and government “red tape” which he and his regime adore, and grow, and build upon, every single day.

And which is, in itself, shining testimony to the economy-slowing idiocy of big progressive governments and the regulatory hurdles they’ve set up. Naturally no media picked up on that shiny gem either. But don’t worry, I’m not calling them “sluts.”

Obama still hasn’t reversed his first massive error in judgement on this file, wherein he rejected the Keystone Pipeline writ large, earlier this year, in a pure ideological and power-seeking political play to his far-left base of enviro-nitwits.  That’s the only part which requires federal approval  —  the part from Canada   —  the one key component of the whole Keystone project.

So he takes to the stage and pretends as if he’s now giving approval to something which is already approved, and vows to somehow get through all that government red tape, which he grows exponentially all day long to prevent things like pipelines and refineries from ever being built.

And the media lap it up like the useful idiots they are.

The lamestream media (in both countries) took that stump speech (apparently totally oblivious to the specter of the enormous stacks of oil pipes behind him, ready to be laid) as a jumping off point, and leaped right into the great abyss of lies with their man Obama.  Take a look at liberalvision CTV’s headline at above-right: “Obama changes course, fast-tracks Keystone pipeline.”

The Globe and Mail did the same, tweeting this as soon as they could:

That’s a load of crap.

He’s reversed nothing, and has not fast-tracked the “Keystone pipeline.” The accompanying story written-up at CTV.ca  is equally appalling and galling in its blatant promotion of the Obama lie.

Other greasy lamestream media used a similar Obama ass-kiss tactic. The state-owned CBC (for whom Obama must surely be too right-wing, but he’s the best they’ve got down there in ugly gun-‘n-God-land), also seem oblivious to the mass of ready-to-bury oil pipes Obama was posing in front of, and goes with the Obama-speak effort to obfuscate the fact that Obama was only touting the extreme southern portion of the pipeline (for which he has no control anyway), and not the larger “Keystone” project as a whole, thereby misleading readers:

Exceptions? Sun News alone mocked the Obama effort to deceive voters with their reporting today, and included this quote-adorned chiron in their far more full, truthful, and therefore fair-to-viewers coverage, which was properly critical of Obama’s abject mendacity:

Here’s a snippet of Sun News’ reporting on the farce that was:

WASHINGTON, D.C. — Using stacks of pipe as a backdrop, President Barack Obama told an Oklahoma audience that he is fast-tracking part of the controversial Keystone XL pipeline.

But the southern section he is touting — from Cushing, OK, to Houston refineries — does not need his approval and is scheduled to begin construction anyway this June. …