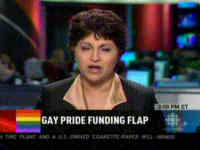 The CBC, as I’ve said before, is one of the most hateful and divisive web sites in all of North America—at least insofar as mainstream non-Nazi and non-al-Qaeda-type web sites.  It’s constantly filled with anti-Christian rhetoric and hate-speech of all sorts from its fanatic commenters who rush to spread their hate in comments to CBC “news” stories, mostly of the hate everything remotely conservative variety.  This, I imagine, is the CBC’s idea of bringing Canadians together and uniting us all, in ways that only the U.S.-based Daily Kos could (and they’re privately-owned, so that won’t do … although they use their writers).

Today, one CBC commenter seemed to clearly compare Prime Minister Harper and the Conservatives to Hitler and the Nazis.  It was approved by the CBC moderator.

LostProgressive wrote: “…Simply accept that straight white evangelical anglophone men from Alberta are the master race and we only deserve what they give us…”

There is almost no other context in which we speak of “the master race” other than in the context of Hitler and Nazis, so the comparison is

rather clear and direct, as I — a sober Canadian who isn’t high on pot — see it.  The abject bigotry and unhinged hateful rhetoric of the CBC commenter is only further disgraced by his reference to what he (clearly negatively) dubs as the “evangelical” Prime Minister, betraying a bit of hate and bile toward Christians too.  And for his trouble, the other CBC fans gave it a whole mitt-full of “thumbs up”.  But the typical CBC fans’ anti-Christian bile doesn’t stop here.  (See below.)

It’s a very carefully-chosen story by the socialism-reliant, left-wing, politically-correct-obsessed CBC story regarding the decision by the government of Prime Minister Harper to not fund, with your taxpayer dollars, yet another “gay pride” parade in Montreal (this one isn’t even the “official” gay pride parade — that one takes place in two weeks — this is yet another one —in yet another Canadian city —well, Montreal, in The Nation Of Quebec). 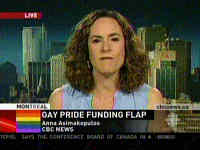 It doesn’t bother to report the “news” of any other of the many dozens or perhaps hundreds of applications for funding that were turned down by the government.  Just this one.  Why do you suppose that would be?  Are they trying to drive a wedge again?  Trying to divide Canadians again?  Trying to drum up the totally predictable hate speech against Harper and Conservatives and small-c conservatives and Christians…. again?  Here’s a hint:  Yes.  Yes they are.  It’s because this is a GAY THING.  That is the only reason they brought it up.  Because it’s GAY.  And the agenda-driving CBC is using one of their favorite special interest groups, once again, to try to bully the government into funding one of their premier left-wing causes (besides themselves), and to help rally the troops against conservatives and Conservatives.

One of the extremely rare islands of sanity on that CBC.ca hate site, a person named RoryTarant wrote:  “This article fails to mention the other thousands of organizations that didn’t receive funding either…really CBC…you should be trying to unite the country not divide it. Don’t highlight one organization and make it out to be a big political debate.”

As if on cue —no hang on a second, let me start that again.  Exactly on cue, the sheeple and useful idiots at the CBC—the CBC fans—naturally rushed to work their magic at the CBC.ca hate site of divisiveness, first with the anti-Christian hate speech.  (Spelling and punctuation are not skills well-learned by any CBC fans, who were clearly educated in public state-owned, state-run schools —I mean besides the CBC school.  I didn’t mis-type any of this):

•  cookiecrumble wrote: “…I would’nt expect anything else from steve and his born again hypocrites…”.  I gather from this that “born again” is something Christian, and bad.  This one hates Christians, and wants to spread that hate publicly on the hate-filled state-owned media web site.  And by golly I must be a genius because the CBC moderator missed that.  APPROVED by the CBC.  (And ever notice how the brilliant Harper haters all call the Prime Minister of Canada something as irreverent as possible to them, like “steve”, or “stevie”, or “Harpo”, or “Christian”?)

•  Somebody by the name “david ben mark” (yes of course, no capital letters) wrote, in part, ”…This decision is clearly biased and stinks of his right wing religious fundamentalist leanings and the homophobic nonsense generated by those beliefs…”.  I’m so sorry, but is this the state-funded anti-Christian HATE SITE?  Why yes it is.  APPROVED by the CBC.

•  LiamSmyth wrote that the Harper Conservatives are “fundamentalists”, which I take as barely disguised anti-Christian hate speech.  APPROVED by the CBC.

•  Thanatos wrote: “First thing you have to realize, is Harpo and his band of religious fanatics, hate gay people. Second, they hate the French Canadians.”  This I take to be a multiple case of pure bigotry, hypocrisy, hate, and psychological projection.  A rather amazing phenomenon unique to the CBC.ca hate site and its fans.  APPROVED by the CBC.

•  v0ci3cau3a wrote: “Welcome to the theocracy folks.”  I again take this to be barely disguised anti-Christian hate speech, as well as pure BS and particularly mindless left-wing rhetoric.  APPROVED by the CBC.

•  santa_maria wrote:  “Ah, the conservative religionists come home to roost on their unadmitted policy, at last…”.  See above.

•  justinmathieu wrote: ”…I cant imagine anything worse for ultra right wing religious nut jobs from out West then tax dollars going to a French gay event….”.  Wow.  “ultra right wing”, huh?  Possibly to an ultra left-wing Marxist useful idiot and CBC fan.  And then of course the anti-Christian HATE SPEECH in the form of “religious nut jobs”.  Nice!  Unifying!  Tolerant!  APPROVED by the CBC.

•  Montag451 wrote: ”…Remerber the CPC is heavily backed by the Utah Mormons & the US Chiristian Right who want the Tories to destroy gay marriage and equal protection of gays under the law.”  Oh dear.  The “Utah Mormons”, no less.  “Destroy”.  “Heavily”.

•  kipwilson wrote:  ”…The Harper Conservatives are mostly western separatist evangelical extremists. They are anti-gay and anti-Francophone….”.  Well shit they’re everything bad, then, huh?

The anti-Christian bile goes on and on, on the state-owned CBC.ca hate site.  There’s tons of “homophobia” pronouncements as well, in which the left-wing “tolerant” set seeks to explain to us that all conservatives and all people who don’t perfectly appease the gays and their lifestyles and their wants and wishes and their funding “requests” and gay marriage and who don’t go to gay pride parades are, alas, “homophobes”.

•  Simon Shaw called the Harper Conservatives “a group of highly homophobic individuals”.  A “group of”, huh?  That’d be bigotry, pure bigotry.  Nice work missing that, CBC!  And note that it’s not simply “homophobic”, it’s “highly homophobic”.  See, the standard level of “homophobia” is so overplayed now, so they have to up it to “highly homophobic”.  Soon it will be “extreme” homophobia to miss a gay pride parade and not happily donate your hard-warned cash for their lewd sexual displays on our city streets.

•  suth_2468 wrote: ”…I can’t wait for the day when Harper is gone and this biggots and homophobes will stop being validated.”  Irony!  Too bad the writer doesn’t know it.

•  EspoZito wrote:  “The homophobes and rednecks are working hard today!”.  This is a judgment only on the work habits of some particular folks.  So don’t worry.

One guy is an overt racist, and an overt sexist, but CBC liked his comment anyway:  joeyjojo wrote: ”…I look forward to the day when a woman or ethnic person runs for PM.”  APPROVED by the CBC.  The fans loved it, giving it 490+ “thumbs up”.  It’s as if they all watch the CBC all day long, and therefore have learned to hate white males.

Then it’s back to plain old CBC-style hate speech against Prime Minister Harper and conservatives, which is de rigueur for leftists at the CBC:

•  Kimberleytg wrote: ”…To shun these events can only be seen as blatant discrimination. …So, to those who support this blatantly dsicriminatory action, please put bandaids on your bleeding knuckles…”, thereby comparing conservatives to Neanderthals or apes, which is what the truly mindless left-wing folk do.

And of course the usual useful idiot’s pitch for socialism:

•  LPinMtl wrote (sounding like a socialist and a truly progressive new age sycophant and the perfect CBC fan): ”…it’s the government’s job to fund cultural events that promote Canadian culture…”

Previous articleBashing Christians, conservatives, Americans: perfectly acceptable at CBC.ca; Gays? Can’t risk it.
Next articleTake Two Aspirin And Call Me When Your Cancer is Stage 4