The state-owned CBC’s usual radical leftists, including the phalanx of the Sarah Palin-haters, then immediately jumped out from under their craggy rocks (or from their mom’s basement) and began, as if reflexively, mindlessly, to bash the crap out of her (as best they could —poorly and entirely illogically and without a shred of intellectual acuity)  — on the state-owned web site.  Anonymously of course, because they’re complete cowards.

This first one oddly tries to conflate Palin’s membership in the NRA, and occasionally advocating to protect America’s Second Amendment rights among others (as the shot Congresswoman Giffords herself did as a gun owner and NRA member), to her inciting hatred and violence.  That is, in and of itself, twisted, extremist, BS.  But it’s the CBC so we have to allow for that.  Imagine:  being “the poster girl for the NRA” makes her one who “incites hatred and violence”?  Only to a screwed-up mind.  He then drops Ann Coulter’s name into the ring as if that helps bolster his case.  Throw them all to the lions, for we disagree with them!

Anybody else find it incredibly ironic that Palin has counselled against comments “that incite hatred and violence”?

Is she not the poster girl for the NRA? Has she not made a name for herself with hateful rhetoric?

The only thing that could be more ironic would be if Ann Coulter had made these comments.

This next one seems to have been written in that weird vacuum of typical left-wing, Media Matters/CBC-style lack of information (willful or otherwise).  He condemns her, and her alone, for (and make no mistake — causing) the murderous rampage of a deranged individual by her merely putting an election campaign map on her web site targeting Democratic districts with crosshairs.  He ignores not only the facts, but what Palin herself said in the video —that both sides did this, and do it today, and have always done it (and they should continue to do it)  — and moreover, he ignores the fact that the CBC itself does it too, as I’ve pointed out (CBC’s politics show has a daily feature called “The Firing Line” in which crosshairs are displayed, and in which the whole idea is to put the Conservative government — sometimes just one individual — in the crosshairs.  No matter:  135 agreed with that comment and only 10 didn’t.

Palin’s choice of crosshairs to mark the districts is just incredibly stupid and tasteless…exactly what I have come to expect from her.
Shame on you Sarah, for contributing to an already volatile climate..

This next one passes as brilliant intellectual thought for a CBC commenter — or actually for most progressives today.  Could it be more intellectually vacuous?  And with great respect (no, with none, actually) to the first commenter I posted above, can you then spot the true irony?  Yet look at the Agree/Disagree numbers!  Ten times the number of CBC fans “Agree”.  Yes, the CBC sure has bred a Canadian culture rich with compassion, tolerance, intellect….  Let’s keep this thing alive!

Why does she open her mouth?

What an idiot this woman is.

As if to double-down on the intellect and tolerance (etc) arguments I made above (and again, look at the Agree/Disagree numbers):

Palin should be implicated for inciting violence. Her comments attract the “red-neck” right wingers and gun lovers.

This idiot draws the direct line to Sarah Palin as the one to blame for the murderous rampage.  She calls it a “FACT” — all in capital letters, as if to make the point that it’s not merely conjecture or opinion.  And yet the CBC “moderators” allowed it to be posted.  It’s clearly libelous.

The Congresswoman commented on it, in terms that revealed she was afraid it would provoke acts against her

Then she was shot.

That alone makes it good journalism to discuss whether Palin and her revolutionary rhetoric provoked this act.
[…]

This next one demonstrates more of that idiot meme that has been cultivated by the state-owned, socialism-reliant CBC, and all the other left-wing, and even moderately liberal media.  This one not only vacuously deems Sarah Palin to be “an idiot” — which is precisely the intellectual acuity — the meme — that the media has created and cultivated;  but then he (who names himself “StevietheStupid” in an ever so respectful and intellectual nod to Stephen Harper no doubt) also goes further by suggesting that Sarah Palin doesn’t deserve to live.  She is “a waste of skin”.  Then as if to rub bigotry into intolerance, he claims that not only that, anyone who agrees with her also don’t deserve to live.  CBC “moderators” approve it on the basis of what?  Sound, appropriate dialogue?  Tolerance?  Just another upstanding moral observation?  Bringing Canadians together?  Unity?  Civil dialogue?

Sarah Palin is a waste of skin….those that support her wacky views are no better.

In the words of Gump….stupid is as stupid does….

One commenter named NovaMan (that would mean “new man”) appealed to the sort of Hitler-esque model, and called her — a human being — a “virus”.  Clearly a virus is something we all want to eliminate.  To clean ourselves of.  Who cares!  APPROVED by the CBC moderators.

Another one goes on for three full paragraphs in which he seems to try so hard to appear “intellectual”, but all of the paragraphs are ridiculous.  The last one, in which he first allows that “The two events may not be directly connected” (Sarah Palin having a bulls eye on key electoral districts and the gunman’s rampage) — gee, ya think? — includes this bit of nonfactual stupidity (which nonetheless got a three-to-one “Agree” rating):

… The two events may not be directly connected, Sarah Palin is not responsible for Arizona. However, as an individual that represents the people (and this is the real reason she is being singled out, she’s a public official), it is not her place to demonstrate a complete lack of respect of the public regardless of what their political beliefs are. Her actions contribute to the problem because of her position. The Anne Coulter and Bill O’Rielly’s of the world are wind bags that we can choose to ignore, but Sarah Palin is the elected representative of the people – she should know better.

I’m constantly amazed, as I read these, that these people apparently don’t even watch and/or read the CBC, which, as I’ve shown, 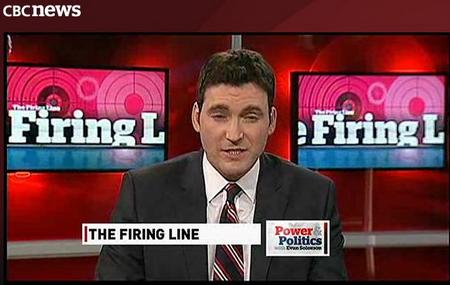 constantly, and to this very day, uses military and weapons-related and specifically gun-related imagery, including gun sights and crosshairs and rhetoric including “targeting” and so on, in its presentation of…. news!  And they use it in their opinion pieces.  And in discussion panels, as I’ve pointed out these last few days.  The commenters constantly blame Sarah Palin for the murders on the basis that she used such imagery, and they call it “despicable” and “horrendous” (etc) and again — actually blaming her.

As usual, the “Canadians” represented by the state-owned media display their rabid anti-Americanism at every opportunity: Sarah Palin is “an absolute IDIOT”… and (therefore) Americans will probably elect her. This, based on the “fact” that he “knows the Americans”.  APPROVED by the state-paid CBC “moderators”.

Sarah Palin is an absolute IDIOT!  I truly wish she would just go away, but knowing the Americans they will probably elect her.

This one seems to be advocating violence against her to “shut this woman up”.  Who’s he talking about?  Ex-wrestler Jesse Ventura?  To what? Pulverize her?  APPROVED by the CBC “moderator”!

someone has to shut this woman up

Watch out: here comes a genius:

This tragedy would not have happened if Fox News didn’t exist.

Two-to-one agreement from the CBCers on this one, in which the writer makes a direct comparison between the murderer and Prime Minister Stephen Harper, whom he also describes as ” the religious wing-nut”.  APPROVED by the CBC.

This retarded gun lover is just as dangerous as our very onw Stevie Harper, the religious wing-nut who is in love with all that is American and has a close realtionship with George Bush, and the National Riffle Association. I say let’s take our Canada back, by getting rid of Stevie the George- Bush, Repulican, Gun-lving, American wanna be. Enough said.

Here’s someone who will never get that check written to any mental health advocacy societies:

Sarah Palin reminds me of the slow kid in class:

You pat her on the head and tell her she IS special as she goes back to eating glue and crayons….

But don’t worry, it’s not personal, and these aren’t personal attacks by hate-filled Canadian leftists:

Ya, and her daughter didn’t make it as a winner at dancing either, even with mommies help.

This was APPROVED by the state-owned CBC “moderators”, possibly because it is so civil and sane:

[…]  It is possible the republicans could control the house, the senate and the presidency after next election … and you know what that means … Let the killin begin … I’m not inflamming nothing … Those are the words of the right not mine

One writer makes the intellectual observation that Sarah Palin is “a two faced [email protected]”  APPROVED possibly on the basis that it is respectful dialogue.  And look at the Agree/Disagree numbers.

What a two faced [email protected]

One guy wrote that “It’s times like these that kinda make me wish the Soviets had won the Cold War.”

And what we’ve got here is some more tolerant and level-headed, moderate and not-at-all extremist or asinine, stupid, ironic if only they knew the meaning of the word, left-wing speech, right here (with a seven-to-one Agree to Disagree ratio):

Palin….You are such an IDIOT!
You exemplify everything that is wrong with the USA.
A light? Really? Your country is a light? Your country is a cesspool of gun toting psychotic religious zealots….just like you.
How can a country that nearly voted you into the second most powerful office on the planet be a light? You….you who believes in a magic man in the sky. You who believes dinosaurs and humans co-existed. You who couldn’t string a coherent sentence together if your life depended on it.

Prasie the lord and pass the ammunition. You disgust me Sarah Palin.

I’m still reading… but it’s hard to lower myself to this level.