I’ve been harping on this theme for a long time now—that is, the FEAR MONGERING of Barack Obama, and that of the compliant liberal media like the state-owned media in Canada.

I think a good case could be made for a study in how these economic recessions —certainly this one— are actually more politics and media-driven rather than simply being the result of the regular economic cycles some of us studied in university.  A result of politics, spin, and fear mongering, for nefarious—mostly left-wing political—purposes.

Here’s a snippet from an EXCELLENT and very short article in today’s Wall Street Journal online.  The whole thing is only about 45 second read.  Below that, I’ve pasted some previous blog entries of mine in which I’ve documented how various experts have noted that recessions can be—if not created, then at least exacerbated—by media and politician and “expert” spin.  It makes this a long blog entry, but it’s a good tantalizer for some budding economics student.

Obama’s Rhetoric Is the Real ‘Catastrophe’

President Barack Obama has turned fearmongering into an art form. He has repeatedly raised the specter of another Great Depression. First, he did so to win votes in the November election. He has done so again recently to sway congressional votes for his stimulus package.

In his remarks, every gloomy statistic on the economy becomes a harbinger of doom. As he tells it, today’s economy is the worst since the Great Depression. Without his Recovery and Reinvestment Act, he says, the economy will fall back into that abyss and may never recover.

This fearmongering may be good politics, but it is bad history and bad economics. It is bad history because our current economic woes don’t come close to those of the 1930s. At worst, a comparison to the 1981-82 recession might be appropriate.

Mr. Obama’s analogies to the Great Depression are not only historically inaccurate, they’re also dangerous. Repeated warnings from the White House about a coming economic apocalypse aren’t likely to raise consumer and investor expectations for the future. In fact, they have contributed to the continuing decline in consumer confidence that is restraining a spending pickup. Beyond that, fearmongering can trigger a political stampede to embrace a “recovery” package that delivers a lot less than it promises. A more cool-headed assessment of the economy’s woes might produce better policies.

is an economics professor and author of several books and textbooks.

And as promised, here are some of my recent previous blog entries on that subject, as I explained above.  (I have been building a bit of a case on this, and the latest entry is mostly a reprint from THIS LINK): 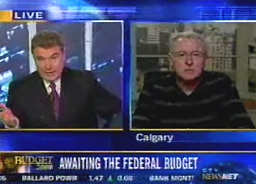 Things that won’t be repeated in the liberals’ media division, so I created this web site:

CTV Newsnet anchor Dan Matheson:  ….We lay Canadians hear so much conflicting information and [Bank of Canada Governor] said this very emphatically:  “We do not have the fundamental problems in Canada that so many other countries do.”  So does that mean we are panicking?  Are we overreacting?  Or is the state of our economy such that we really do need to take some dramatic change?

Frank Atkins: Well I have to agree I think we’re panicking.  We’re really, really overreacting today.  … And so when you look at what’s coming in fiscal policy, you have to say that boy, this is a real overkill that we’re playing here, given that the Canadian economy is not really as bad as we’re being led to believe.

Let’s add that to these other unmentionables I’ve blogged about in the recent past: Here’s my January 14 2009 blog entry, which also alludes to an October 6 2008 blog entry:

And here’s something they also fail to report on their big scary “YOUR BUSINESS” segment newscast, even though I think I can somehow prove that they have the information in hand over there at the big socialism-reliant state-owned media behemoth: 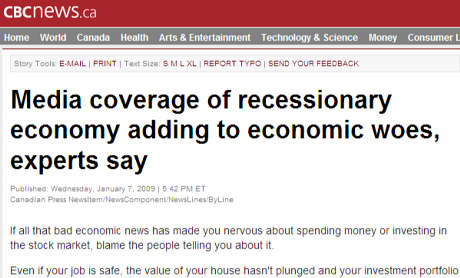 If all that bad economic news has made you nervous about spending money or investing in the stock market, blame the people telling you about it.

Even if your job is safe, the value of your house hasn’t plunged and your investment portfolio isn’t keeping you up at night, some experts say the media is scaring consumers from opening their wallets, which in turn is only adding to the woes of Canada’s recessionary economy.

“Media attitudes do help to shape how consumers feel,” said Glen Hodgson, chief economist at the Conference Board of Canada, an Ottawa-based economic research group.

But the CBC doesn’t care.  Or worse, they do.  They are fully aware, and carry on as they do, anyway.  For some reason.

In fact this is at least the second time they’ve been told that the media is largely driving this recession.  Not including the dozens of times I’ve mentioned it.  Over… and over… and over… repeatedly…

For example, they did a report last year which I blogged about in a blog entry called “CBC constantly trashes economy; asks academic if it’s possible to talk nation into recession”.  Here’s part of that actual entry: 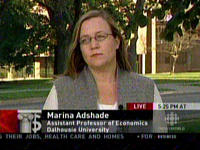 CBC anchor Harry Forestall: Do you worry sometimes that we could we could effectively talk ourselves into a recession?  Is there any risk of that?

With no sense of irony whatsoever at the CBC, he asked that question over the huge CBC banner tendentiously reading “MARKET MISERY”.  Previous banners today and since roughly the exact date Stephen Harper was elected have read things like “THE R-WORD?” and “THE

D-WORD?” and “ECONOMIC MELTDOWN”, and “ECONOMIC CRASH COMING?” and “HEAD FOR THE HILLS”.  (Never with the term “so-called” before those things, as they do “the so-called war on terror”.)

And the guest, Associate Professor of Economics at Dalhousie University, Marina Adshade, threw this back:

Marina Adshade:  “Oh I definitely worry that we can talk ourselves into a recession.”.

It’s not that they didn’t know that—they certainly did.  They bank on it.  It’s just that they probably didn’t exactly want that cat to be let out of the bag, at least not quite so publicly. Layton and Dion are gonna be pissed!

“So much of what happens in the economy depends on how people perceive what’s going to happen in the future in terms of their employment and in terms of their investment and if people start getting concerned about those things, then they start scaling back on their spending, people start losing their jobs, because people aren’t buying the goods that they’re producing anymore, and it definitely can create some problems in the economy.  One of the things that kept the U.S. economy over the summer is that Americans continue to spend, they continue to buy.  In the last month that’s really changed and they started to scale back on their spending, I think if Canadians get concerned about a recession that’s exactly what could happen here.”

I could just about hear the CBC producers and crew screaming from control rooms across the country.  Damn!  We set him up with the university professor! He had to ask that question?  And was she vetted?  What is going on around here?!

Well anyway, it confirmed that their apparent tactic is worth continuing. You can talk down the economy by constantly raising doubts and trash talking it, just like Dion and Layton do.  It’s just that it’s more embarrassingly obvious when they do it now.

But we support the troops by golly!

Here once again are the links to those earlier blog entries:

•  CBC reports on “wretched retail”; fails to report on “fabulous retail” when sales were rising

And here’s another goodie:

For further reference, readers and economics students could simply read my article:  “War on Recession?  Know the real enemies”, and simply read my blog every day and see how I expose the CBC and its apparent effort to trash-talk the capitalist economy as best they can, as I see it (and, I think, prove it).  Like in these blog entries:

• TAKING BETS Part VI:  Will CBC report it? Pension fund to invest half a billion in energy projects

• TAKING BETS Part II:  Will CBC report it? McDonald’s sales up 7% in January, along with Wal-Mart

• TAKING BETS Part I: Will CBC report this?—Wal-Mart sales up—even ahead of their own expectations