Newsquips are updated through the day. 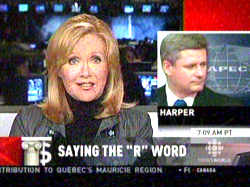 1.  HAPPY AND EXCITED CBC ANCHOR—The “R WORD”—complete with picture of Harper!  Look at that smile!  Yes it’s the CBC gleefully promoting “The ‘R’ Word”, year three.  This happy-looking screen capture at left from this morning on CBC Newsworld is graphically axiomatic.  It depicts, to me, a news anchor who appears almost pleased with her success—a bit of a fait accompli as they say in The Nation Of Quebec—in pushing and then finally achieving a goal.  It’s just another CBC scene today but one which has been repeated all day every day for the past three years.  The state-owned, socialism-reliant and left-wing advocating CBC has been reporting on a “possible” “recession”and “SAYING THE ‘R’ WORD”—as I’ve shown here with screen captures—and/or totally ignoring historic record-breaking rising stock markets and general economic good news—for at least two or three years… pushing, pushing, mindlessly pushing that potentiality… and stoking fear and diminishing consumer confidence and firmly planting doubt in people’s minds as best they possibly could… and then pretending they’re nothing but bystanders and earnest and altruistic reporters of “facts” when it finally happens.  As I’ve said before, the pessimistic talk will magically ease on January 20, 2009.  Happy-talk will appear on the liberal media landscape. The “R” word will be redefined to mean “RECOVERY”.  … Think this “MARKET MELTDOWN” capture was from this week or last week?  No—it’s from a year and a half ago when markets were booming to historic highs: 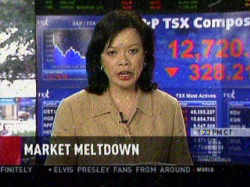 BRECKENRIDGE, Minn. — A woman who worked for [Democratic Party Senate candidate] Al Franken earlier this week during the Senate recount in one county ended up counting ballots as a nonpartisan volunteer here Saturday in a recount that grew heated at times.

Maggie Vertin, who spent two days in Fergus Falls for Otter Tail County’s recount as an observer for Franken, was one of eight volunteers who assisted with the Wilkin County effort in Breckenridge.

Bob Westfall, who was in Breckenridge on Saturday as an observer for [Republican incumbent Senator] Norm Coleman, said he had concerns when members of his team learned a ballot counter had worked for Franken.  “I don’t understand how you can switch from being partisan one day to being neutral today,” Westfall said.

It’s easy to understand:  liberals and leftists think being a liberal is “neutral” and “non-partisan”.  They think that’s the middle ground. “Bias” is only a conservative person, or a conservative thought or idea.  The far-left CBC is, for example, “normal” and “neutral” and “non-partisan” to most Canadians.  To some on the CBC-luvin’ far, socialist left, media which isn’t state-owned and state-run is inherently “right-wing” and “biased” simply on the basis that they’re not state-owned and don’t rely on and embrace socialism.  That’s how twisted and misinformed and unsophisticated—indoctrinated by the left—both our nations have become.  This concept is ingrained in their inner core beliefs as a result of decades of liberal-left indoctrination by a liberal (and further left) media who present conservatives as not normal—as suspect; or as “extremists”, or as the “Christian-right”; but liberals as perfectly “normal” and “balanced” and “progressive” “thinkers” who are “smart” and “nuanced”.  It’s taught in schools as a fact of life.  Socialism is normal and good.  It’s capitalists that you have to watch.  It’s ironic because conservatives are the ones who are generally traditional, meaning exactly that:  normal!

The media and academia are so liberal and left they don’t even know how liberal and left they are anymore.  That’s why they glibly mock Fox News Channel as “biased” and “unfair”  and “not balanced” and “right-wing”.  It’s on the basis that FNC presents both sides—it’s not just the “normal” left and far-left seen in nearly all other media.  FNC allows conservatives to present their point of view… which I guess if you think about is of course not fair to the liberal-left.  I’m sure you see their point.  Liberals and the left don’t have a chance when conservative ideas are allowed to be presented and debated in public.

3. Obama causes market drop, right media?  I’ve pointed this out before (item 7 in this post), because the liberals’ media division constantly did this same thing whenever President Bush spoke, claiming the market dropped whenever he spoke.  Since Friday, the media — including the socialism-reliant CBC which knows SO much about free market capitalism and the stock market — has been crediting Barack Obama with the nice Friday rise in the markets (both in the U.S. and in Canada) simply because he came up with his Treasury Secretary choice.  Today, I wonder if they will blame him for people losing billions, because as I once again tracked it from the moment he started talking this morning until the minute he finished, the market lost BILLIONS in value—well over a hundred points or about 1½ percent.    Here’s my screen captures, in order, over the course of just a half an hour of Obamaspeak, in which the point was to re-assure the world that he’s on top of the economic turmoil. 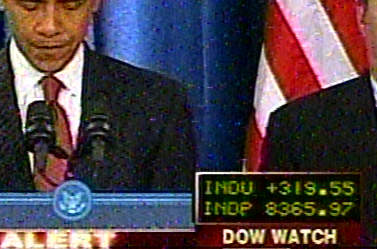 (When he zipped it, the market went back up a bit.)

4. Fair and balanced Fox News Channel’s Hannity and Colmes show to lose the liberal half, Colmes.  Alan Colmes says it’s time to move onto other projects, including building a new weekend show on FNC.  He’ll carry on with his Fox Radio show and will be a regular commentator on other FNC shows. No word on his replacement.  Golly where are they going to find another liberal?

5. Do like these folks and avoid businesses and organizations that avoid “CHRISTMAS”.  Try a little PUSH-BACK on for size, you delightful hyper-secular “progressive” fundamentalist “inclusionists”.

PATCHOGUE, N.Y. —  An annual parade of boats on a Long Island river that dropped “Christmas” from its name has apparently lost lots of supporters.

Brookhaven-based fireworks company Fireworks by Grucci dropped its sponsorship after the Greater Patchogue Foundation removed “Christmas” from the parade’s name. The change was made after some residents complained the name wasn’t inclusive enough.

Grucci vice president Philip Butler opposes the secularization of Christmas. His supporters encouraged area residents to stay away from the parade on Patchogue River.

Organizers say the parade still was a success.

It successfully “included” 33% fewer people, and lost a major sponsor, but it was still a “success”.  That’s success, liberal-style, because at least they dumped “Christmas”.

6. Currently working on the annual PTBC “It’s called Christmas” thing.  Get your good, borderline, and bad stores and organizations !  We need to know who to patronize and who to avoid.

Canadians prefer to call it Christmas. Not “holidays.”