Benghazi: Obama and His Ilk Hung Chris Stevens and Others Out to Dry

This past Friday the State Department released internal docs showing that Chris Stevens, U.S. Ambassador to hell’s corridor in Libya, begged Obama’s boys in D.C. to ramp up security in Benghazi. And, as we all know now, he got nothing from the State Department but was allowed to be tortured and murdered by “democracy seekers” from the “Religion of Peace” in the “liberated” nation of Libya.

As far as I am concerned, blood is dripping from Obama’s golf-gloved campaign hands. Whatever do I mean, you ask? Well, according to James Rosen’s findings in the newly released damning papers, it’s crap like …

· On September 11—the day Stevens and three other Americans were killed—the ambassador signed a three-page cable, labeled “sensitive,” in which he noted “growing problems with security” in Benghazi and “growing frustration” on the part of 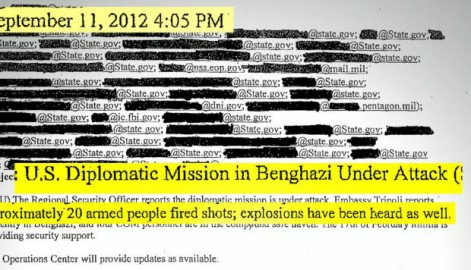 local residents with Libyan police and security forces. These forces the ambassador characterized as “too weak to keep the country secure.”

· Roughly a month earlier, Stevens had signed a two-page cable, also labeled “sensitive,” that he entitled “The Guns of August: Security in Eastern Libya.” Writing on August 8, the ambassador noted that in just a few months’ time, “Benghazi has moved from trepidation to euphoria and back as a series of violent incidents has dominated the political landscape … The individual incidents have been organized,” he added, a function of “the security vacuum that a diverse group of independent actors are exploiting for their own purposes.”

“Islamist extremists are able to attack the Red Cross with relative impunity,” Stevens cabled. “What we have seen are not random crimes of opportunity, but rather targeted and discriminate attacks.” His final comment on the two-page document was: “Attackers are unlikely to be deterred until authorities are at least as capable.”

· By September 4, Stevens’s aides were reporting back to Washington on the “strong revolutionary and Islamist sentiment” in the city.

Scarcely more than two months had passed since Stevens had notified the Department of Homeland Security, the Department of Justice and other agencies about a “recent increase in violent incidents,” including “attacks against western [sic] interests.” “Until the GOL [Government of Libya] is able to effectively deal with these key issues,” Stevens wrote on June 25, “the violence is likely to continue and worsen.”

· After the U.S. consulate in Benghazi had been damaged by an improvised explosive device, earlier that month, Stevens had reported to his superiors that an Islamist group had claimed credit for the attack, and in so doing had “described the attack as ‘targeting the Christians supervising the management of the consulate.’”

“Islamic extremism appears to be on the rise in eastern Libya,” the ambassador wrote, adding “the Al-Qaeda flag has been spotted several times flying over government buildings and training facilities …”

· In the days leading up to 9/11, warnings came even from people outside the State Department. A Libyan women’s rights activist, Wafa Bugaighis, confided to the Americans in Benghazi in mid-August: “For the first time since the revolution, I am scared.”

From the 166 hellish pages we see a stack of warnings, via multiple cables sent to D.C. from Chris’s own laptop about which diddly was done—and that being after prior bombings of the Red Cross and our own compound and an assassination attempt on the British ambassador. Whiskey Tango Foxtrot. This is gross and inexcusable.

If what happened in Benghazi on 9/11 was not an act of terror, or an act of war, I don’t know what is. What’s the “Religion of Peace” got to do to wake this administration the heck up? Destroy one of Obama’s favorite golf courses?

Oh, BTW: Missing from the extensive documents is any mention of a YouTube video ticking these “peaceful protestors” off.

Someone please forward this over to Romney’s campaign for talking points for [last] Monday night’s debate on “National Security.”

Check out my latest video, F.I.U. Lady Prof: “You Shouldn’t Be Allowed to Graduate if You Believe in Creationism.”

Doug Giles
Doug Giles is the man behind ClashDaily.com. In addition to driving ClashDaily.com, Giles is a popular columnist on Townhall.com and the author of the book Raising Righteous & Rowdy Girls.

He’s been a frequent guest on the Fox News Channel and Fox Business Channel as well as many nationally syndicated radio shows across the nation — which, he believes, officially makes him a super hero.

In addition, Doug is an occasional guest host on New York City’s WABC (The Jason Mattera Show) and he is a weekly guest, every Friday at 7:45am[et], on America’s Morning News (155 markets).

Giles and his wife Margaret have two daughters: Hannah, who devastated ACORN with her 2009 nation shaking undercover videos, and Regis who is an NRA columnist, huntress and Second Amendment activist.

DG’s interests include guns, big game hunting, big game fishing, fine art, cigars, helping wounded warriors, and being a big pain in the butt to people who dislike God and the USA.

“Doug Giles is a good man, and his bambinas are fearless. His girls Hannah and Regis Giles are indefatigable. I admire the Giles clan from afar.”
- Dennis Miller

“Doug Giles must be some kind of a great guy if CNN wants to impugn him.”
- Rush Limbaugh

“Doug is funny and insightful. Giles is always spot-on with his analysis and so incredibly hilarious, as well. Whether you’re 15 or 50, if you love God and America, Doug Giles is for you!”
- Jason Mattera, NYT best-selling author of Obama Zombies and Editor-in-Chief, Human Events

“Doug is a raucous and rowdy mix of old-school, traditional conservative values with the kind of eff-you attitude folks like Ted Nugent have made millions on. He’s one part rebellious rock star, one part crusading missionary, and another part rough rider.”
- S. E. Cupp, NYT best-selling author of Why You’re Wrong About The Right and Host of The S. E. Cupp Show on GBTV.com

Previous articleLiberal news mag slams liberal academia, brainwashing; pretends it has nothing to do with it.
Next articlePublic school enrollment has fallen 11.3% in 14 yrs in BC, while private schools are up 22%.