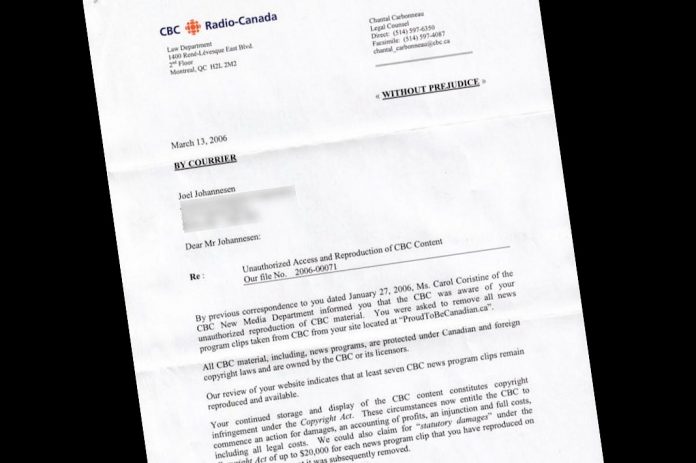 I’ve received several emails from the Conservative Party of Canada (I’m on their email list), about the CBC suing them for using clips of their news programs in their ads. They need my help! Please help! Send money! Support us! Tell your friends! The emails include a copy of the CBC letter to them. Here’s some quotes:

…We’re fighting back against this lawsuit as hard as we can.

But we need your help.

Are you with us?

Chip in to our legal defence fund today, and let’s show the CBC that Conservatives won’t back down.

What the CBC is doing is terrible. It’s a political hitjob made worse because it’s being done by a state-owned, partisan, liberal-left-friendly and clearly anti-conservative, taxpayer-funded entity, using tax dollars to hit a political party they obviously hate, one week before an election, in order to help drive an agenda, and an election. It’s a deadly serious affront to our democracy. No doubt.

But hey, I wonder where the Conservative Party was when me and this website, ProudToBeCanadian.ca, were threatened in much the same way by the CBC, for much the same thing (my use of material being perhaps even more legitimate), back in 2006. That was when the CBC’s lawyers sent legal notice to me, by courier (sister corp Canada Post being total shite, as we know), to my home, threatening me with family-bankrupting damages unless I complied. 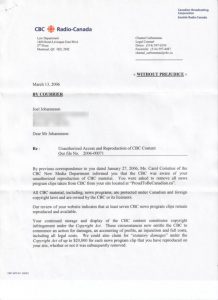 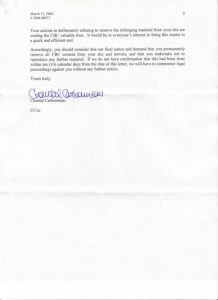 Where was the Conservative Party? I’ll tell you where. NOWHERE. Didn’t help me at all. Whatsoever. No advice, no links, no mentions, no emails, no “keep up the good fight and we’re behind you,” no nothing, at all, ever. They literally couldn’t have given a smaller crap.

And I was helping the crap out of the conservative cause, way back then, and way before then. At that time, PTBC was a much more popular site — arguably one of the top two or three conservative sites in the country, at a time when there were few soles brave enough to “come out” as conservative in quite so public a manner. We were probably getting more daily hits to the site than the Conservative Party website did in a month. I like to think I helped — a great deal — getting them to victory.

But nothing from them. Nothing.

And by the way, virtually nothing from virtually anybody else either, just so you know.

Note that the letter to me, above, followed a threatening email to me from the CBC lawyers, in which they threatened that they would be “monitoring your website…”. That’s the government-owned CBC, folks: instead of we the people monitoring them, they would be monitoring us — PEOPLE’S thoughts and how they frame their expression of opinions, and watching out for any criticism of the state-owned news media, and if they feel the need, they will RUIN you and your family, starting with THREATS and MONITORING. Sound like your kind of Canada? Or does it sound more China-like?

Here’s how other media companies handle this sort of thing: I long ago created YouTube videos using various TV channel footage. Fox News Channel once indicated to me through YouTube that they do not have a problem with my using their footage. One video has had well over SIX MILLION views — which is more than the average CBC show ever gets. (And that may be my only solace).

So forgive me if I’m not too moved by the Conservative Party’s plea for help from the likes of me. They’ve got millions of dollars and a huge national pedestal to launch their fight, and staff lawyers, and seats in Parliament, and they’d been in power for ten years since I was forced to capitulate to their demands. I only helped them get all of that. Who am I?

Thus you can see this latest affair is fraught with irony. I think the CBC is doing this to the Conservatives to rouse voter sentiment against the Conservatives. The CBC knows that this specious lawsuit could remind voters about how Conservatives feel about the CBC, and I think they’d like voters to think the Conservatives will eliminate the CBC (and if the Conservatives did, I would send them roses). All of this deep-state-style activity is, as I’ve said, horrible for our country, if not utterly corrupt. But the actual effect of their perfidy may be the exact opposite of what they desire. It may backfire badly. It might remind Canadians just how biased and unfair and politically powerful the state-owned media really is, and help explain and justify what conservatives (and only a very few big-C Conservatives) have been complaining about for decades. And then once again vote for the Conservatives.

Maybe the CPC should join my PTBC email list, instead of the other way around.

Here are some of the many posts I wrote about it back in the day:

CBC to me: “We will be monitoring your site…”

Why would state-owned CBC spy on me?