To the NDP, I’m not a good, hard-working, individual Canadian. But they want to represent me anyway.

The Canadian NDP leader, Tom Mulcair, said this, among other nonsense, in his latest email to me, as part of the NDP’s apparently desperate (certainly extremely repetitive and annoying) campaign to raise money, in apparent competition with Conservatives:

“Unlike the Conservatives, our support comes from individual Canadians like you.”

“Unlike the Conservatives?” Really?

As Bill O’Reilly might say at this point, I’m a simple man. So I’m not sure what he means (or at least I’d like to pretend I don’t, in order to make my very lucid and argument-winning point in a non-threatening manner for the benefit of the faux tender sensitivities of the “progressive” readers of the Left who have just been caught trying to BS me again, and to avoid their next reflexive “argument,” which is to call me a homophobe, or a racist, or a millionaire and billionaire, a carbon polluter, or of launching a “war on women.”

Does he mean that the Conservatives get support not from “Canadians like me,” but rather from those big nasty, evil, possibly 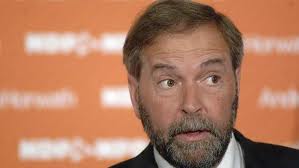 capitalist, and dammit, hardly-at-all socialist corporations (cue horror movie sound track)? That accusation would be weird, since it’s illegal for donations to be received from corporations, just as it is illegal for Mulcair to get their NDP “support” from crony and faux capitalist corporations which have come to rely on big huge nanny-state governments, and also those  —  oh Gaia forgive me for speaking more of that awful truth  —  that other kind of corporation: the equally big, multi-million or multi-billion-dollar, public-sector labor unions, which, if I may borrow some of the Left’s own rhetoric, are sometimes also even multinational (and can I please add the words “industrial complex” too?).  And we know that doesn’t happen, right? I mean it would be against the law. And Mulcair would report that, right?

So, is he accusing the Conservatives of something, and if so, why hasn’t he called the RCMP? Unlike the NDP, or, say, Tom Mulcair, I would call the cops if I thought someone was, or was trying, to break the law.

Surely the NDP isn’t trying to BS me as if I were a total idiot. Right? I mean they respect regular individual Canadians so much, ‘n stuff.

“With the help of well-connected insiders and big corporate donors, the Conservatives don’t have trouble raising a lot of money.”

Here’s some other language used in emails to me in the past few days:

“New Democrats do things differently. We rely on the support of hard-working Canadians – one grassroots donation at a time.“

Conservatives apparently rely only on all those wealthy layabouts, the rich lazy asses, all those millionaires and billionaires, the rich trust-funders, and lottery winners. Not the “hard-working,” set like the NDP do. And Conservatives aren’t “grassroots.” They’re some sort of nefarious AstroTurf group-think clan. Well as long as the NDP aren’t bigots or anything!

And just to make sure they’ve imprinted their class warfare rhetoric with sufficient vigor, they emphasize this in another email:

“You can bet his deep-pocketed friends will help make that happen.”

“Deep-pocketed!” Oooh! That’s bad, right? You should never be “deep-pocketed! That’d be bad and wrong! The message is clear though. Conservatives are all deep-pocketed, lazy, bad folk. NDP supporters are shallow-pocketed (that’s good!), yet “hard-working,” and good folk. Divide the nation, create hate and animosity throughout the land, win the next election, and conquer. Lovely message.

Weird that they assume I’m one of them, though, addressing each email as “Friend”  —  I mean for the purposes of their fund raising  —  especially considering I’m so not. They seem to hate every ounce (or whatever Euro-measure) of me otherwise.

Conservatives keep contacting me too, asking for support from ordinary and hard-working Canadians like me. And God knows I am ordinary (except for my extraordinary good looks and charm). So (aside from that) they think I’m ordinary, and obviously an “individual,” and they’ve never suggested I’m a lazy-ass (nor do they suggest the NDP members or supporters are).

Not to ruin the ending by introducing inconvenient truths… OK I am: I know for a scientific fact that Conservatives do get their support from individual, hard-working, sometimes shallow-pocketed Canadians, just like me. I’ve actually looked at their donation lists and the official reports, and have seen the amounts that the enormous numbers of individual Canadians have donated to the Conservatives. Fact is, the Conservatives get most of their support from plain old Canadians like me, who each donate very small amounts of money. Like $5, or $20. It’s just that they have done it far, far more effectively than the NDP  —  possibly because more individuals Canadians want the Conservatives to win elections. I mean that’s certainly a logical conclusion.

And here’s a message for my “friend” Tom Mulcair, and his NDP: I’m a conservative, which in no way precludes me from being every bit a good Canadian. I’m not rich (or “deep-pocketed”), but rich is something I aspire to be. I’m hard-working (certainly at least as hard-working as most public-sector union members, and those folks who have been nurtured to be totally reliant upon the state and various social welfare entitlements and government social “support” programs and schemes). And I am certainly an individual. But this is where I get confused. Isn’t that something you and your socialist party would be against, inasmuch as you seem to want to create a nation built on the notion of the “collective” rather than the individual?

I don’t know. Maybe check all of your verbiage. None of it really rings true, in any which way.