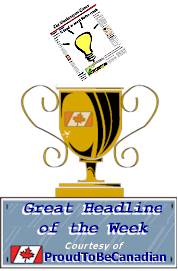 Our Good Headline Of The Week Award goes to the headline on Kelly McParland’s piece in the NatPo today.

“David Miller lies down with unions,
gets up with strikes”

Has that cheap sex feel to it, which is completely appropriate.

The text is good too (SPOILER ALERT: contains closing paragraphs):

…Miller has spent the recession acting as if there was no recession. He didn’t let it interfere with his record budget. He didn’t let it get in the way of pay rises for the TTC, police, firefighters or anyone else. He didn’t let it stop council getting its own increase, and he opposed an effort to have councillors give it back. He’s been out promoting huge expenditures on transit, on bike paths, on “beautification” projects that are anything but necessary but are dear to his little green heart. He acts like he can’t believe what he’s hearing when the federal or provincial finance ministers suggest this might not be the moment for his latest billion-dollar scheme.

So why should he expect the people on the city’s payroll to accept his sudden bleats of poverty just because he doesn’t want to pay them for sick days they don’t use?

Sure it’s an extravagance. Sure it’s totally unnecessary. Sure they could live without it.

But why should they? Miller never does.

GRIEVANCE:
Alas, the piece fails to mention the word “liberal” or “left” or “socialist” even once, even though that’s exactly who and what it’s all about.  Clearly the article wasn’t about a conservative, or else typically (in the liberal media generally —not picking on Mr. McParland) the word “conservative” would be all over it.

So it’s not hard to imagine why so many voters don’t have a clue.

Extra #1:  Trouble with this ludicrous Globe and Mail headline is, Miller hates guns; wants them “banned”.  So “sticking to his” would be problematic.  Maybe that’s his problem.

Extra #2:  Sadly, this Winnipeg Sun headline has nothing whatever to do with left-wing political parties. 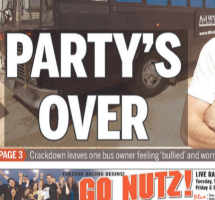