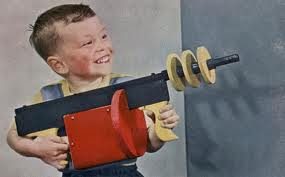 The name Jesse Sansone may not register with most readers, but how about the Crayon Dad?

This was the 26-year-old man who earlier this year in Kitchener, Ontario, was handcuffed, arrested, and strip-searched by the police, and whose three children were removed by Family and Children’s Services, all because his four-year-old daughter had drawn a picture at school that a teacher considered worrying.

“I didn’t even know why I was being arrested for a long time,” this disarmingly gentle, rather innocent man explains. “I went to pick up

my daughter from school, and the police were waiting for me. I was handcuffed, put in the back of the cruiser, with children from my daughter’s school looking in. When I asked the police why they were doing this, they advised me not to say anything.”

The charge was, it turned out, possession of a firearm.

Earlier this week, the police issued a rather perfunctory apology, not for arresting and humiliating him, but for the strip search.

“It doesn’t seem enough,” Sansone says. “I believe I deserve something more. Nobody has ever seen the picture, as it was rubbed off the board. They say it was of me shooting monsters. But so what?”

The teacher who made the complaint apparently thought the alleged picture drawn by a four-year-old of daddy fighting monsters merited calling Family and Children’s Services, who decided to involve police, and Jesse and his wife’s horror began. They have been sweethearts since they were teenagers, they are happily married, religious and law-abiding people. Good folks.

“At no time did anybody actually call me, and ask me anything,” he says, a little nervous and clearly still stunned by the whole thing.

“I mean, the school had offered me a job not long before, and the principal knew me. He later called to apologize, said he knew nothing about it, which I find difficult to believe.”

His children have had to move to another school of course, after the ritual humiliation and traumatization. Pathetically, his daughter thought she had hurt daddy. And his reputation was hardly improved by the number of cops and social workers getting involved. Yet at no time was there any evidence of any wrongdoing or any gun.

When the school authorities were asked about the appalling case, a pompous twit at the board explained that they “co-parent” with parents. The audacity and arrogance is breathtaking!

Those who work at the school itself have said very little, and the panicked teacher has not shown any contrition or, as far as we know, been penalized or suspended. The police, who according to Sansone misled him and gave him no chance to explain, built a blue wall around those officers and their superiors who thought this civilized behaviour in a free society.

Jesse would like a genuine apology, and while he is not asking for it, surely deserves compensation.

If he was an Islamic terrorist, there would be lawyers all over him. Alas, he’s a simple, working-class guy living an ordinary life, and those people apparently don’t matter very much in modern Canada.