Liberal Canada: If everything goes into the crapper, play the Trudeau card. (Wink!)

Liberalvision CTV’s web site has invoked the Trudeau.  This is, as we in the sensible set know, a sure sign that either the Conservatives are up to very good, again, or the Liberal convention and leadership race (and wiener stand!) has gone into the crapper and needs a fix.

But of course they did it with aplomb.  Without even a hint of embarrassment (bare asses being a Liberal Party specialty, this year), shoving aside even a modicum of calm, common sense,  moderation, balance, poise, and dignity in their presentation of the day’s “top news”, the liberal media mavens at CTV (potential Governor-Generals, all of them, if only the CBC is dismantled) created the headline du jour in their “Top Stories” section:

“Delegates chat with Trudeau crown prince” [Link has since disappeared]

In order to verify that it is in fact a “top story” and a “news” one at that, here’s a screen capture, for posterity (no liberals, sorry, by “posterity”, in this rare case, I did not mean that another liberal, least of all the Royal Crown Prince of All Get Out, has exposed his bare posterior du Royale on national state-run television, Bare-Ass Bob Rae-style or even Bare-Ass Scott Brison-style.  He’s royalty after all. Dink!  I mean wink!):

He’s the Royal Crown Prince of All Get Out.
Bow, citizens!  Do it NOW! 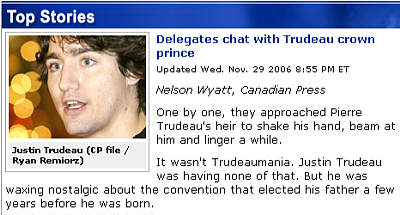 He’s such a dream!