Just to update you and save you the trouble, I visited the NDP web site this morning as I do a few times per month. Still nothing new. At. All.

They call themselves progressives. But really, their ideas and policies change very little from the original make Canada socialist! lunacy and bromides about economic and social and environmental and a thousand other flavors of “justice”; and basically just harken back, not forward, to the days of Marx and Lenin. 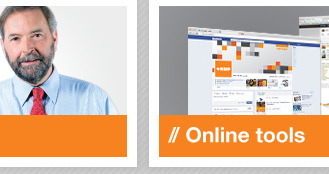 It still has lots of that sickening orange and the ever-so folksy smilin’ Frenchman Tom Mulcair who promises “leadership” and more income and wealth redistribution, as if trying to emulate the Marxist.ca web site.

And I also read the mainstream newspapers this morning, so don’t bother. In case you didn’t already know, Pamela Wallin, a Conservative senator, is the only government entity, ever, to spend too much taxpayer money, and suddenly, that’s bad, not good. Yes I know, it’s confusing. I think  —  yes I know I might be crazy  —  but I think the key word here is Conservative.

And I watched the leftists at the socialism-reliant, state-owned CBC News Network for a while. That was endumbening, but it was also funny.

As we know, patronizing these liberal-leftist or socialist or progressive mainstream media sources makes you dumber by the minute. So just before getting dumb, I switch to Fox News Channel and Sun News Network for a good ensmartening. A quick Rush Limbaugh chaser (available in Canada 9Am-noon PT!), and I’m good to go.

After I was ensmartened again, I reviewed some of my Twitter feed and caught this photo taken at the “Justice for Sammy Yatim”/anti-police (“Disarm the police!” … “Disband the police! … “FCUK you Toronto Police you killers!” … “Kill all pigs!” … “Kill that cop!”) rally, which was taken by a brave Faith Goldy of Sun News Network (as if I had to tell you. I mean duh. Can you just imagine the left-wing, state-owned CBC or pretty much any other “news” network besides Sun News Network letting an image like this leak out, thus breaking their narrative?). 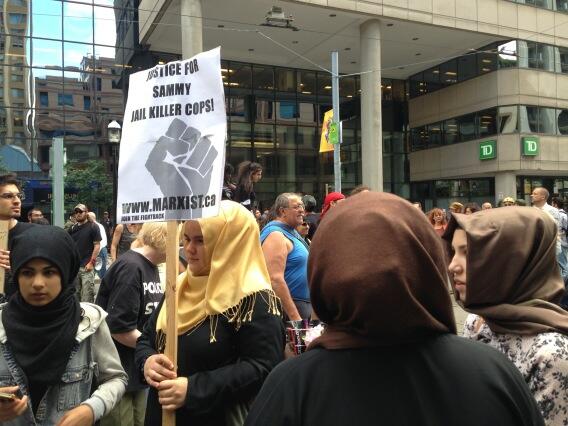 Seeing that dark, angry-looking, Che-Guevara-like, clenched-fist of the ever-so progressive Marxist.ca sign piqued my curiosity about what the other socialists/commies/progressives are up to these days. 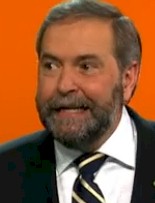 So naturally I clicked over to the Marxist.ca web site to get up-to-date on their idiocy. I visit them about as much as I visit the NDP.ca web site. I find little difference between the two.

Well there are some differences. For example, the Marxist.ca web site now has a permanent link to the NDP.ca web site. It’s not just in a “favorite links” list  —  in fact it’s a tab right up there in their header, alongside their “Home” tab and “About Us” tab and their other most important tabs. Alas, the NDP.ca site has no such reciprocal link. (That ain’t equal! Or “empowering!” Nor is it “link justice!”)

Oh and also, with regard to the aforementioned Sammy Yatim rally, according to one of the pro-socialist articles, the recent Toronto Police shooting of Sammy Yatim on that Toronto streetcar is because… capitalism. Yes that’s right: “Toronto police murder Sammy Yatim: The brutal face of the capitalist state“. Keep reminding yourself you’re not at the CBC website, or the NDP site. I mean just to keep things straight in your mind.

Of course the NDP Youth brigade was at

the justice for Sammy Yatim/anti-police rally this morning. Had a big banner. They were rallying for… not crossing picket lines. Because… I don’t know.

But I digress. Back to Marxist.ca (see I get confused too!). I love these bullet points in the Marxist.ca “About Us” page. They demand no alliances with the Liberals or Conservatives, but seem to ally themselves with the NDP, in their effort to nationalize everything and fundamentally transform (hi Barack!) Canada:

NDP to power on a socialist program

No alliances with Liberals or Conservatives.  NDP MPs must be the parliamentary voice of a mass movement against the conservative agenda.  Mobilize support by adopting socialist policies that answer the needs and aspirations of workers and youth.

Nationalization of the commanding heights of the economy; the top 150 banks and corporations

Break with the anarchy of the capitalist free market. No compensation to the millionaires, only those in genuine need. All nationalized enterprises to be run by workers control and management and integrated through a democratic socialist plan of production.

Pull out of NAFTA, WTO and other bankers’ deals that are the tools of imperialist exploitation. Strike back against U.S. imperialism and militarism. Nationalize the U.S. owned industrial giants and unite with American workers. For a socialist federation of the Americas as part of a world socialist federation.

As I said, there’s nothing new with the NDP. 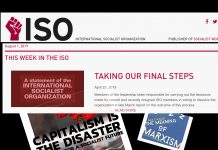 International Socialist Org to disband? But I thought socialism was a growing movement! 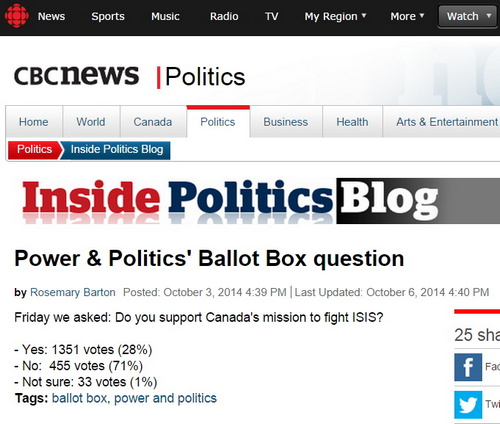