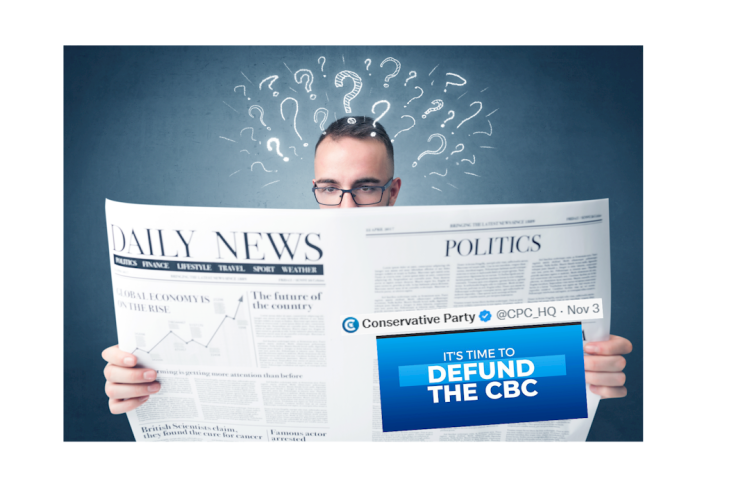 Five minutes ago the Conservative Party supported the Liberal Party’s state-owned CBC. division. (Despite me! And despite the state-owned CBC working assiduously against them, their interests, and a huge percentage of Canadians including me, for decades!)

Today they are all about defunding it. And thereby sounding like PTBC has for, well twenty-plus years.

Weird. As I noted here: 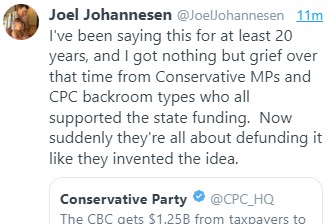 I’ve literally fought the Conservative Party to denounce and defund, once and for all, this travesty, the CBC. All my years of doing so resulted in squat. In fact worse than squat. Conservative Party MPs and other Conservatives Party and even my own PTBC readers bashed me for daring to utter such (apparent) blasphemy — as if the state-owned CBC were literally a sacred icon of the glorious socialist state that they — “conservatives” — seemed to adore so much. I never understood it. It was inexplicable.

In fact, the very few people who block me on Twitter are almost entirely either CBC reporters or Conservative Party hacks (or former hacks) who adore the state-owned CBC and (apparently) got tired of me ranting against it and trying to come up with bullshit answers as to why they and their “conservative” party supported it (while still sounding sane and not high). Like James Moore, former Harper cabinet minister and solid state-owned CBC supporter who was actually the cabinet minister (Heritage) in charge of the state-owned CBC. He blocked me after tiring of having to see and defend against my anti-CBC tweets (I guess — it’s not like he explained it to me!). I think his last comment to me was in response to my opposing, on principle, the concept of a state-owned new media and one which results in the government competing in business against its own citizens (a common thread of mine, and a sound conservative principle if ever there was one); to which he replied “Yawn,” then blocked me. 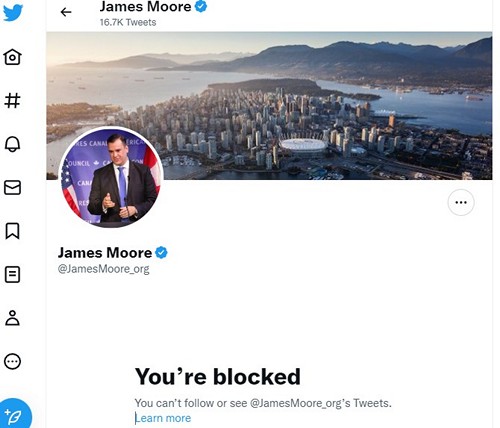 CBC reporters blocking me (here’s one) I can almost understand! But conservatives or Conservatives supporting the state-owned CBC is a real head-scratcher, and it has been for these twenty years or more; right up until five minutes ago when they totally flipped over and are now aboard the defund train, as if they were always on it — with no explanation given for the total 180 on this important — really fundamental — conservative principle.

Not that I’m complaining. Conservatives are all about changing slowly and carefully and with sound reason based on need, evidence, facts, reason (and so on); but when it comes to being, you know, conservative, I expect a much swifter change timeframe than 25 years.

So it’s good if (again inexplicably) late. It must burn James Moore’s butt. It burns me a little too though. They’re now using it — and sending me emails — me! — as a Party fundraising concept. Pretty galling! It reminds me of this article of mine from about three years ago:

Feature image based on an image used under license from Freestock.com

Load more
Previous article
Your Tax Dollars… being pissed away: CBC advises women to pee outside like men
Next article
CTV News posts photo of Doug Ford with graffiti “L” on forehead, a moustache, and devil horns?