Coming from you, that means nothing… 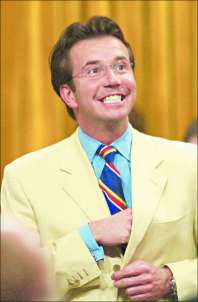 Joel recently blogged about Liberal Party leadership contender and Member of Parliament Scott (“Fancy Pants from Kings-Hants”) Brison saying “This is not only outrageous, it is dangerously duplicitous” in a “news story” in the “news”.

It looks as though Scott Brison is so hypocritical, he doesn’t even realize how stupid his remarks are. Us dumb social Neanderthals still seem to have memories…which is good for us, but bad for “Fancy, Schmancy Pants from Kings-Hants”

Let’s rewind the tape to see some of Scotty’s social progessiveness, shall we…

‘Well I’ve got something to tell you. I’m going to be the MP for a very, very long time, and you can kiss my ass.”

“I think you will be happier very soon…this week probably,” Mr. Brison said in the e-mail, which he released yesterday. Trading in income trusts spiked on the same day the government announced it would not place a punitive tax on trusts. The timing triggered an RCMP probe into the possibility that advance news of the government decision had somehow fuelled improper trading.

And some more social progessiveness…

Canadian homosexual activist member of parliament, Scott Brison, has been forced to apologize to Conservative Party leader Stephen Harper and the National Citizens Coalition. Brison admitted he lied in a release November 4 when he charged Harper with breaking federal lobbying laws while he was president of the NCC.

Because good old liberal-left fundamentalist and CP reporter Bruce Cheadle probably couldn’t locate a university professor in time to get his hack-job, slip-shod report to press, he balances Brison’s remarks with comment from a Marxist political genius. Apparently there were no social Neanderthals to interview.

NDP MP Libby Davies said the PMO note should have carried a different directive.
“What I would hope the message would be is to congratulate these two officers.”

Latest posts by Marc (see all)

Previous articleHandy Headlines for May 26 2006
Next articleA Teacher or a Jailer?