It’s the liberal-left’s state-owned, state-run CBC.  It’s on their “The Lens” series.  On Newsworld. It’s news!  So it must be one ‘o them “Canadian values” the liberals are always on about.

Checking the upcoming schedule for CBC TV asininity, and came across this gem which the CBC Newsworld—all news, all the time—channel (because nobody else in Canada but the state can do this newfangled “news” thang) is broadcasting next week:

Here’s a photo of what I guess we can expect to see.  It’s from the producer’s web site—but not included in the CBC.ca preview page about the documentary—which is a tad ironic since the big CBC series is called “The Lens”.

Judging from the photo of mostly naked homosexual chicks making it on a bed, I’m quite sure it’s within the CBC’s mandate.  [sarcasm: off]

It does seem to assent to the CBC’s apparently insatiable (pathological?) desire for showing you and your family full-on nudity and new forms of kinky sexual prowess, not unlike their Ball Waxer video in which they explained to our nation’s young set, through graphic video, how our nation’s young men can get their testicles waxed.  (If you didn’t know ball waxing was a “Canadian Value”, you don’t watch the state-owned state-run media enough). [And there’s much more CBC lewdness here].

The CBC.ca web site about the documentary opens with a quote from an academic in Toronto.

“I think bisexuals and bisexuality is quite invisible and it’s very likely that there are far more bisexuals out there than we know.  They may even be some kind of silent majority.”
– Corey Silverberg, Sex educator, Toronto

Yes you heard it here first, you dumb straight-laced Canadian clucks.  Bisexuals may even be the silent majority!  Again thats the majority.  Thank you CBC.  Newsworld. 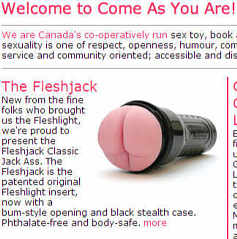 Since I was so surprised that I was suddenly in the minority, I looked up the CBC’s quotable information source, and found that the good Corey Silverberg is, among other more erudite things, the founder of a “worker co-operative” sex toy shop in Toronto.  That’s a glimpse of one of the typical offerings at his online store, at left.  No, I didn’t order that Fleshjack, um, thing, Mr. Silverberg, even if you are “proud to present the Fleshjack Classic Jack Ass. The Fleshjack is the patented original Fleshlight insert, now with a bum-style opening and black stealth case.” ($75—available in pink and clear, rush delivery available for you liberals in a hurry).

One of his partners, Gill Lamon, organized the national “Masturbate-a-Thon”.  That’s nuanced, huh?  Hey I wonder if there were some o’ them big old

There’s so much to learn about my Canada.  That’s why we need the CBC and Big Honkin’ Tits magazine.

Bisexual Virgins: Crossing the Line is a one-hour TV documentary filmed in Toronto that follows two young women, Tina Ames and Samantha Smith, as they finally break through their inhibitions to explore the world of bisexuality.

The film offers insights into the free-wheeling world of Toronto’s bisexual scene where two women, Tina and Sam, explore the complex issue of sex – they examine and act on their repressed sexual feelings to try and make the decision on their identity – are they heterosexual or are they bisexual?

“I’ve done the hot and heavy with men. It doesn’t interest me anymore. I’m looking for something more, something that’s deeper.”
– Sam Smith, 23, bi-curious

Oh thank God somebody in the media is finally exploring the world of gay sex.  It’s what’s missing in this country.  Thank God taxpayers pay in excess of one BILLION PER YEAR to the CBC to come up with this vital, essential service and essential product for me and my family.

The production was made by a private firm “in association with CBC Newsworld”.  Your tax dollars at work.

State-owned and state-run media should be banned in this country, and that notion enshrined in our constitution.