[2019 Edit: some or all links now non-functioning due to closure of CBC sites, etc]

When you have satellite TV and an internet connection, the sky’s the limit on the amount of depraved, lewd, grotesque, and pornographic material you can get your hands on. 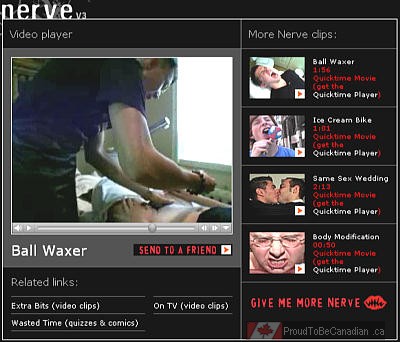 It’s not television and internet material that is produced by good conservative Canadians, I’m quite sure of that.

Some of the material at this site “Nerve” seems to promote a really depraved lifestyle—getting meat hooks installed in your back as a better form of piercing than, say, what the state-run CBC’s George Stroumboulopoulos has all over his face every day at 5:00 in the evening on the state-run news channel called CBC Newsworld.  All those piercings are just boring compared to this.

Other material here simply promotes a gay lifestyle and gay marriage and includes flicks about being transsexual, for example.  Some flicks shown here demonstrate various forms of just bizarre behavior, and manifestly attempts, it seems to me,  to “normalize” all these things—you know, the way liberals try to normalize lots of their behavior and lifestyle choices and what they call “values”.  You’ll remember Liberal Prime Minister Paul Martin constantly lecturing us about “Canadian values” and what they are.

I was surprised that this web site was actually part of the liberals’ prized CBC which we all pay for.  It and all its contents (sampled below) was bought and paid for and presented by—not some perverted, depraved socialist, and not some adult-only pay-per-view business—but by YOU.  Yes, you.  Pat yourself on the back.

The state-run CBC presents these videos—taken from their TV show, shown free of charge to our kids.  It is in fact a whole program designed to appeal to our nations’ teens, specifically.

Here are some of the flicks at the state-run CBC web site.  Did you know you bought this and that this is what our CBC is up to?

NOTE:  Click the links to see the whole flicks at the CBC.  In case they take them down, I’ve got copies of them.  Also, you’ll need the free Quicktime player installed on your computer to view them.

Young teen boy goes to a waxing parlour to get his balls waxed.  CBC camera man follows boy into parlour where the waxer asks him how often he shaves his balls.  He answers, “I guess I shave my balls about once a week…”.

He’s then asked to drops his pants, and he lies on the “operating” table.  All of this is captured by the astute CBC cameraman who is employed by the state with your tax dollars.

The waxer then proceeds to wax his balls while the CBC camera films the event for the youth of our country at taxpayers’ expense.

They hope you and your children learn some of those liberal “Canadian values” from this.

Shows a very sympathetic review of a gay “marriage”, from just prior to the big wedding between two very, very young men, through to the end when the presiding civil servant (?) pronounces that by the “power vested in me” they are “married”.  He then suggests they “may greet each other with a kiss”.

Which of course they do.

Shows a tattooed young man who goes to a skanky body-piercing parlour, and gets his back pierced—with giant meat hooks.  Then the CBC shows that man being hung like meat—from his new meat hooks which are pierced into his back—and swinging back and forth from those meat hooks, in a public bar of some kind.

The CBC thought this was good stuff to help normalize our youth to the values of getting giant meat hooks installed into your kids’ backs, then of course hanging like meat in rave bars.  Simple piercings in the eye-lids, nose, lips, tongue, nipples, and sex organs…. are simply passeé now.  The CBC news host George Stroumboulopoulos with all his face piercings is “lame” now by comparison.

Of course they glamorize it by making out like the vandals are actually earnest artists—you know, in that socialist hippy kind of way, and the overriding idea being promoted here with the sympathetic music in the background is that these vandals are actually doing our community a service.  The video is complete with the words “sh**” and “shi**y”.

They never show the faces of the young vandals while they vandalize our community, because the activity they’re being filmed doing is entirely illegal.  The CBC protected the vandals by hiding their identity.  CBC paid for it.  You paid for it.  Illegal activity.  In Canada.

Shows a zoomed-in clip of a dog’s balls.  Then the dog urinates against a fence, and that’s pretty much it.

The CBC cameraman is sure to zoom in very closely on the well-clipped dog’s testicles—the dog being a poodle-mix if I’m not mistaken.

I wonder if they will show an extreme close-up of a female dog’s vagina in an upcoming clip.  Then maybe move right onto humans.  Why the heck not?  We’re the “extreme” ones—not them.  Am I right Toronto Star readers and columnist?

This is what the state-run media thought Canadians should spend their money on this day.

Hope you liked it.

I’m sure some perverts did.

This flick is an excellent example for our youth.  It shows an early-teens girl wearing excessive makeup who’s clearly completely strung out on drugs, it seems to me, and between wild parties—perhaps at spring break.  She stupors along and spots the CBC microphone, and fantasizes about how it could “tickle” her.  Because it’s fuzzy.  And I guess the phallic shape has something to do with it.

I’m quite sure the words they inexplicably didn’t include were references to exactly where and how it could tickle her.  But you know, the CBC’s motto is “We report—you decide”.

So they left it at that.

A mid-teens girl who appears to me to be completely strung out on drugs talks about people who are all, you know, like “judgmental” and stuff.  Like yuck.

She says that judgmental people should “take that pickle right out of your ass”.

She then demonstrates how exactly that might actually look, if they were to pull a pickle out of their ass, as she turns around, and the CBC cameraman zooms in her said “ass” and the demonstration occurs.

She pushes a pencil through the front of her jeans and pulls it out the back, as if to portray a pickle being extracted from her ass.

A young mid-teens boy in a nearly full public parking lot—with people present—screeches like Howard Dean to the CBC camera, yelling that he doesn’t “believe in clothes”.

The CBC camera follows him running around the parking lot completely naked, often zoomed-in on his butt.

A CBC cameraman films as a black youth starts to “gangsta rap” a song, when inexplicably, the CBC cameraman—or someone off camera in any case—yells “Yo shi*, man, something just bit my fu**ing hand, dude.”

Of course the CBC caught the whole words—I didn’t like using them here.

The youth star doubles over in laughter.

Off-camera person repeats same line.  The camera zooms in on said hand, and he says again—“something’s biting my fu**ing hand”.

Hope you liked it.

You paid for it.

This one features a young adult who left the U.S.A., which they leave no doubt he absolutely thinks sucks (the U.S.A., that is).  He of course now lives in Canada, which surprise surprise, he loves immensely by comparison to that awful America.

He explains why he moved to Canada, eventually getting to the real zinger—the whole point—saying this illustrious comment:

This is a cartoon about an obviously very young male character who gets an erection in school class.  The female characters laugh at him.

The teacher in the classroom asks him to write something on the chalk board—but of course he has an erection.

He does as he’s told.

I can’t for the life of me understand why I paid for this.

But we all did.

The “Nerve” show was apparently yanked, as I can’t find it on the schedule any longer.  It was broadcast to the kids at 5:30 Mondays—ensuring that both teens and even the young toddlers could view it.  That 5:30 time slot on Mondays now appears to be filled by re-runs of Frasier —you know, the comparatively lily-white American show.  However the Nerve web site (http://www.cbc.ca/nerve/) is still active and accepts subscriptions for their newsletter.  I signed up naturally.

The state’s official television critic, Stephen Cole, wrote this about Nerve, on the state-run people’s web site, CBC.ca:
(at http://www.cbc.ca/arts/tv/nerve.html )

[…] There are probably parents and educators who wish that Nerve would stick to more traditional, obviously nutritional, kids programming — something like Reach for the Top, the legendary high-school quiz show that ran for nearly 20 years and appeared in almost precisely the same time slot as Nerve.

I would remind them that CBC finally cancelled Reach when audience research indicated the program wasn’t reaching its intended demographic, and that 57 per cent of the audience was 55 years of age and older. Nerve successfully reinvents the kids show by abandoning the instructional pose adopted by so many previous teen series. The show feels more like a visit from a friend than a meeting with an after-school tutor. […]

Stephen Harper was one of those suckhole brainiacs on that wholesome, boring old Reach for the Top show, back in the boring old stupid days.  Things have “progressed” nicely, haven’t they?