Comedic quote of the week—from a state comedian 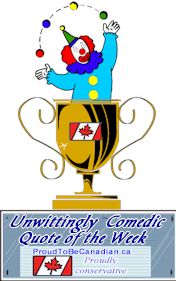 The award is a strange one this week and yes, I know, it hasn’t been awarded for at least six or eight weeks but there’s been so much comedy and drama the award judges were overwhelmed!  By the way, by way of reminder, we appoint the judges ourselves to fit our exacting criteria.  And miraculouly, they now choose the exact right award recipients, for exactly the right reasons, whatever our readership might think, or what our “rules” actually say.  It’s an activist panel!

She left out “…starting now…”.  Let’s see if we can help her out by applying it to the beginning or end of each of the story’s sentences or the headline.  In some cases, the words “…JUST KIDDING!” work better at the end of a sentence.

The chief justice of the Supreme Court says Parliament should not try to change the current process for appointing judges to Canada’s highest court.

Chief Justice Beverly McLachlin says the existing appointment process is working just fine and should not be politicized.

Currently, the Constitution gives the prime minister final say in naming justices to the high court.

McLachlin says that’s effective in maintaining public confidence that the courts are not political.

Previous article“Liberal media” to be renamed “Natural Media”
Next articleDepraved programming accessible to our nation’s kids; brought to you by…