It’s fair and balanced reporting in some sort of a parallel universe.  Journalism by way of wishful thinking.  Or for short you can call it just plan biased, and hideously so.  Shamelessly, even.

Catch this hideous mess-up caught by a Pennsylvania blogger named Bob at “either orr”.  (Hat tip to DC In YOW)

I used my own screen captures of actual news items to exemplify it a bit.

Seems the liberal media deems it completely appropriate, in their “news stories”,  to call the Liberal Party of Canada…. “Canada’s natural governing party”.

Or at least some media does.  Others caught it and changed the wording.  Some left it and think it’s perfectly acceptable.

The story was written by Bruce Cheadle of Canadian Press and it seems it was picked up in various newspapers and media sources, as is always the case with Canadian Press “news stories”.

Here’s the Canadian Press version, as I screen captured it at Yahoo.ca

And here’s a corrected version, after a more moderate editor (Toronto Star reader and columnist tip: that’s as opposed to an “extreme” editor) caught it and changed “Canada’s natural governing party” to “The Liberal party”, at Cnews. 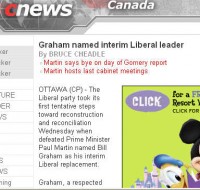 It really isn’t a simple matter of either/or.