CBC demonstrates how anti-Canadian it is, just now

A foreigner and aging has-been failed punk rocker from Ireland slams our country, which is one of the most generous countries on earth —live on the state-run media, the CBC, just now.  Apparently it’s “news” because it was on “Newsworld”.  And very important that we damn well hear it.

A CBC anchor “man” (named Andrew something) simply encourages him along in the “interview”—which was in actual fact not an “interview” by any stretch of the imagination.  The anchor simply allowed him—a failed pop band nobody—to lecture us and filibuster for about 7 minutes non-stop about how Canada is failing in its international commitments—which is an outright lie—but the anchor doesn’t care about that—he encourages it.  When the anchor finally broke in with a question, it was the world’s fluffiest softball—even by CBC-on-liberal standards:  “So why do you think that is?”, he asked the brilliant Bob Geldof, and then let him go on for another five minutes with his “answer”, which was of course (and as fully expected by the anchor) nothing more than more slamming of our country —all while the anchor sits there on his butt.

The genius professor and international situations expert Bob Geldof then informed us that they (him and the other genius, “Bono”) will be playing a Beatles song (with the words “Boy, you’re going to carry that weight a long time”) dedicated to our Prime Minister Stephen Harper, which is of course designed to insult him on the international stage, implicitly, and on a personal level.  I’m sure the CBC will carry it live.

Personally, I’m on Canada’s side. The CBC should wise-up.  Then it should be banned. 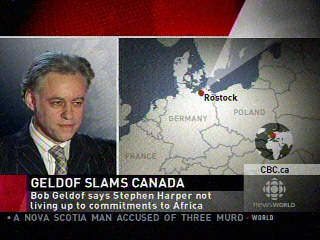 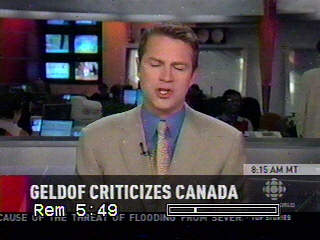