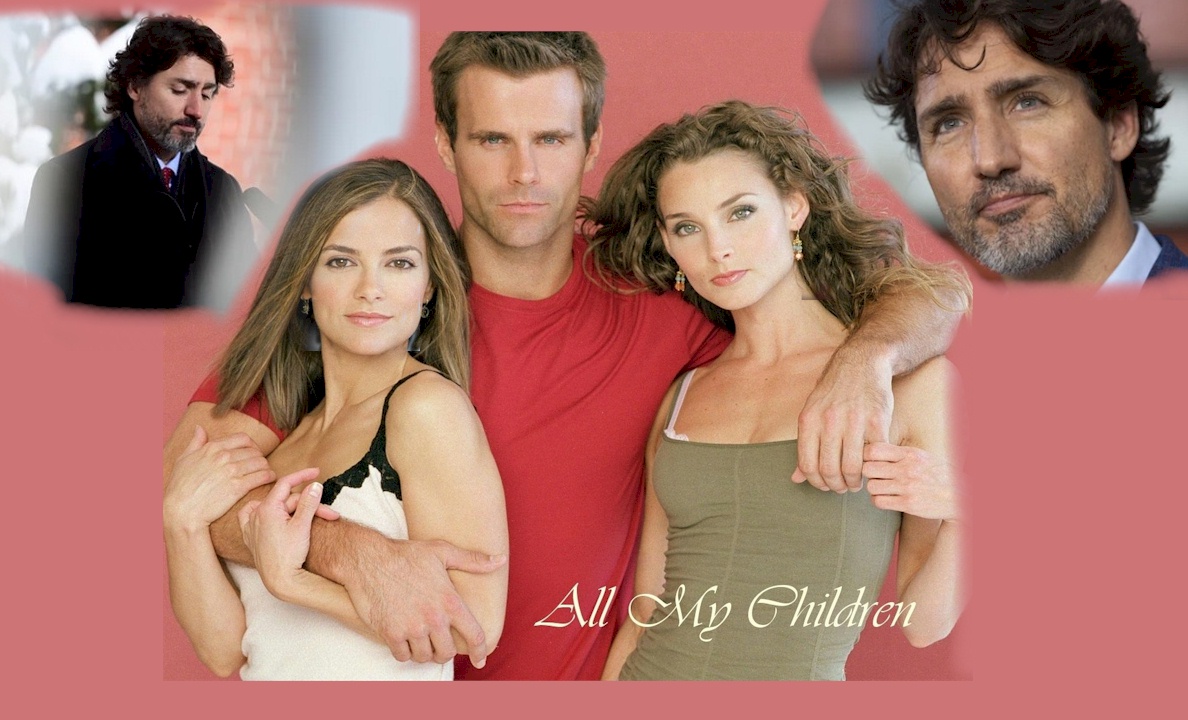 Polling shows the Liberals ahead in Canada. This should make no sense even to a Liberal. But does it?

There have been more than enough scandals and failures by Trudeau and his (oh I get to legitimately use some of the words news media writers falsely use to describe conservatives and Americans now!) benighted, hapless Liberals.

So there are those who are stymied and earnestly ask questions framed like this in today’s National Post: 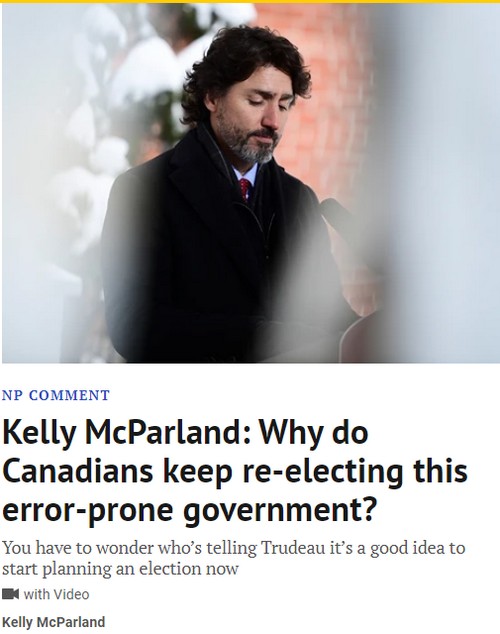 “It’s not even necessary to provide details; they’re so familiar people recognize them in shorthand,” he goes on. But that’s where he’s wrong. People aren’t really that familiar with these things at all. When I have to talk to a Liberal because I must (pace our Ann Coulter), either they’re really good actors (and I wouldn’t doubt that —it’s a liberal thing) or they are really good liars (again maybe…), because they don’t seem to have the foggiest idea why I wouldn’t vote Liberal. Each time, I have to repeat that good Kelly McParland list, and explain why each failure is more impeachable than the last.

Sure the stories have been in the news media, they’ll say. And they’re right. Deceptive, but right. They’re in the news for a day or two. Enough for the media to claim they did report it, and fans to point at it, but we all know it’s a lark. And other stories aren’t ever told.

So let’s delve once again.

Look at the very display of the article by Kelly McParland as seen above. It’s accompanied, as is almost always the case in any news story about Canada (never mind Trudeau), with another giant, snazzy shot of… Justin Trudeau, as if taken by a lover, or as if it’s an ad for The Bachelor, or it’s some idiotic soap opera ad —complete with the “fog” drama. Trudeau could commit murder, and they’d have some thoughtful-looking glam shot of him accompanying the story (coverage of which would be over in two days).

Here’s a photo in an article about some polling done last year — and the text below it: 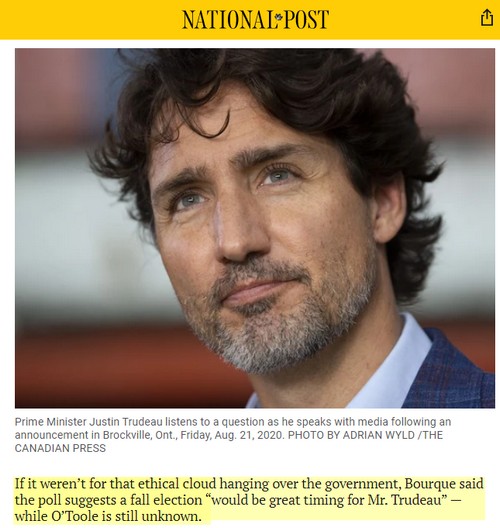 Could they get a closer, more pensive-looking shot? Or squeeze a bigger one in there?

Did we not know what Trudeau looks like? Personally, so much so that I can’t look at another one. I turn my gaze away in reflex. Yet this is what we get in every paper, 13 times every day. It’s a classic marketing technique. There’s no mystery here.

Most people don’t know who Erin O’Toole is and couldn’t pick him out of a police lineup even if it were him who committed murder. From that polling article: “The poll also suggests O’Toole, newly crowned Conservative leader, is an unknown quantity for a majority of Canadians.” Golly. Shocka. And leads to “begging the question.”

Kelly McParland gives it a shot:

The point is that the news media is controlling the narrative. To their liking. And their liking is Trudeau. Liberalism. Wokeness. Progressivism. Full stop.

So it makes perfect sense to Liberals that they are ahead in the polls. That this is so confusing and confounding to Conservatives speaks to an embarrassing naivety or something worse —that they’re benighted on this point. Hapless.