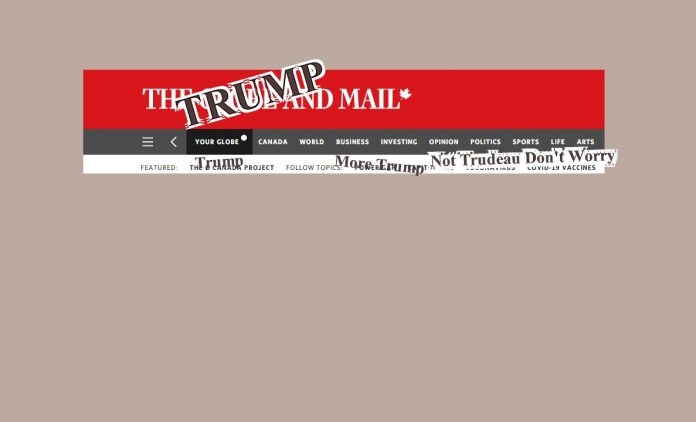 Columnists and reporters, especially at the Globe and Mail, have, for the past four years anyway, focussed on their political nemesis, Donald Trump; shunting only the very most shambolic scandals in Canada onto their pages when absolutely necessary. Stories about Canada, and Justin Trudeau (except to plaster his mug on their pages thirteen times per day for some reason) are dwarfed in number or at least on the righteous indignation meter (or metre, as they’d type it), and certainly on the headline shriek!!! and click-bate score.

Even after Donald Trump helicoptered away (“Witless Ape Rides Helicopter,” as Kevin D. Williamson so elegantly put it in National Review — you can only imagine what liberals thought), they still tried to blame him for, well, whatever the DNC, MSNBC, CNN, professors, and other such objective luminaries told them to blame him for in preparation for that Biden Smooth-Ride.

So when I saw Andrew Coyne’s column today, I thought, barf, here we go again. G&M columnists are still at it, they can’t let go. And Coyne was still at it, sort of. Watch!

“In the U.S., the media are full of fury at the sluggish pace of the country’s vaccination rollout. Headlines describe it as a “debacle,” a “disaster,” even a “total disaster,” and why not? As of Thursday, just 36 million doses had been distributed nationwide, of which 17.2 million had been administered, i.e. injected into people’s arms. It’s another in the long list of cockups attributable to the benighted Trump administration, which appears, unbelievably, to have had no plan at all for –”

Then it takes a turn. Well now I’ve ruined his whole schtick. Oh well. Read on.

“Er, hang on. Thirty-six million doses delivered, you say? Seventeen million administered? Compare these to the corresponding figures for Canada, where fewer than one million doses have been distributed, and just over 700,000 administered. Per capita, the United States has distributed – under Donald Trump, let us remember – more than four times as many doses as Canada, and administered nearly three times as many: five doses per 100 population, to our 1.8. If the U.S. vaccination program is a disaster, what are we to call Canada’s? …”

They always say “let history be the judge…” but it’s like without Trump to legitimately (or even farcically, as has been the case) kick around anymore (two full days of history later!), and without him to blame for e.v.e.r.y.t.h.i.n.g., and without him to simply make shit up aboutsky, an LED light came on. Oh! we’re even worse!

One can only wish they’d have realized that, well, at least before the last election. Or admitted to it.

I’ve been on this Canada is in in 19th place on vaccines thing for a while, but good of Coyne to take a look at something here in Canada other than Trrrumpp, now that it’s too late to do anything about our Trudeaupian vaccine crisis here.

And journalistically, or humanistically, too bad Coyne couldn’t see fit to admit that Trump — for all his massive number of true faults — actually did something good too. I mean here Coyne is admitting that Trump did something three or four times better than their beloved magic-man, Justin Trudeau. But nope. Can’t do that. The U.S. is bad ’cause Trump, but we’re worse. So, everybody’s bad!

After opening with “In the U.S., the media are full of fury at the sluggish pace of the country’s vaccination rollout. Headlines describe it as a “debacle,” a “disaster,” even a “total disaster,” and why not?” —Coyne later laments: “The Trudeau government’s defence of this dreadful record has been a series of shrugs, excuses and deflections.” This, while he acknowledges “two levels of governments share responsibility for thousands of needless deaths.” But here in Canada? No “debacle.” Nope. No. “disaster.” No, no. No “total disaster.” None of that. Why not here, I ask, but Coyne doesn’t.

Welcome to Canada, Mr. Coyne. Who’s been the real, what did you call Trump, “benighted” one?