A hapless choice of words and sentiment 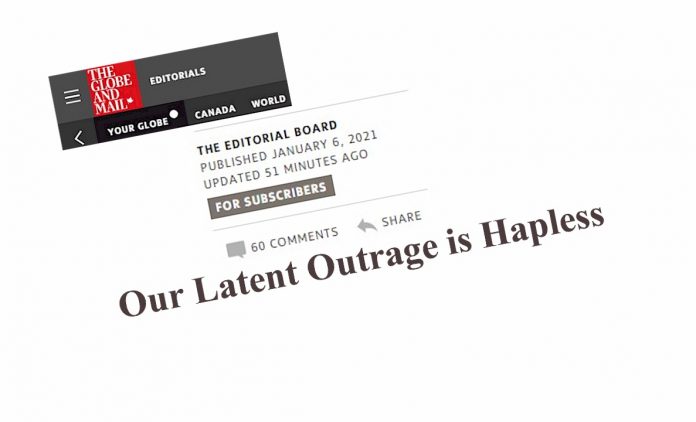 Yesterday I penned a too-long article (I was outraged!) on the crappy big-government vaccination operation, which is but its latest collective failure. Today, lots of news or “news” media are joining my bandwagon (not on purpose; they are obviously oblivious to my article because they seem to only join whatever is the group-think lefty outrage du jour from the NYT and WaPo).

But even though the likes of the Globe and Mail editorial board totally agree (if unwittingly) with my assessments, unlike me they manage to come off sounding like smug, arrogant, Canadian twits, in their editorial today. To wit:

“Canada’s vaccination pace is even behind the hapless Americans.”

Wow Canada is behind “even” them, huh? Those “hapless,” wretched, piteous, pitiful, American idiots. Vocabulary.com: 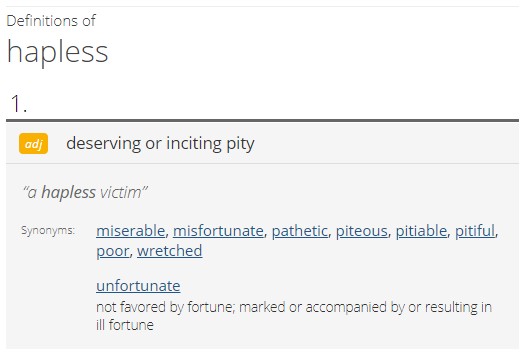 It’s a wonder they didn’t mention how Canada is also behind the possibly “hapless” Israel, which is leading the world in vaccinations. Or the far less “hapless” Germans (less “hapless” only because they sometimes come out against Trump and the “hapless” Americans on global issues).

Perhaps the most galling statement is this one though, from the daily, constantly, permanently, outlandishly, extremely, and actually hilariously outraged at America (especially Donald Trump) Globe and Mail, which, every single day, has a long list of articles and columns expressing their Total Outrage at America and most especially Trump (and when they run out of deep anti-Donald Trump think pieces, it’s “Ivanka for president? Now that’s worrying!“),

the extent to which it almost completely dominates their newspaper — a newspaper which seems to put actual “news” in third or fourth place behind opinions on Being Outraged At Trump/America (or their huge overbaked emphasis on “climate change,” which you can’t help but see, right above their ads for the new Ford F-150 and clickbait car reviews of the latest V-8-powered SUVs or hot Porsche on the market):

“So the holidays gave Canadians the gift of outrage. And while the outrage is justified, it doesn’t get at the most outrageous part of Canada’s COVID-19 failures.”

It’s a funny thing to write (well, funny in that smug and arrogant with a dash of hypocrisy way, while also being stunningly elitist, patronizing, disrespectful, and demeaning toward average Canadians who apparently so cherish this grand “gift of outrage” that they have so yearned for, and which the G&M betters have deigned to be “justified”). Especially since the article is premised on the fact that those nasty politicians who chose to vacation while telling us not to, is not the real big outrage story in Canada today — a story they’ve been missing, purposely or otherwise, since the COVID-19 pandemic started (mostly because they’ve been on about their outrage at Donald Trump and America all this time).

Nonetheless, better eleven months late than never (is it still “news” then? —Narrator), they do get to the nut of the matter:

“The mounting toll of illness and economic hurt is not primarily the product of what MPs, MLAs and MPPs are doing in their off-hours. Canada’s main problem is what governments are doing, or failing to do, when they are on the job.”

What, I ask, was their first clue to this government ineptitude that I’ve been on about for 25 years? Where were they, I wonder, when Justin Trudeau and his hideously wrong-on-every-issue health advisors literally allowed this China-spawned virus into our country, citing “racism” as the reason for not closing the borders, and telling us masks were worse than useless, and Trudeau joining a Black Lives Matters protest right in the middle of it, and performatively taking a knee which was literally celebrated by the news media as heroic and the proper thing to do, but don’t you dare visit grandma?

It’s like they suddenly woke up from being woke, and saw the actual light. Or they finally read my numerous articles on this exact thing. (Likely the former —wink!)  It’s really quite remarkable:

“Canada’s pandemic response, at both the provincial and federal level, has consistently been marked by a strange passivity, even indifference.

“Take the border. Preventing the introduction of new cases from abroad has always been among the issues that Canada must tackle – as proved by the success of countries from Australia to South Korea to Taiwan. If Canada can ever get its infection rate down, the border will become the key line of defence. It already is, given the need to minimize the introduction of new variants of the virus.

“But Canada has for the better part of a year run border pandemic security on the honour system … The Trudeau government’s policy at the border has been don’t ask, don’t tell, don’t worry.”

First of all, I spell it “defense” and “honor,” but then I don’t have a pathological hatred toward any “hapless” Americans, and I’m not outraged by their sensible spelling. But secondly, welcome, Globe and Mail editors, to what you would obviously agree is a far more “hapless” Canadian club, where we have to plead for and import life-saving vaccines from America, of all places, to save our very lives, and to save our country from ruin; and we have to import masks from China, of all places, to help prevent the disease which started in China and was allowed into Canada by idiot Canadian politicians; and where our major newspapers have to rely on bogymen like America and American President Trump to placate our need for “outrage” clickbait and a news media’s very income and survival, rather than on our own idiot politicians and worse-than-useless governments and their massive failures which have been truly, historically, outrageous.