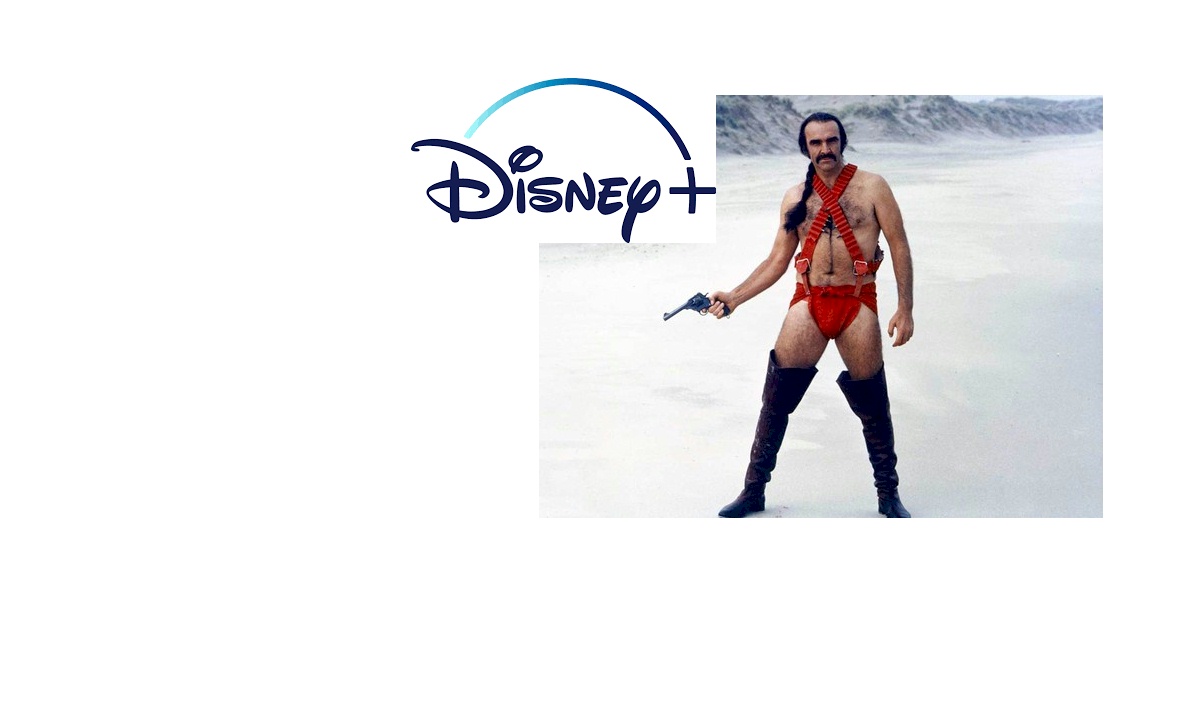 “Dropping 500 new movies?” So… churning out crap like poop out of a cow’s butt, if I understand correctly.

And if that headline about Sean Connery in a “mankini,” complete with the gross photo, isn’t enough of a reason to drop Disney+, there are at least 500 others. Here’s one: Their cancelling of one of their stars, Gina Carano, literally for being even marginally conservative-tolerant and therefore, to their minds, a despicable deplorable.

The Disney folks are apparently intolerant bigots and woke idiots. (Add them to the list.)

I think dropping Disney+ from my cable line-up would be one of the 500 companies I deal with that I could easily drop, while at the same time helping preserve freedom and democracy, fighting back against woke left-wing idiots, and saving my cash for more worthy causes like throwing it out the window and watching it fall to the ground. (Plus, or “+” — I would get to watch less idiotic TV, thereby not turning into a total moron.)

Apparently you have to be like James Bond to figure out how to drop Disney though, once you’ve been suckered into signing up (although you can probably do it even while not wearing a “mankini” like a Village People macho, macho man). It’s so difficult to cancel that there are several articles written about how to do it, aside from Disney+’s own explanation. Here are some other tips which are apparently required to do what should be a simple task but isn’t for some odd reason having nothing to do with scamming the crap out of you by purposely making it difficult to get out of paying them their exorbitant monthly fees:

And there are any number of videos helping you get through it. Best you don’t even sign-up, obviously. (Reminds me of canceling the Globe and Mail, where they force you to call them on the phone so they can badger you into staying on — “To cancel your Globe Unlimited subscription, please contact our Customer Care team at: 1-855-813-6111″— but you can’t understand a word they’re saying and then they hang up on you, long story, suffice it to say I eventually cancelled by way of stern emails from me. Others have similar problems with canceling G&M.)

Canceled from The Mandalorian, and then fired by her own talent agency, and then Hasbro cancelled her Mandalorian toys as if to pile-on like all bully progressive leftist pile-ons these days, Gina Carano has now been hired by Ben Shapiro, of all people, to work on future movie releases, following the success of Shapiro’s first movie venture, “Run Hide Fight.” She will work on other new movies that also don’t push an anti-conservative left-wing woke idiot agenda. Which should be extremely refreshing. I urge you to support this effort. 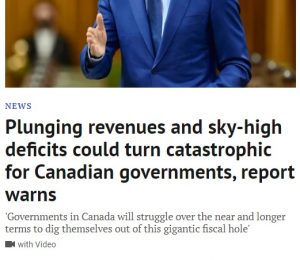 We didn’t need a report to explain that governments are spending like there’s no tomorrow (and some leftists and other greenies do actually believe there is literally no tomorrow, so that may explain that). But what the hell, thanks for the eightieth report on this obvious government failure of massive, historic proportion (eclipsing even their Covid and lockdown failures). Also see the running tally at the right side of every page on this web site, with the national debt read-out.

(I may have mentioned this sort of thing before).

File this under D for duh… “D” also coincidentally being the grade that teachers get. Or at least the militantly, extremists, radically left-wing — sometimes, I believe, marginally if not absolutely, Marxist — teachers’ unions.

No file it under F, and U get to guess what F stands for.

Teachers unions have declared war against conservatives, parents, families, Christians, capitalism, freedom, Canadian traditions, our heritage, and our democracy writ large. That’s a broad statement, but you know it’s true if you’re honest. Especially if you have a child attending one of the state indoctrination centers controlled by the teachers unions.

I think it’s time to fight back. Wear a “mankini” while giving them what for, and they’ll think you’re “diverse” and might listen to you for more than two seconds.

Cruz is an idiot for doing this, based on what we know. But the good thing is that no Democrats, liberals, progressives, or leftists of any kind have ever, are not now, nor will they ever do such a stupid thing. It’s only Republicans that do this. That’s a fact. (As reported in mainstream media). 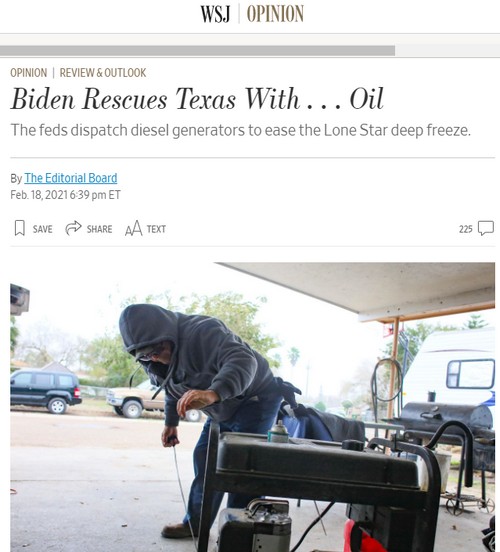 Another We Warned You moment. (How many of these do we need?)

Next thing you know, I’ll be having to warn greenies about solar panels not working in the dark of night, under cloudy skies, or in the shade.

Turns out wind turbines don’t always work — even in Texas where the global warming is causing freezing temperatures just to confuse you all about the “science” of global, um, warming — and so sometimes you need good ol’ gas and oil to provider for, you know, life. Luckily Texas has some.

“With Texans shivering as power outages continue for a fourth day, the Biden Administration announced it is deploying diesel generators to the state. Yes, good ol’ dirty diesel fuel is coming to the rescue again.

“The left’s denialism that the failure of wind power played a starring role in Texas’s catastrophic power outage has been remarkable. Liberals blame gas plants for not covering wind’s you-know-what when turbines froze amid surging demand. This is ironic since they seem to be acknowledging that fossil fuels are necessary, though they still want to banish them…”

And when you delve into the matter, at the root of it, you find progressives’ federal tax subsidies and other such goodies which implore states and utility companies to deploy these “green” modes of energy, while abandoning trusty oil and gas because they are taxed and burdened by copious “green” regulations.

Actual top headline at RT.com, the state-controlled international television network funded by the Russian government: “Texas disaster is what happens when you DON’T pursue a Green New Deal – AOC.”  The Chinese are also in favor of AOC’s lunacy, no doubt. Get a clue, people.

At least maybe this weather ‘n government disaster will help keep progressives from moving to Texas as they have been in droves, abandoning their progressive high-priced, high-taxed, high regulated, speech-controlled, homelessness havens, and gun-controlled “Utopias,” California and New York and such.

“National Post must be cancelled. Enough is enough. Racists.” —Erin O’Toole, Conservative Party leader. (OK this is just what I imagine him having to say, in order to be consistent and not hypocritical).

You’ll remember O’Toole, leader of the Conservatives (or rather, the “Conservatives”), the guy who promised to stand up for freedom of speech and you know like whatevers before he got enough votes to take over the party. He fired former leadership candidate and current MP Derek Sloan for, well, being “right-wing,” and for questioning the national loyalty of certain federal health officials. Like asking aloud who’s side they are on, China’s or Canada’s, didn’t occur to anybody else. Much was made of it. O’Toole was extremely righteous and haughty about it. It made me sick. Not China Virus sick, but sick. 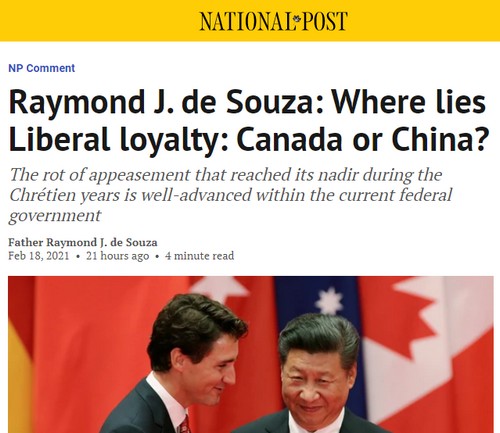 Soon we’ll have to fire O’Toole for being on China’s side.