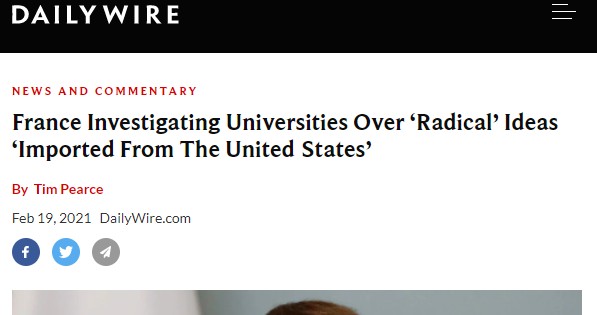 The Daily Wire has the story you won’t read in most media, because, well, read the story, then it’s obvious why.

The gist of it is that French President Emmanuel Macron has warned his countrymen of “certain social science theories entirely imported from the United States,” and his education department is calling for a probe to stop it.

Macron and his left-wing government is specifically calling out the pro-leftist/Islamist teachings that prevail in some American university settings (spoiler for the French: it’s rampant at almost every university in all of North America). That’s what their probe will start on, but I suspect when they visit a few universities, they’re going to freak out at what’s going on, and wonder what, for example, is this fresh new hell called “Critical Race Theory?” Expect to read the word “merde” a lot in the report.

I also suspect they’ll choke on their escargots when they see the now almost total lack of freedom of speech suffered by anyone who isn’t a woke leftist or Marxist. They won’t want to import that merde either.

At the U.K.’s DailyMail.co.uk:

“Historian Pierre-André Taguieff argued in the same way that the ‘American-style black question’ was a ‘totally artificial importation’ to France.

“He said that it was all driven by ‘hatred of the West, as a white civilization’.

“‘The common agenda of these enemies of European civilization can be summed up in three words: decolonize, demasculate, de-Europeanize,’ Taguieff said.

“‘Straight white male — that’s the culprit to condemn and the enemy to eliminate.'”

Over at the Radio France International (RFI) website a French official is quoted about this, saying, “What you notice in universities is that there is a minority of people who use their academic aura and qualifications…to advance radical or militant ideas.” The minority he’s referring to is in France, of course, because in North America, leftist woke speech and teaching codes are universally mandated and enforced upon all professors, students, and staff.

Too bad the media here won’t cover this story, because it would be a useful waker-upper for many, and it would shed light on just how extreme and radical left-wing and wokeidiot the North American education system has become. I mean when a socialist European leader — from France — and his lefty government colleagues are concerned about it leaking into France — France — and wrecking the place, minds here would likely be opened. Ohh that’s why…