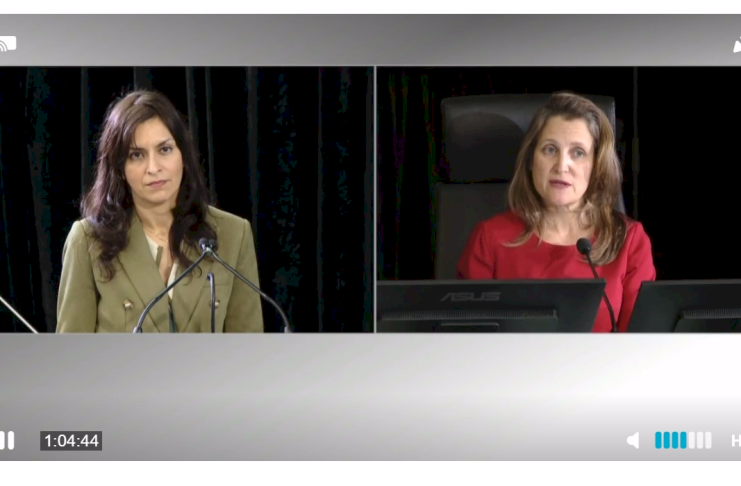 After evidence yesterday showed two cabinet ministers blithely discussing the use of Canadian Armed Forces and its army tanks (seriously!) to quash the freedom convoy (the convoy being Canadians, in Canada), today Chrystia Freeland is on the witness stand.

As a part of her 8,000,000,000,000 words spoken so far today at an extremely slow pace — sorry, add at least six more zeros — while trying to explain her and her cabinet partners’ complicated calculations regarding the freedom convoy (and their use of tanks, I presume, for example), she explains that we little people have to understand: “We were operating in a fog of war.”

No word on NATO involvement. NATO Article 5 suggests that all of the European and U.S. NATO members and their military might also have sent support in the form of tanks, in addition to air support.

“We were operating in a fog of war.” No wonder they were talking about using tanks. This explains so much. Explains it, albeit verry slowly, and with so many extraneous words and spaces between and surrounding them. The talk quickly turned back to the use of tow trucks, rather than, say, F-35s from the U.S. or Europe, to end the “war.”

To say she is loquacious and slow-speaking is to understate how utterly boring she is. She speaks as if she has a pathological compulsion to verbally elucidate on her stream of consciousness. Solipsistic turned up to eleven. And she does this as if we’d be interested in it. Which we are not.

SIDEBAR: Yesterday we also saw where Justice Minister and Attorney-General Lametti was making a “joke” about former Ottawa chief of police Peter Sloly, using Sloly’s name as the humor tee. He texted his ministerial pals that in juxtaposition to his apparently hilarious name, Sloly (i.e., the police) should move on these freedom blighters like “quick quick quick.” I imagine every time Freeland speaks in the cabinet room his texting fingers must be rapid-firing this “joke” all day long. In Lametti’s defense, in trying to explain his “joke,” he said it was actually in reference to his favorite movie, Love Actually, which as most of us know, is a chick flick. Humor, in “a fog of war,” is important, y’all. Just like humor is important when speaking of using tanks to blow the crap out of Canadians, in Canada. Or politicians directing the police as to their actions.

And by the way, I’ve recalculated the number of words she has spoken: it isn’t 8,000,000,000,000 words (plus perhaps 6 more zeros) as I said before. It was 127 words in total. It’s just that she puts so much time between every word. Joel Johannesen regrets the error and the confusion and distress if may have caused, and promises to do better.

I will update as necessary. I nap between her words, so it may take a while.

UPDATE: In answer to a simple question from a civil rights lawyer: “Let me be very precise about my state of mind…” before going on a long rant about her feelings. It’s her thing. She runs out the clock doing this, which (call me Machiavellian — or call her that) is part of her modus operandi.

UPDATE 2: After being asked by the cross-examining lawyer for the convoy if she considered members of the organizers of the freedom convoy “terrorists,” Freeland went on a long slow instruction to the world about how she is not in a position to determine that, as Finance Minister. (I think this is the only thing I agree with her about.) Immediately after that, the lawyer pops up one of her handwritten notes (written like she’s upside down or in outer space or something — this is the handwriting of a, well, let’s just say she has atrocious penmanship. Or penwomanship, as I’m sure she would call it, because social justice or something.). The note is written to “Dave,” but she adamantly refuses to acknowledge that “Dave” is David Lametti, Attorney-General, and Minister of Justice. It could be any other Dave who is in charge of designating who is and who is not a “terrorist!” The note is this, which I screen-capped because I didn’t want to forget the delightful moment:

“You need to designate this group as a terrorist group,” she writes as if a cabinet-level expert in who is, and who isn’t a terrorist.

You can’t make this stuff up.

Load more
Previous article
Woke cult was festering at Twitter before Musk takeover, in shocking, shocking news
Next article
Obi-Wan Kenobi did not come from Saskatchewan.