Today at the commission investigating the Trudeau Liberals’ invocation of the Emergencies Act: We found that Liberal Justice Minister and Attorney General David Lametti brought up using the Emergencies Act on January 30 — a day or two after the freedom convoy started. That was fast. But you can’t take any chances with people who oppose the Liberals. Could catch on, dontchaknow.

But more importantly, we saw texts between Liberal cabinet ministers Mendicino and Lammetti presented as evidence where the ministers considered using the Canadian Armed Forces and its military tanks against the protesters. Against Canadians. In Canadian streets. In Canada.

Seriously. We did not make this up.

When the Chinese Communist Party demonstrably interferes in Canadian elections, trying to subvert our democracy (and reportedly succeeding to some extent) in their effort to elect a Liberal government instead of a Conservative one, the Trudeau Liberals utterly ignore actual security and intelligence information about it, or they cover it up. Not a threat. No need for press releases, no alarm bells need be rung; don’t even tweet about it in your 50 daily tweets about all your glorious accomplishments. Certainly, take no discernable action of any kind whatsoever.

When Canada is being attacked by Communist Chinese, national defense is not even on the radar. When liberals and their agenda are criticized, military defense is immediately top of mind to Liberals. Tanks.

Tanks — in case you’re stupid — are used in wartime to blast the enemy with high-powered cannon or missile fire, machine gun fire, or by launching a barrage of automatic grenade fire using grenade launchers, resulting in scores of deaths, and leading to the complete annihilation of the enemy. Death is caused by the massive explosive blast felt for several hundred meters around, or by the enemy being burned alive in the hellfire. Military tanks are also used to literally squish the enemy by running over the enemy, and to wreck the enemy’s weaponry or equipment — weaponry and equipment, in this case, being bouncy castles and hot tubs and illegally parked trucks. Enemies being Canadian citizens — in Canada — protesting Trudeau’s policies. In Canada. On Canadian streets. Seriously. We did not make this up.

“MM is Marco Mendicino, Minister of Public Safety. “CAF” stands for Canadian Armed Forces. “Anita” is the denfence Minister Anita Arnand. This is between Mendicino and Lametti. 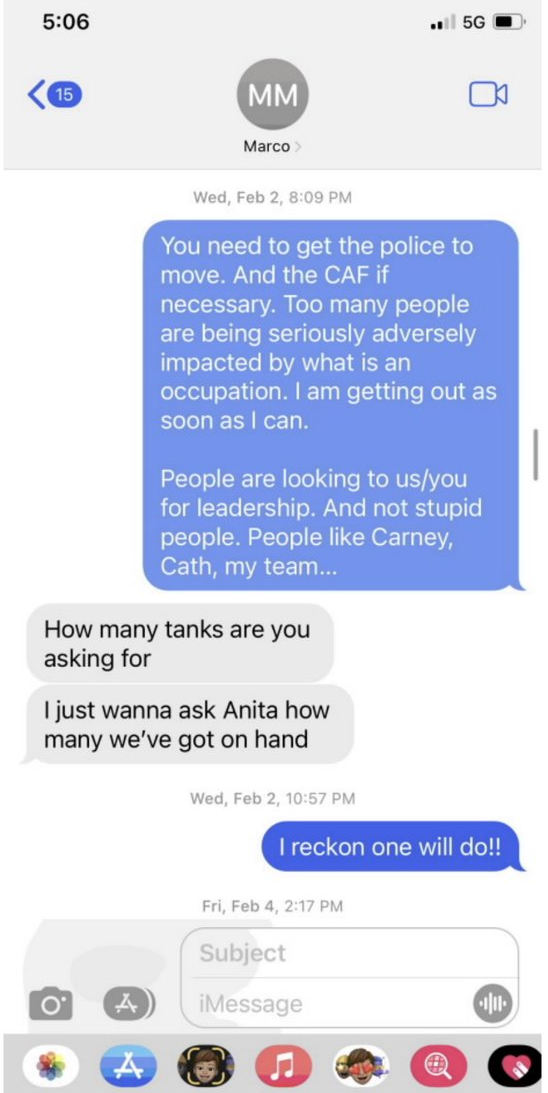 So casual are they in discussing the use of tanks that have the potential to annihilate Canadians, Mendicino says “I just wanna ask Anita how many we’ve got on hand.”

Wanna. Anita. They’re discussing using tanks, which as I’ve said, are designed to kill mass numbers of one’s enemy, and he uses girl-child verbiage like “wanna” and refers to the Minister of Defence as “Anita.” Lametti answers jovially, “I reckon one will do!!” using double exclamation points at the end like a teen texting his or her girlfriend might do.

And “I reckon” he’s right that one tank being used against Canadian citizens in Canada… will do just fine.

The Canadian government website describes our military tanks as follows:

…These heavy-armoured and highly protected vehicles provide a tactical advantage in the form of mobility, firepower, and survivability, and are used to provide direct fire support on the battlefield.

“The battlefield” in this case would be Canada, and again, the enemy is Canadians. Just so we’re clear.

Various models of the Canadian military’s Leopard tank have various weapons capabilities: Any one tank with any one of these weapons could kill hundreds of Freedom Convoy protesters easily and quickly. Luckily, each tank has several weapons that can be used to kill Canadians. We don’t know which model “Anita” would have chosen to send.

Liberalvision CTV, which routinely runs defense for Trudeau and his party (particularly as regards the freedom convoy — I really think they think this is their role in Canadian society), reported that what Lametti texted was merely him “being humorous.” Because it’s f-ing hilarious for two ministers of the crown to joke about using military tanks to kill or in some other way quash Canadian protests. Make a joke about “sticking to your knitting” and you’re a “national disgrace,” you obviously “hate women,” and your career is over.

Here’s CTV’s big take after the revelation of a discussion about tanks being used against Canadians: 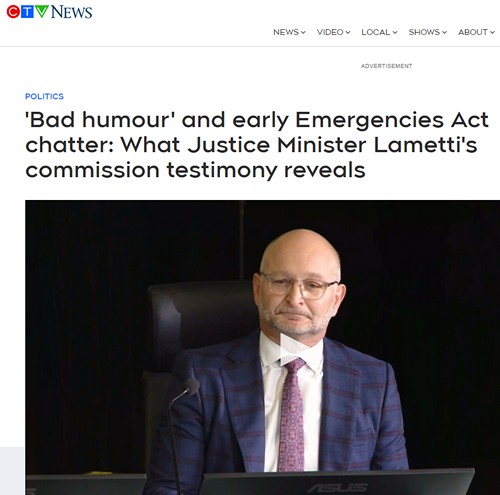 CTV then goes on to reveal literally nothing about what was really revealed.

What I see is not a joke, or humor, but rather, contempt for certain Canadians, irresponsible language for a minister at a time of what we were to believe was a “crisis” (obviously it wasn’t anything like a crisis if they’re simply joking around about it), and horribly irresponsible use of government resources and property. At best, this is grotesque, sophomoric ministerial misbehavior of the worst kind. At worst, it was something, well, egregious, dangerous, and threatening to our democracy. That’s what was revealed, CTV, in case that helps.

The Liberals’ Globe and Mail division at least noticed it too: 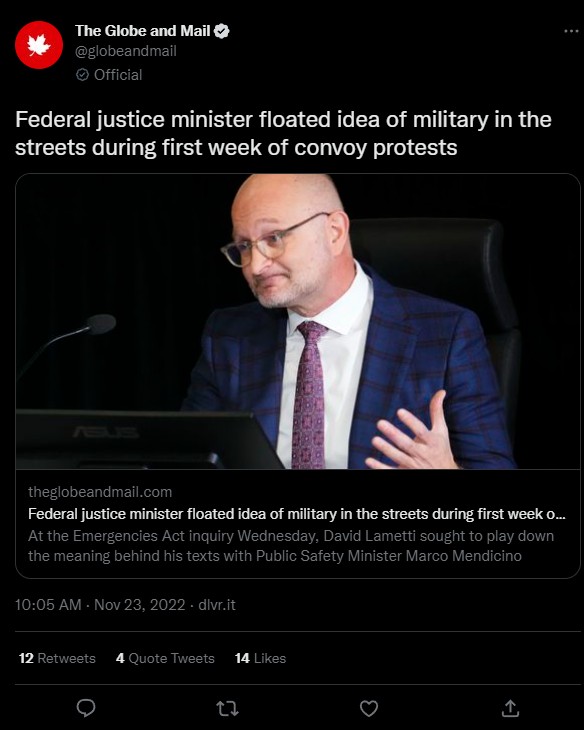 But then they quickly published a calming article for their Trudeau fanboys and girls:

In a sane country — a serious country — these ministers would resign immediately. A serious commission would be held to call to account the Trudeau Liberal government whose ministers casually banter about using the Canadian military and its tanks against Canadians. In Canada. On Canadian streets. And then the prime minister would obviously be expected to resign — and he would — because the buck stops with him, and oh yeah, this is a free country and a democracy with actual rule of law and due process, all of which they failed to protect.

But this is Canada. And this will not happen. And most of the “news” media will not question even one Liberal about this scandal. They will run to their defense. That, to liberals and Liberals, is what THEY mean by “national defense.”

I did not make this up.

Previous article
Trudeau Liberals thought they were a monarchy in the year 1432
Next article
Woke cult was festering at Twitter before Musk takeover, in shocking, shocking news