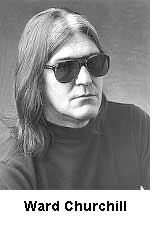 Readers (Frogg and Marc) passed-on another Ward Churchill revelation.  This is an article by Paul Campos  of the Rocky Mountain News again, but Campos uncovers new ground here.

The deeper one digs into the Ward Churchill scandal, the more amazing the story becomes.

Academic freedom must be protected, which is why I’m continuing to write about this matter. A version of academic freedom that protects Churchill from appropriate sanctions isn’t sustainable either as a political or an ethical matter.

Consider: Churchill has constructed his entire academic career around the claim that he is a Native American, yet it turns out there is no evidence, other than his own statements, that this is the case.

Churchill has said at various times that he is either one-sixteenth or three-sixteenths Cherokee, yet genealogical reporting by the Rocky Mountain News and others has failed to turn up any Cherokee ancestors – or any other Native Americans – in Churchill’s family tree.

Why should we care one way or another? We should care because Churchill has used his supposed Indian heritage to bully his way into academia. Indeed Churchill lacks what are normally considered the minimum requirements for a tenure-track job at a research university: he never earned a doctorate, and his only degrees are a bachelor’s and a master’s from a then-obscure Illinois college.

Churchill’s lack of conventional academic credentials was apparently compensated for, at least in part in the eyes of those who hired him at the University of Colorado, by the “fact” that he contributed to the ethnic diversity of the school’s tenure-track faculty.

To the extent that Churchill was hired because he claimed to be a Native American, he would seem to be guilty of academic fraud. But the situation is worse than this.

Thomas Brown, a professor of sociology at Lamar University, has written a paper that outlines what looks like a more conventional form of academic fraud on Churchill’s part. According to Brown, Churchill fabricated a story about the U.S. Army intentionally creating a smallpox epidemic among the Mandan tribe in 1837, by simply inventing almost all of the story’s most crucial facts, and then attributing these “facts” to sources that say nothing of the kind.

“One has only to read the sources that Churchill cites to realize the magnitude of his fraudulent claims for them,” Brown writes. “We are not dealing with a few minor errors here. We are dealing with a story that Churchill has fabricated almost entirely from scratch. The lack of rationality on Churchill’s part is mind-boggling.” (Brown’s essay can be read here: http://hal.lamar.edu/~browntf/Churchill1.htm.)

Similar charges have been leveled against Churchill by University of New Mexico law professor John Lavelle, a Native American scholar who has documented what appear to be equally fraudulent claims on Churchill’s part regarding the General Allotment Act, one of the most important federal laws dealing with Indian lands. (Lavelle also accuses Churchill of plagiarism).

The saddest aspect of Churchill’s case is that, in regard to his identity, he might not be guilty of fraud in the narrowest legal sense. According to the News, Churchill has been claiming to be a Native American since his high school days in Illinois. It may well be that by this point he has genuinely convinced himself that he actually is an Indian.

Of course some people believe they’re Napoleon. But that’s not a good reason for giving them professorships in French history.