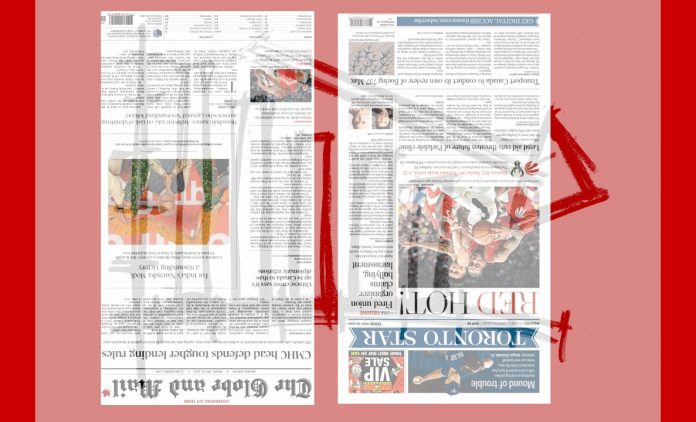 Journalists in Canada are represented by, among other labor unions, the giant, militantly left-wing Unifor. That union tweeted that they’re “Andrew Scheer’s Worst Nightmare.”

So they’re militantly against the Conservatives. And against small-c conservatives presumably. Arguably half the country. Therefore, they’re the last group a government of all the people would ask to sit on a panel of eight to decide what commercial news media should be subsidized by $600 MILLION in taxpayers’ dollars, on top of the state-owned CBC’s $1.5 BILLION. But that’s exactly what Justin Trudeau and the Liberals have done.

Of course the whole argument is ridiculous to start with. The government of a free and democratic and at least a marginally capitalist, free market country, should not be subsidizing the news media. Obviously. And yet, again, that’s what Justin Trudeau and his liberals are increasingly doing and planning to massively increase, ultimately making all the news media in Canada a “state media” of sorts.

Unifor is now ready to accept the invitation by their anti-conservative sister soljah Justin Trudeau, this week, to join seven other news groups, some of them pro-liberal-without-saying-so journalist groups, others I suspect as being anti-conservative groups, or rabidly anti-conservative militant groups like Unifor, to his newly announced table of anointed news elites. No reader groups. No plain citizens. No overt “conservatives.” No check or balance whatsoever on what is inarguably a liberal-leftist biased media which, with selective government funding, will become, indeed, Andrew Scheer’s worst nightmare. All of ours. It must be like a dream come true for liberals and the extreme left of Canada.

Eight news organizations will sit on Trudeau’s big sunny ways family round table to decide how to redistribute millions of your personal income — like $600 MILLION just to start — to themselves, this election year.

This scurrilous Trudeau/liberal/media scheme is what leftists of the past would have to derisively call a “media industrial complex” today if they were half fair. Speaking of Unifor’s “The Resistance,” Hillary Clinton, Grande Commissar of The Resistance, would have to call this a “vast left-wing conspiracy,” and she’d finally be right for once. The liberal media should once again not wait for a Robert Mueller-type report submission on this scheme before writing their impeachment stories. In this case they can go right ahead and call it what I call it: “collusion.” And go with impeachment too. The Trudeau team has basically announced he is in collusion with Canada’s commercial and public media, and its rabidly anti-conservative journalist unions. Using your tax dollars.

Speaking of actual collusion, the state-owned, totally-reliant-on-government-cash and therefore arguably undemocratic CBC, has teased no upcoming Passionate Eye series about this new threat to democracy. But some at the CBC acknowledged the problem yesterday, in one article anyway, boldly pointing out just some of the iniquities, like the Unifor nonsense. Shocking. But maybe the CBC is just jealous and see their scam monopoly crumbling, kind of like when a spoiled single child who got all the attention finds out mommy and daddy have a new baby on the way (— which, darn the luck, won’t be aborted!).

But the state-owned CBC calling this out as a threat to democracy would be sort of like when they call a Chinese media outlet “state-owned.” It’s just hideous.

Some journalists are just embarrassed by it all. “Deniers,” is what I think the media elite would dub them. I imagine they will be deemed by the media elites at the table to be unacceptable as real journalists (unless they agree to go to re-education camp in Papineau). This is after all, among other things, a death panel.

Postmedia columnist Andrew Coyne, a “denier,” writes for a paper led by a millionaire businessman who enthusiastically welcomes the government’s news media cash subsidies, and so, presumably, the advent of the death panel. So that’ll be an awkward family supper. In a Twitter rant well-worth reading Andrew Coyne wrote: “It is quite clear now, if it was not already: this is the most serious threat to the independence of the press in this country in decades.”

I assume Coyne meant “ever,” not “decades” (the previous “most serious threat” being when the CBC was created), and he knows it’s a nefarious scheme most often employed by fascist, socialist regimes who will lie and deceive and abuse and chip away at democracy like this in their quest for power. That is a matter of historic fact. “Settled science,” as journalists in the liberal media would absolutely call it.

It is difficult to know where to begin to deplore the process by which the federal government will decide which media organizations to subsidize and which not to. So let’s start with Unifor’s involvement.

“Unifor?” you may ask. “The flamboyantly anti-Conservative labour union?”

… If Heritage Minister Pablo Rodriguez had explicitly set out to bolster the notion that Canadian media are bought and paid for by the Liberal Party of Canada, he could have done no better. …

Imagine the financial problems the liberal media will face when the election is over and all that bountiful election ad money dries up; and if the subsidies scam also ends due to a Conservative victory, which is possible given their lead in the polls. The only ad buys the news media will be able to look forward to will be for Christmas, or what the media have all purposefully taken to calling “the holidays,” knowingly chipping away at our traditions and heritage despite how it peeves half the country.

Watch: they’ll all blame their problems not on their systemic, leftist agenda-driving, not on their left-wing, anti-conservative gaslighting, not on their willing acceptance of undemocratic, anti-market, liberal-left schemes like the competing, growing, state-owned media giant CBC, nor even the latest thing, their participation in this bastardization of the free press and the free market. No, they’ll blame the evils of capitalism. And they’ll be half right.

Previous articleWhy don’t governments act to protect Canada?
Next articleLeft-wing author Naomi Wolf gets a correction of a lifetime, live on air