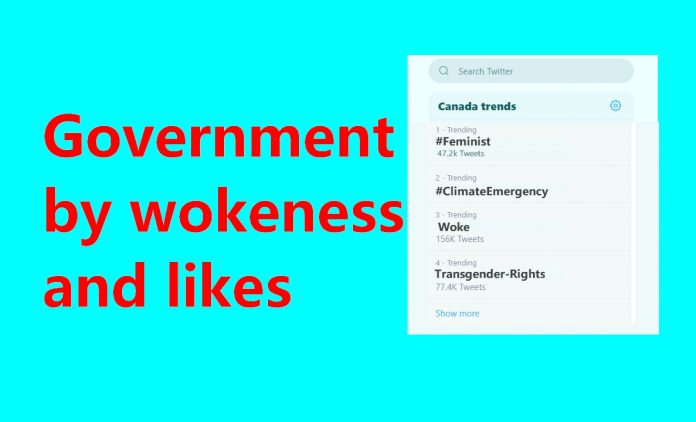 Last week I wrote about an answer given by Andrew Scheer after being asked by a reporter if his cabinet would be “gender balanced,” like Justin Trudeau’s. Scheer mercifully avoided the PC trap of answering in the affirmative, replying that in fact, maybe there would actually be more women, because he intends to appoint people on the basis of their qualifications. I thought that was a mic drop answer. (If only his other answers to questions carried as much gravitas and absoluteness.)

As I wrote, quoting MLK, Scheer would appoint qualified people based on “the content of their character.” And to do that, you’d have to look past the color of people’s skin, and their sex, and get to actually know their credentials and moreover, their character, and based on that, whether they are best qualified.

Many of Justin Trudeau’s marquee policies — from feminism to climate change to gun confiscations — seem to be grabbed from what the kids on twitter are retweeting the most. They’re shallow, trendy, politically-correct policies based more on platitudes than principle, including or maybe especially his “gender-balanced” cabinet — which he reaffirmed after his election victory. This is government based almost entirely on virtue-signalling. That’s the elixir he uses to gain and maintain power.

He won, yes, but this is in spite of his appearing to have learned nothing. And perhaps in spite of ourselves (or at least 33%) having done the same thing.

To Trudeau, sex trumps one’s character — a character which he does not even fully know or understand because character is so vastly inferior in value to the sex of the elected member. And moreover, clearly female trumps male, and that’s because, and only because, today’s cools and the woke swells will give him likes. It’s not because it makes sense. It’s not because it will guarantee the best shot at good government. It’s not because Canada is more important than his preening and burnishing of his progressive bona fides to the world.

Her sex aside, how, for example, could he truly have known Jody Wilson-Raybould, given the massive philosophical, legal, and political schism that developed almost right after she was appointed Justice Minister and then used a measured, careful, legal calculation based on fairness and morality, and in so doing crossed the Rubicon — Trudeau’s crass, vacuous political power calculations? He clearly didn’t know her at all.

Richard French seems to agree. He wrote, published just today in the Globe and Mail (yes today, not a month ago):

…The entire unedifying SNC debacle showed, first and foremost, that he had no idea of the person he had named as his minister of justice, no sense of who she was and how she thought and behaved. This is stunning.

It was not as if the crisis emerged in the months following her appointment. There was lots of time and many occasions for the Prime Minister to get to know her. An intimate knowledge of the character and personality of fellow politicians is the bread and butter of public life…

But Trudeau did not know or care about any of that. He had quotas to fulfill. Preening to be done. Likes to get.

Ironically, perhaps we should be glad, in a weird way, because if Trudeau chose the justice minister based on his or her character, he might have carefully selected an immoral lout who shared his political fetish for power — someone who would thus be malleable and compliant to Trudeau and his ideological henchmen. SNC-Lavalin and whoever else supports Justin Trudeau and the Liberals would all get off lightly, as was his desire, and presumably all those who supported Conservatives would be prosecuted to the fullest extent of the law. You know, like they do in tyrannical dictatorships around the world. This is where judging the character of the man running for office as prime minister comes in. And as a group, we have failed in that regard.

I thought we’d all agreed MLK enunciated the principles by which we should all behave. But things have changed apparently. MLK wasn’t woke enough. Now it’s back to color of skin, and sex now too. Oh and sexual orientation. Last week I heard one congressman in a U.S. committee hearing ask Mark Zuckerberg, CEO of Facebook, how many members of his new team were women, how many were white men, but also, how many were LGBTQ, as if to demonstrate the now complete obliteration of MLK’s profound verbiage. (The congressman, Democrat Al Green, was reportedly stunned when Zuckerberg answered that he didn’t have a clue. Missed here is what he could have said: “I don’t know, because it’s not about that. It’s about their qualifications.”)

In the interest of crass political expediency, Trudeau chooses to join the Al Greens of the world and thumb his nose at MLK and proceed along a path more trendy — one based not on logic or common sense or good governance, but rather on another of Trudeau’s now infamous vainglorious attempts to appear cool and “woke” and feminist — and to garner likes from the others who live in his weird global progressive echo chamber. And now here he is again in power. I’d say “God help us,” but of course God is out too.

To say this is behavior is akin to that of a childish teen on Facebook may be impertinent, but I believe serious people do not behave this way. And it doesn’t make for a serious country with the best chance for success.