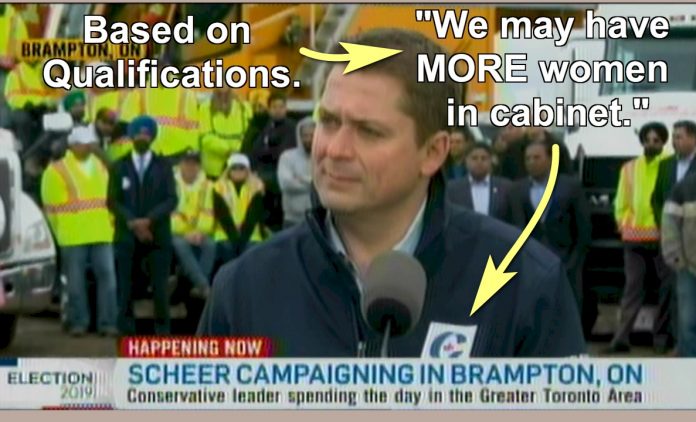 So it's "follow the science," and "the science says... to vote Liberal”? Many, especially the media, would dismiss "bible belt" politicians who insinuated that "God wants you to vote [whatever way].  This blowhard — and his disciples — should be treated no differently.
Read more

Nothing clarifies the difference between leftist progressives and conservatives more than questions and answers like this one; nor more clearly identifies and distinguishes the phonies and virtue-signallers from the truly equality-minded, reasonable, and logical.

After preambling it with the glories of Justin Trudeau’s alleged gender equality prowess, literally listing off the things he supposedly did for women’s equality, entirely gratuitously, a reporter finally asked if as prime minister, Andrew Scheer would have “a gender-balanced cabinet.”

Scheer replied (exact quote), “You know what? We will have a cabinet made up of highly qualified candidates. We will put the best people in the best jobs. We might even end up with more women in our cabinet, depending on the results of Monday’s election.”

A question I believe was set up to boost Trudeau ended up backfiring and being a winner for Scheer. So that reporter has some butthurt, I have no doubt. As do any other liberals who were listening to that live broadcast.

The notion of women competing and succeeding is based not on sex (nor “the color of their skin,” as MLK would say) or quotas, or virtue-signalling, but rather on their credentials and ability (or “the content of their character”), and the need to put the best qualified person in the right job — which may in fact result in more women than men in the cabinet — is obvious. It’s also Conservative policy. Obviously. Apparently the left is against that.

It should be uncontroversial. And unquestioned. It’s only questioned when you think it could be used as a weapon to corner what you perceive to be a rat.

This question also leads to a confusion. I’m confused as to the existence of “women” and “men” and whatnots. Liberals and progressives on the one hand want these gender names eliminated (as in the ever so woke Air Canada eliminating “ladies and gentlemen” greetings); and on the other, they want an entire national government based on certain numbers of these specific two (just two) sexes — and only based on sex. So there’s that.

Anyway, Stephanie Levitz, of the liberals’ Canadian Press division, was the woman (OK?) who asked what I think she thought might have been be another delightful gotcha question of the Conservative leader. In Levitz’s initial setup question, she seems confused as to her role — is she on the Trudeau campaign team? Or is she a reporter asking an honest question in good faith? Maybe it’s just a matter of how she self-identifies? I don’t know.

But all of this was par for the course. This was typical of what reporters do when confronting Scheer (“confronting” being the operative word here): they badger, argue, repeat already-answered questions on topics they think, hope, or wish make him unpopular amongst people in the reporter’s own ideological bubble — like the hideously repeated questions on his stance on abortion and gay marriage, etc., which literally no Canadians are asking about. And they set up questions designed not for answers, but to trip-up the Conservative and glorify the Liberals or even further Leftists.

Nothing new has been exposed here. Conservative women already know what Conservative policy is. As do other honest people. It’s just not often that it’s allowed to leak out like this in quite so public a manner — right on live TV when the media couldn’t prevent it from getting out or even filtering it. And being live, no anchors were able to roll their eyes, or visibly sneer… it was a wonderful moment in a sea of crap.

P.S. I have my own recording of this exchange, but in light of lawsuits by news media companies against conservatives, I’m not anxious to post it publicly. Here’s a video set up to the right spot: