Socialist super woke NDP leader Jagmeet Singh said, in answer to a question, “we don’t respect Conservatives, no.” Then he and his supporters all laughed and clapped uproariously for several seconds, and he moved on. No correction, no walkback, here’s the video (it should already be cued to the correct spot):

So just to be clear, here’s the transcript of that moment:

Reporter: “So just to be clear, you would not respect, you know, if Andrew Scheer wins the most seats, you would not allow him to form government. You would oppose that.”

Singh: “We don’t respect Conservatives, no. [hearty laugh from him, and uproarious clapping and laughter from everyone in room]”

He then went on to say “what I mean is…” but did not take back the insult, merely tried to rationalize why he felt that way.

That’s your party of “tolerance,” folks. And “inclusivity.” And “diversity.” It’s actually a party of intolerant posers and fakes. Dividers. Just like the Liberals.

BONUS: Here’s the exact moment after he said, “We don’t respect Conservatives, no,” and started laughing. The look on that gal’s face… 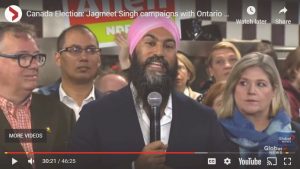 Responding to Jagmeet Singh saying he doesn't "respect Conservatives," Scheer says he respects people from the NDP, notes that he had family members run for them. #elxn43 pic.twitter.com/0yWDs1RJ5D 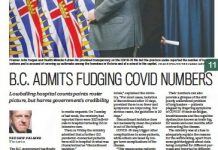