As predicted, last night’s liberalfest, the Oscars, once again revealed the total hypocrisy and arrogance and elitism of the liberal-left.

As my wife watched the Oscar pre-show to see what the liberals were wearing on the red carpet as they lined up to collect their shiny trinkets, I caught an occasional glimpse of the never-ending lineup of huge stretch limos and SUVs delivering the Hollywood elites to their TV pulpit so as to lecture us plebes about all the man-made global warming.

Some had trouble getting out of their limo and finding their way to the red carpet as they were blocked by a six-deep layer of limos and SUVs, delivering all the genius man-made global warming clerics who also demand an end to what they call Bush’s “blood-for-oil” war in Iraq.

So that was fun.

It’s also ubiquitous among liberals.  No, this hypocrisy isn’t limited to Hollywood liberals—they’re all the same.  In Hollywood, in schools, in national and provincial politics, and right close to home in local politics too.

I’ve pointed out that Liberal Frenchman Stephane (the “Green Guru”) Dion personally chooses to drive a 5-year-old SUV exactly like the one pictured below, instead of, say, a bike or a horse:

More locally, while I was being lectured by Academy Award winner Al Gore at the Oscars about “taking personal responsibility” and “doing our part as individuals” to end global warming, I was reading in our local paper about our own liberals who routinely lecture us from on high.

Here’s a picture of our Mayor Lois Jackson, who constantly lectures us about the global warming and even took pride in spending taxpayer cash to plant a row of palm trees (yes, actual palm trees at $1,500 per tree) along our main drag in anticipation of all the global warming, standing proudly beside her massive SUV.

Perhaps she needs a 4X4 to navigate through all her own BS without getting stuck. 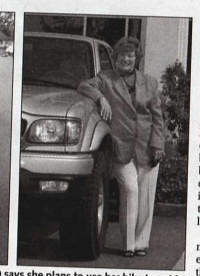 The South Delta Leader’s Philip Raphael reported a litany of excuses spewed by the Mayor about why she drives a huge SUV while lecturing us plebes about global warming and warning us that we’ll all be under rising sea water if we don’t take personal responsibility and spend billions and billions of dollars of taxpayer cash to end global warming.

Maybe he needs a Mustang Cobra as a symbolic gesture to the horse manure about global warming he utters all day long. 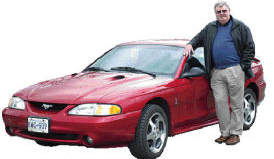 The South Delta Leader reports that he said, ” ‘Oh, I’m digging myself in hole on this one,’ … laughing as he somewhat sheepishly revealed his personal ride is a 1996 Ford Mustang Cobra…”.  Yeah, you dug yourself deep alright. In horse manure.  His wife drives an SUV he admits.

Another councilman, Robert Campbell, drives a Jaguar.  To meetings about global warming.  Don’t worry though, the South Delta leader reports that he said “We do a lot of things like installing high efficiency light bulbs and making sure we turn off lights we don’t need,” Campbell said.”  Another councilor drives what she calls a “small SUV” but which has a V-6 engine.  Understand that Delta is flat as a pancake and gets no snow in the winter.

You should check what your local politicians drive.  Unless they get around on bicycles or horses, totally ignore anything they ever say about global warming.  They have utterly no right to say anything.  Simply mock them as they should be mocked.  And of course vote for someone else—someone who isn’t a total hypocrite.