Damn the emails. I’ll do this every day if I have to. Or until I’m canceled.

Yesterday I came to the defense of Jessica Mulroney, who was cancelled last year by idiots at Bell Media, CTV, and other town criers of puerile left-wing Sycophantistan.

Today it turns out it’s another liberal, this one a very liberal liberal, Will Wilkinson, the vice president for research at the Niskanen Center and a New York Times contributing opinion writer.

For background, I peeked and found his Twitter timeline and (aside from the supposedly offensive one) his tweets and retweets appear to be more o’ that now ubiquitous left-wing team-player fluff, and rather quotidian anti-conservative pablum. Like many of the New York Times’ liberals or most any liberal, he appears to be embubbled, and utterly obtuse about conservatives and what or how they think, and, so, he appears to be a flat-out anti-conservative bigot (at least a bigot-lite) as a result (see the tweet below). But what he tweeted about lynching Biden was a freaking joke. Obviously. And unless we’re “cancelling” people simply for being idiots (and yes I could be convinced to cotton onto that idea, thus reducing the surplus population of idiocy on Twitter and Facebook, in business, politics and the media by 80%), this is completely mental. 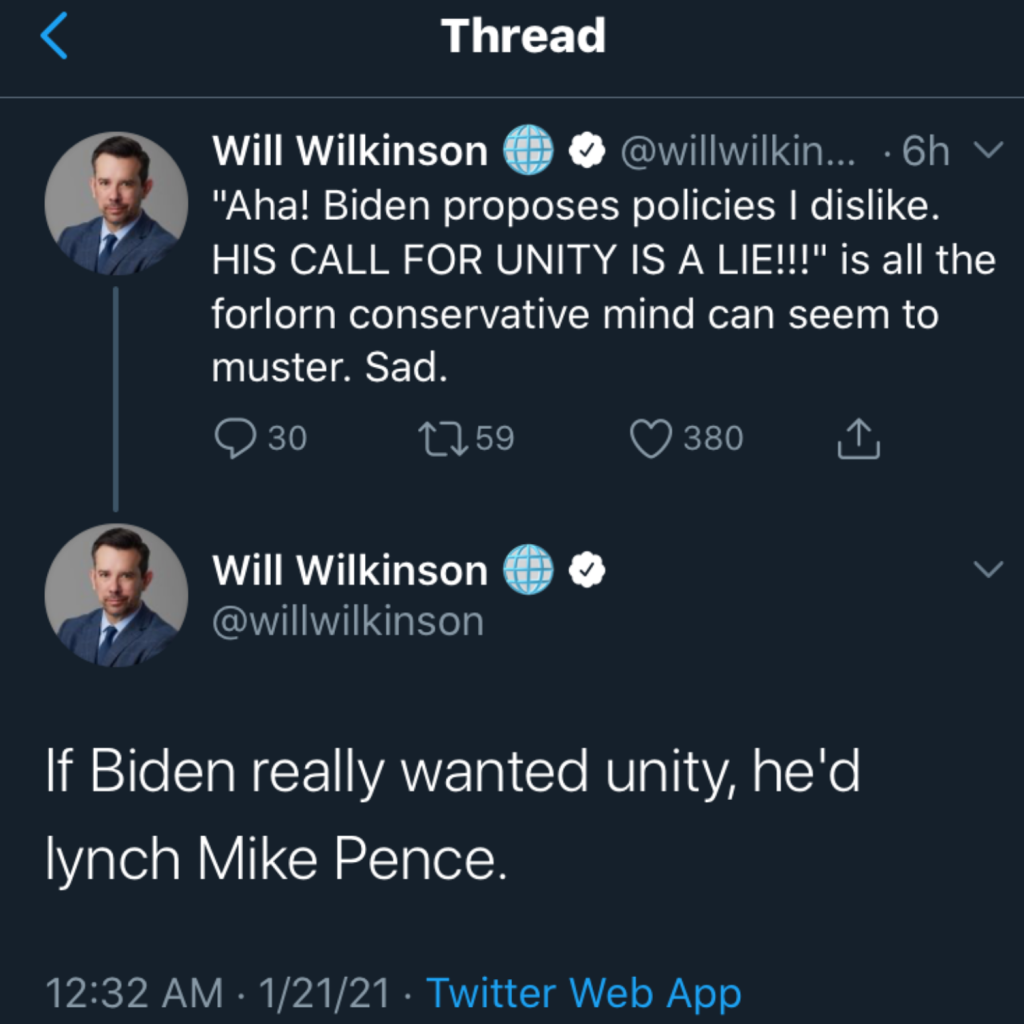 As fellow liberal (uh, fellow to Wilkinson) Glenn Greenwald (a brilliant liberal, in this contrasting case) wrote about it in his excellent Substack column today,

“… All of this is especially ironic given that the president of this colorless, sleepy think tank [Niskanen Center] — last seen hiring the colorless, sleepy Matt Yglesias — himself has a history of earnestly and non-ironically advocating actual violence against people. As Aaron Sibarium documented, Taylor [Jerry Taylor, president and co-founder of the Niskanen Center] took to Twitter over the summer to say that he wishes BLM and Antifa marchers had “rushed” the St. Louis couple which famously displayed guns outside their homes and “beat their brains in,” adding: “excuse me if I root for antifa to punch these idiots out.” So that’s the profound, pious believer in non-violence so deeply offended by Wilkinson’s tweet that he quickly fired him from his think tank.

“Whatever else might be true of them, the Niskanen Center’s president and The New York Times editors are not dumb enough to believe that Wilkinson was actually advocating that Mike Pence be lynched. It takes only a few functional brain cells to recognize what his actual intent with that tweet was, as poorly expressed or ill-advised as it might have been given the context-free world of Twitter and the tensions of the moment.

“Because this is the framework that we all now live with. It does not matter whether the anger directed at the think tank executives or New York Times editors is in good faith or not. It is utterly irrelevant whether there is any validity to the complaints against Wilkinson and the demands that he be fired. The merit of these kinds of grievance campaigns is not a factor.

“All that matters to these decision-makers is societal scorn and ostracization. …”

I could create a whole website devoted exclusively to the moronics of the left’s cancel-culture disease. If I do I won’t be putting it on any damned Amazon AWS servers however. That would be like putting a noose around my own neck and I’m not completely stupid.

P.S. Update:
A reader posted a really unfortunate (unfortunate for Wilkinson) bit of history on PTBC’s Facebook page in his comments to this article. It’s a tweet from a year ago. Here it is: