UPDATE:  NOTE:  It has come to my attention that someone is directly copying and pasting my material to another web site—a discussion forum site—under a myriad of different phony names, all claiming my material as their own, without crediting me as the writer. There are now several dozen such posts directly copying and pasting my written material.  I have written to the operator of that web site and will pursue further action if the perpetrator does not cease immediately.

Newsquippy items are added through the day.  Refresh the page, come back often, post comments, eat something, then repeat.  … On a personal note, getting blood test done today, so I’ve had to fast and I can’t have my morning coffee until after the tests this morning.  Plus I slept in this morning because of my 3:30 AM rise yesterday morning (see yesterday’s Newsquips).  So I’m not even completely sure I’m actually typing this.

1.  Haven’t seen one yet.  Then suddenly for some reason I gravitated toward this story:  “PQ leader gets reporters out of bed for morning walk” — …Marois had been frustrated by stories that she was too tired to run a decent campaign, and that she had cut back on evening events to deal with her fatigue.  So she challenged her tormentors to join her for her daily walk—and they were compelled to oblige.  …  At the end of the walk, she told the assembled throng that she hoped their little field trip would turn the page on any questions about her health. … Well yeah but now they’re concerned about her mentally.

2.  GOLLY YA ACTUALLY HAFTA KILL ‘EM before they magically appear on my dinner table, huh?  The Palin Derangement Syndrome continues in the liberal media in Canada and the U.S.  Here’s an article—real solid “journalism”, folks—an AP story in the Canadian media—about Sarah Palin in Alaska, at a turkey slaughtering house, where, as is traditional in the U.S, the President or in this case the Governor “pardons” one turkey, just for fun, and “saves” it from the Thanksgiving dinner slaughter.  But lo and behold, while she’s talking, other turkeys are being slaughtered in the background.. at the turkey slaughtering farm.  Wow.  Therefore, ipso facto, as a result, because of this, WHAT A TOTAL MORON, EH?  … It’s actually one of those boomerang things.  The media, in general, which goes out of its way to embarrass Palin, is biased to the point of actual hate, to the point where they’re actually corrupt.  The irony here is that they BELONGED on the turkey farm.  And the thing is, if you actually watch the video, you see how the media cameraman actually pans away from Palin and focuses in on a turkey farm worker who is putting a turkey into a de-featherer (or whatever it’s called).  The media basically created the moment.  Then wrote it up.  BUT GOD SHE’S A MORON, EH?  … Absolutely related story headlines:  “TROUBLE: ASSOCIATED PRESS to cut 10% jobs”… “NY TIMES cuts dividend, ‘reevaluates’ assets”…

3.    ON THE SAME cNEWS.canoe.ca PAGE as the above Sarah Palin bashing story, this AP story: “Great expectations await Michelle Obama” By Jocelyn Noveck—The Associated Press New York—  “Sure, there’s plenty of pressure on Barack Obama. But imagine being his wife.  The moving trucks haven’t even arrived, and already Michelle Obama’s being touted as the next Jackie Kennedy, the woman who’ll infuse Washington with a sense of style and vigor not seen since the days of Camelot…” …  I feel like I’m dreaming…

4. UPDATE to item #2 above: ARE THEY TRYING TO MIMIC THE CBC?  — The fantastic Media Research Center also caught the media sickness in action, in their CyberAlerts newsletter this morning:

MSNBC Turns Palin’s Pardoning of Turkey
Into Means to Deride Her
MSNBC took denigrating Alaska Governor Sarah Palin to a new low on Thursday night’s Countdown. With “BREAKING NEWS” ridiculously on screen, MSNBC ended the show, hosted by David Shuster filling in for Keith Olbermann, with more than three minutes of video of some turkeys being slaughtered by a man behind Palin while rotating chyrons [banners] hyperbolically declared:
• “TURKEYS DIE AS GOVERNOR PALIN TAKES QUESTIONS FROM MEDIA”
• “GOV. SARAH PALIN KEEPS TALKING WHILE TURKEYS GET SLAUGHTERED BEHIND HER”
• “GOV. PALIN APPARENTLY OBLIVIOUS TO TURKEY CARNAGE OVER HER SHOULDER”
• “GOV. PALIN NOT REALIZING INCONGRUITY OF HER WORDS VERSUS HER BACKDROP”
and
• “TURKEY-KILLING FOWLS PALIN NEWS CONFERENCE”

I actually took a look at the MSNBC news show in question—here are some of the banners, which are so much like CBC banners I actually laughed out loud as I watched the footage just now.

But don’t worry, you can trust the media to be fair and balanced.  It’s Fox News Channel, which presents both sides, which can’t be trusted.  See?

5. Noon, Pacific Time:  CONFIRMED, nearly (it’s about a Clinton, so lots of faux drama is involved): Hillary Clinton will accept The Great Obama’s invitation and become Secretary of State.  … Watch as the media rushes to build her up as the first WHITE woman Secretary of State.. in “Camelot”…  … Also – Timothy Geithner for Treasury Secretary… developing…

6. DAILY AFFIRMATIONS to steal election — The far-left “comedian”, Al Franken, a failed far-left talk-radio show host and also known as Stuart Smalley for his SNL skit, ran for a Senate seat in the last election in Minnesota against the incumbent Republican Norm Coleman, but the race ended very close, with Coleman ahead by 700-odd votes, then after one recount, 200-odd votes.  Franken continues to fight for recounts by contesting ballots like this one at left, which he contends could possibly be a vote for him.  … I’m Good Enough, I’m Smart Enough, and Doggone It, People Like Me! … They don’t vote for me, but I think they meant to! 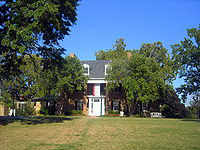 6. NOT ELITE—just “progressive”.  Like Chelsey Clinton before them, the non-elitists Obamas will be sending their daughters Sasha and Malia to the same elite PRIVATE school that the Clintons sent their Chelsey to.  Sidwell Friends School is a Quaker school.  All Sidwell students attend Quaker worship meetings, weekly. The school doesn’t rank the students because this doesn’t fit with the “Quaker Testimony of Equality”, in which all people are created equal in the eyes of God—but apparently that equality extends to outcomes as well.  Hi liberals!
… JOEL’S A SUCKUP AND IS GOING FOR EXTRA CREDIT:  According to Wikipedia, “Although nearly all Quakers throughout history and many today consider Quakerism to be a Christian movement, some Friends (principally in some Meetings in the United States and the United Kingdom) now consider themselves universalist, agnostic, atheist, realist, humanist, postchristian, nontheist or Nontheist Friend, or do not accept any religious label. … An especially notable example of this is that of Friends who actively identify as members of a faith other than Christian, such as Islam or Buddhism.”  … Hi again liberals!  … Lefty liberal Democrat Barney Frank, who is among the biggest culprits in the current financial crisis, and current DEM member of U.S. Congress and head of the banking and finance committee, also went there.  That worked out well…