Police: gun crime is due to homeless tent city. Government: keep the tent city! Liberals: take guns away from the law-abiding! 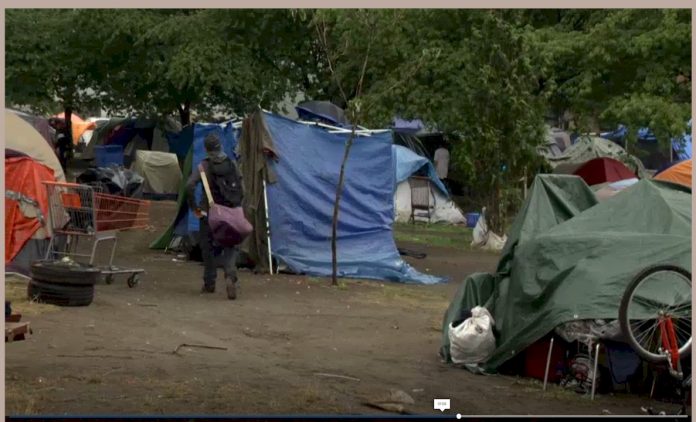 See if you can connect the dots. The liberal-left politicians, especially the city of Vancouver’s left-wing politicians, cannot. Or, as an alternative answer, they don’t have the balls to act properly because that would amount to admitting that their progressive ideology may very well have caused this in the first place, it is certainly failing to fix it in any case, and that it is endangering people and wrecking communities.

Six hospitalized with gunshot wounds after violent week in Vancouver

On Thursday night, [Deputy Police Chief] Chow told Vancouver park board commissioners that he believed the increase in violence was directly related to the tent city.

The homeless camp in a park at the heart of Vancouver’s Downtown Eastside is attracting so much violence, drug dealing and gangs that it has become an intolerable crisis, police say.

In a special presentation to the Vancouver Police Board on Thursday, Deputy Chief Howard Chow said police calls to Oppenheimer Park have skyrocketed, along with weapons seizures. There has been a noticeable increase in stabbings and attacks with weapons.

As well, he said, police have been “swarmed” on five separate occasions by large groups challenging them and that police teams of four are now the minimum required when they go into the park at night.

And lest there be any confusion about the main cause of the homelessness (this from the Star (Vancouver), four days ago, Sept 26 2019):

York said that people overdosing from drug use is the No. 1 safety concern for tent city residents. To that end, organizers have setup a 24-hour overdose prevention site, where people can use drugs in the presence of others who will be able to call for help if they overdose.

And just for even more clarity, as if you need it (the Star (Vancouver) again):

A presentation from the Vancouver Police Department (VPD) said that calls to police from Oppenheimer Park were nearly twice as high this past summer as they were the summer before. The VPD says it supports the board seeking an injunction to remove people from the park.

And now, from three days ago, Sept 27 2019, let us spot the total disconnect, or cognitive dissonance, or hypocrisy, or lack of principles, or lack of balls, or an inability to read, or to reason, or a mad combination of all of those:

Park board commissioners in Vancouver have voted not to seek an injunction that would have cleared a tent encampment from a Downtown Eastside park.

This is a massive FAIL by all levels of government who all choose not to connect the dots. The federal Liberals, with their election campaign promise to ban guns and their plan to confiscate guns owned by normal law-abiding Canadians, are pretending they’re connecting dots — but the dots don’t actually connect. This is deceptive and dangerous. They refuse to connect those dots that do connect and which would alleviate all the problems. This refusal is also dangerous, since these problems will thus get worse, and more embedded, moving forward. This is terrible politics. Nation-ruining politics.

As to guns specifically, because that’s all the Liberals can talk about in lieu of the actual problems, the Vancouver Police Chief has been quoted before:

Vancouver police Chief Adam Palmer, who heads the organization [The Canadian Association of Chiefs of Police], says Canada already has strong firearms regulations and no other law is required. …

… Palmer says in the majority of cases involving gun violence, the handguns being used are already illegal and it makes no sense to ban something that is already prohibited.

“In every single case there are already offences for that. They’re already breaking the law and the criminal law in Canada addresses all of those circumstances,” Palmer said Wednesday at the conclusion of the association’s annual conference.

Backgrounder concerning the politics: Let me borrow from a recent post of mine on largely this same topic:

Vancouver has been run by liberals — and much further leftists — forever. BC is currently run by the socialism-espousing NDP (sharing power with the leftist Greens), and before that, by the very socially liberal BC Liberals. Canada is run by leftist Liberals. Vancouver’s east side, in particular, has been represented by far-leftists forever. Wikipedia says: “Vancouver East is known as a New Democratic Party stronghold; the NDP and its Co-operative Commonwealth Federation predecessor have won all but two elections in the riding since its creation in 1933.” Currently, the NDP’s Jenny Kwan — a radical far-left-winger — is the MP. The provincial MLAs representing the area are Melanie Mark, and Shane Simpson — both of the NDP.

How’s that workin’ out?

Previous articleCineplex stands up for freedom of speech: Will allow Jordan Peterson film to be screened.
Next articleCHEERS! Kirstie Alley tempts fate with some honesty about Trump